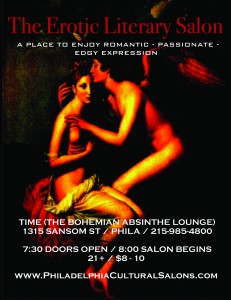 KD: What would you most like people to know about Susana Mayer?

Susana: I have recently reinvented myself as a sexologist, receiving my MA in Public Health 2005, and Ph.D. in Human Sexuality 2009. I am not a writer of erotica, except for the occasional titillating emails I send to my beloved.

Presently, I am working on several projects; a unique anthology, ebook form (more info. can be found at the Salon’s website) and a non-fiction self-help ebook to better understand the complexity of libido, sex drive and sexual desire. Bibliotherapy is one of my passions.

The social messages women have been receiving did not allow “good girls” to admit to enjoying fantasies they consider pornographic. Based on media marketing, our society allows men the liberty of enjoying hard core material, whereas women are relegated to fantasies spurred on by soft core erotica.

Unfortunately, but ultimately most fortunately, the public space where the Salon was to be held could not discriminate against men. From the very onset the Salon attendance has been approximately equal among the sexes. Ages range from twenty-one (liquor law restrict minors from attending) to mid-nineties. Couples, singles, poly — all sexual orientations and an ethnic mix all attend the Salon.

As the host of this event I try to keep the evening flexible, open to the possibilities of discussions, critiques and Q & A. The featured presenters, number of readers and attendee’s responses all impact how the evening will proceed.

It still surprises me when I hear attendees express their gratitude for having a venue to share their sensexual* writings sans censorship. Remarks like; “Susana is doing a very brave thing….It’s hard to overstate what a remarkable event you produce each month….Philly needs something like this,” remind me there are no other events of this kind presently in this area and few in the entire country.

People have confided in me how writing and sharing their words have helped them deal with a myriad of issues. Often this is the only occasion they have to hear how others express their sexuality. Exposure to these writings, especially journals and first person works, have given them the opportunity to reflect on their own sexuality. It can be of great comfort to know that there is such a variety of styles to creating sexual pleasure. For those who are troubled by sexual pleasure, the sharing of words may assuage their guilt.

The Salon has also given victims of sexual abuse an outlet to share their shame. By giving voice to their distress, in some instances the mere act of sharing has relieved them of the burden of shame. For others the control of the pen has allowed individuals to rewrite their sexual history, enabling them to cope more positively with their traumas.

Some people attend the Salon just to enjoy a night out with their friends, or it can be an unusual place to take their date. For an increasing core group of regulars, it is a community of like-minded people who enjoy sensexuala*.

The Salon is many things to many people, but one thing is a constant – each Salon is unique. I never know how the evening will progress, since each

month the readings and featured presenters vary. Similar to my daily posts at the Salon’s website, I lend my voice to this event by offering news items with my sex positive spin. Individuals are given the opportunity to view a sexual newsworthy item from a different perspective. As a muse for this event I feel these items not only educate but can be used as research material for their writings.

The Salon also continues via the web between gatherings. Those unable to attend because of distance constraints are able to share their works on the site, while enjoying some of the readings from the Salon. A professor of English in India expressed his gratitude for having a community that would enjoy his writings and comment on them.

I believe the mainstreaming of sensexuala in Philadelphia is slowly becoming a reality. The first year the Salon averaged between 20-30 people. These numbers have climbed to 60-80 attendees any given month.

K D: The Salon sounds like such a wonderful community to be a part of, and I think it’s fabulous that there is a website where those outside of Philadelphia can connect up with that community. You must have so many amazing memories of the Salon, Susana, can you tell us, what was your most memorable experience of the Salon?

Susana: The Salon’s nonagenarian, Frances (she’s my Chosen Mom), read the best seller, “Go the FOK to Sleep.” Can you envision a 94 year old, white haired, 4’6” slim built, beyond wrinkled woman, armed with elocution lessons from grade school (sans microphone) reciting this adult story disguised as a children’s book to Salon attendees? She brought down the house. I have extended an offer to the author to attend in May to hear her once again read this piece. I hope to get permission to video tape and post it on youtube and my website. Can’t imagine him declining.

*sensexuala/sensexual. A combination of (sensual & sexual) that does not carry the same judgmental values as those attributed to erotica and pornography. You get to enjoy the value of the piece, eliminating the need to discuss the sub-genre classifications.

K D: Thank you, Susana, for sharing with us. It’s been such a pleasure to interview you, and you’ve raised so many other wonderful questions that I’d love to pursue further that I hope you’ll come back again soon.

Emerald Talks about Pink Floyd, Being Tied Up, and Her Amazing Story, ‘With Random Precision’ → ← Looking for the Wintergreen with Trish DeVene