Sex and creativity are often seen by dictators as subversive activities. 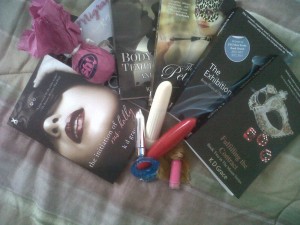 For the nay-sayers, abstinence has long been touted as a way to focus sexual energy for creative purposes. On the other hand, a study at the University of Newcastle-on-Tyne and the Open University showed that professional poets and artists had almost twice as many sex partners as other people. The study also showed that the number of sex partners increased as creative output went up. The conclusion drawn was that the more creative you are, the more sex partners you were likely to have.

Yes, the basic biology of it’s obvious, but we humans haven’t had sex simply to procreate in a very long time now. We’ve evolved to want, to expect, even to need more from the sex act than just the next generation. Perhaps that goes hand in hand with the evolution of what civilizes us, what sets us apart from our animal cousins — at least in our own eyes. For humans, many of our basic needs have evolved two meanings. First there is the concrete realm in which we’re born, nurtured, thrive, pass on our genes and die. But we develop another level of meaning when we no longer have to use all of our energy just to survive. When starvation is no longer an issue, food and its preparation and presentation becomes art. When keeping out the cold is no longer an issue, clothing becomes fashion, and magazines tell us how we can be walking galleries for the art of clothing. When finding shelter from the elements is no longer an issue, the very homes we live in become an artistic expression of ourselves. Artistic expression, for us, has become as important as function.

But all of these necessities are concrete. Sex is not. In the days of our ancestor, sex was the magic by which two people become three. Today sex is the magic by which two people become one, or by which one person becomes more herself or himself. Procreation has given way to re-creation, on the one hand, but on the other hand, how can an act that has evolved from the very need to create the next generation be rooted in anything but creativity?

How can the process of creating not be sexual in nature? Writing a story is a penetrative act resulting in something larger, something much more alive than the words on the page, than the idea conceived. That’s heady stuff. That’s the writer in full rut. It’s intimate, it’s messy, it’s rough and tumble, it’s voyeurism and exhibitionism and full-on heat. If it isn’t, then there hardly seems to be a point.

That being said, anyone who has had good sex, lingering sex, or even remembers a good teenage feel-up when time wasn’t an issue, and suddenly seemed no longer to exist, will recall that the end was subsumed in the means, the wonder of the act itself, the amazing intimacy with the other. Any writer or artist knows that experience up close and personal. At some point the creative act itself becomes the sum total of existence. The writer’s world shrinks to and expands out from that act, and the end no longer matters.