The Music Behind the Book – Cameron D James (@Cameron_D_James)

Bump and Grind, part one in the five-part Go-Go Boys of Club 21 series, features, well, go-go dancers in a club.  Whenever I write, and especially while writing this book, I listen to music and the music usually sets the mood for my words.  So, for Bump and Grind, I found I was listening to a lot of electronica, club music, and other songs that really get you moving.  It was actually kind of hard to keep typing and resist getting up and dancing.

It took several re-writes and, in the end, several nudges and strongly-worded suggestions from my editor.  I think the final product has that captivating quality to it that I had wanted right from the start.  Through the stages of writing and editing, I could see I was close to what I was trying to achieve, but I just wasn’t quite there, so it was a huge relief when the pieces started falling into place.

My hope is that the experience of music and dancing in the club is as vivid and detailed as the hot sex and the deep character emotions.

To get you in the mood, and to give you an idea of the kinds of things I was listening to while putting Bump and Grind together, I thought I’d end this with some of my favourite electronica and club tracks.  🙂

Just Be by DJ Tiesto

This Light Between Us by Armin van Buuren, featuring Christian Burns

Beautiful Life by Armin van Buuren, featuring Cindy Alma (and the entire album this comes from, Intense, is a piece of musical art)

Let Me Go by Young London 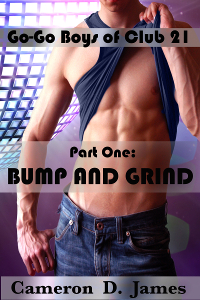 Normally, I shoot first, earning me the prime spot by the DJ. Ken usually comes shortly after me; he claims I get him excited. Lance, our new guy, he’s always last and ends up with the crappy spot by the pool tables.

Today, I decided to try something different—a strategy, if you will—to teach Lance an important lesson about being a go-go boy. I yanked down the front of my shorts and let my cock hang out, then grabbed it in my fist, stroking up and down the shaft. In front of me, Liam and Ken stood with their shorts tucked under their balls as they pumped with vigor.

I held back, loosening my grip just a bit, but still keeping it tight enough to stay hard and throbbing. I grunted and faked an impending climax, hoping it would give the other guys incentive to rush to completion.

“Sorry, Liam,” Ken said as he came down from that high of orgasm. I doubted Ken was actually sorry—he was definitely the bad boy of our trio. He drank, partied, and had a high-octane sex drive.

He stuck his tongue out at me, then crossed his arms and watched Lance and I battle to the finish. I kept stroking, making my effort look convincing. Lance fixed me with his usual cocky stare. Lust glazed his eyes too, no doubt fuelled by the actions of his fist.

Lance had joined us three weeks ago and I didn’t know too much about him. He was a quiet jock, a much better fit than Aaron, the airhead twink who he’d replaced. Having a jock in our small group was good for bringing in more customers. Ken and I were well-toned and we all had boyish charm—it was part of the job, after all—but Lance’s body was hard and toned, and packed with an impressive array of muscle. And boy, could he dance.

I didn’t realize I’d stopped stroking until Ken said, “You planning on coming?”

I shrugged, letting go of my cock. “I don’t think it’s happening tonight…probably shouldn’t have tugged it this afternoon.”

Lance and I pulled up our shorts too. I smiled at him, trying to give my best look of sheepish defeat.

“Hmm…are you trying to teach me another one of your go-go boy secrets?”

I grabbed my thick bulge and gave it a shake for him. “See this?”

Lance looked down at my basket and bit his lip, then reached in his shorts and adjusted himself. “Mmm. I get it. Don’t come so you’ve got a bigger bulge.”

“The bigger the bulge, the bigger the tips, no matter where you dance. I’ll prove it to you. I plan to make a killing tonight. Tomorrow, you can try and do the same. I bet you’ll make more than your usual thirty-seven bucks.”

I looked at Lance—he would keep a straight face if I lied. “We’re talking about bulges,” I said.

“Oh…in that case, that’s definitely a bulge I like.” Ken grabbed the front of my tight shorts, groping my cock and balls.

I swatted his hand away. “No touching unless you’re tipping. You know the rules.”

Ken laughed and swiftly turned around. He slapped my ass as he passed me. “I like your butt better than your bulge, anyway.”

Liam loves the life of being a go-go boy—dancing, partying, constant adoration from hot clients. The only thing he has to worry about is if he’s using the right moves as he grinds to the beat to win the affection of the highest tippers.

Cameron D. James is a life-long lover of books, voraciously reading everything from the classics to sci-fi, romance to science and nature, and thrillers to erotica. Understandably, a love of books led to a love of writing, having penned his first story in grade seven (about stolen baseball cards). Having written millions of words by now, Cameron now focusses on one of his favourite genres — gay erotica.

Cameron is a fan of Star Trek, having seen every episode of every series (including the animated series) and every movie at least twice. In addition to Star Trek, Cameron also loves physical exercise and seeing how far he can push his body. He’s taken kickboxing, Bikram hot yoga (that’s the super hot and tough one), diving, personal training at the gym, and likes his regular Wii workouts (seriously, they’re a lot more intense than they look).

Other interests include listening to electronica music (particularly Armin Van Buuren), puttering around the house (and attempting to grow a garden), and gawking at cute twink baristas at the various coffee shops where’s he’s such a regular that he’s known by first name.

Sex and Creativity → ← The Alternate Universe of Tight Deadlines