Selective Memories and the Gift of New Beginnings

I’m sitting on the terrace at the Hotel Rixos Libritas in Dubrovnik, Croatia. It’s the first time I’ve ever gone away for 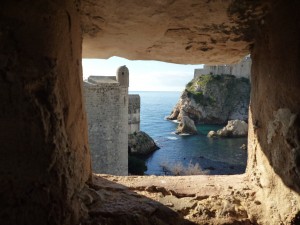 Christmas. It was Raymond’s suggestion, and an inspired one it was. I’ve not been back to Croatia since the war. Before that it was my home for four years. It’s where I met and married Raymond. A Louisiana Boy and an Oregon Girl had to go all the way to Croatia to meet and fall in love.

I can’t lie. Coming back is something I’ve put off for all these years, afraid of what I’d find, afraid of the change and haunted by those last memories as we left ahead of the tanks, as the place I loved fell apart before my eyes. I remember making one last phone call at the post office – no one had a phone at the time — to my former roommate, who was Bosnian. I was surprised we were able to connect at all. I told her we were leaving, asked if her family was safe. We’d been good friends. We didn’t know if we’d ever see each other again. The phone line went dead before we could say good-bye. Then Raymond and I packed two bags each and left everything else in the flat. One of the refinery drivers where Raymond had been working at the time drove us to Belgrade, which was the only airport still open. That night, while we slept safely in the Intercontinental Hotel, the national highway closed and the tanks rolled. Yugoslavia fell a
part, horrible things happened to people I loved, and I walked away.

I suppose I was a coward not to return earlier, but I never claimed to be otherwise. And even though Dubrovnik is a 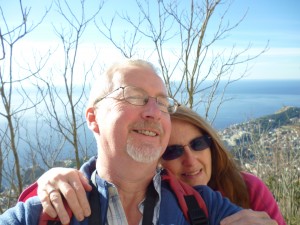 long way from the Bosnian boarder where Raymond and I were living after we married, I felt the knot in my stomach tighten as we sat down at the airport at Cilipi. Then we got into the taxi and the world righted itself as I spoke my rusty Croatian to the driver, and he understood, as the music playing on his radio was Croatian, as I saw signs in the language I’d loved and lived in for four years and I read them in whispers so that my tongue could feel the language again. The sea was a deep rich blue off the rocky Adriatic coast and our driver told us in Croatian that it was always blue when the temperature of the water dipped below fifteen degrees. He spoke and I understood, and spoke back awkwardly at first. Some of my words were missing and the grammar was rusty, but the rhythm, like a heartbeat was still there.

It’s my first time in Dubrovnik. I lived in Croatia four years and never visited because I thought I had all the time in the world. When I lived in Zagreb, I couldn’t imagine wanting to be any place else. And being back now, it’s not hard to remember why I felt that way, why I loved the place and the people so much. 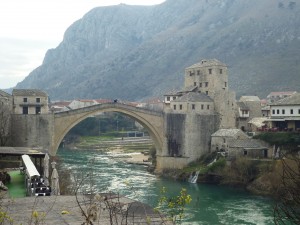 It’s easy to look to the future in Dubrovnik. The city is vibrant and the people are friendly and energetic. Even after being under siege for nine months during the war, the place has been rebuilt and no one would question for a moment that it is the Pearl of the Adriatic. The food is that delicious blend of Croatian, Italian and wonderful seaside flavors. The café bars are full of locals and a fair amount of tourists even in the off-season.

But yesterday we took a trip to Mostar in Bosnia Herzegovina, and looking to the future was much more difficult. The buildings are all recent, rapidly built, and in varying stages of completion. Most everything was destroyed during the war, and the remains of bombed-out buildings are everywhere. Mostar is now a city divided – Catholics on one side, Muslims on the other, and the bridge, the incredible stone bridge that stood for 500 years before it was destroyed in 1993 is once again rebuilt. But there’s no looking at it without being reminded that something so seemingly indestructible could be destroyed so quickly. As I watched the film of that destruction, I was reminded again just how
thin the veneer of civilisation really is, and how incredibly fragile all that makes us human, all that rises us above ourselves, all that makes us more than blood and bone really is. 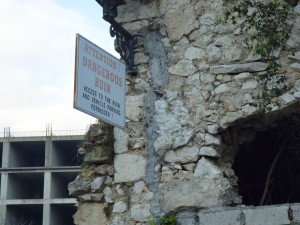 As we explored the Old Town, on the left hand side of the city, the church bells began to peel. Not seconds later, on the right side, the call to prayer sounded from multiple minarets, and the two in my head became a cacophony of noise breaking the peaceful winter air, while all around us people went about their business trying to make a living in a place where unemployment is over 40%

The bridge is rebuilt, but something was destroyed that may never be rebuilt, and I guess that’s why I stayed away so long because I remember what it was like before the destruction. The stone sign on the bridge carved in English reads Don’t Forget 1993 and I can’t help wonder what should a people remember and what should be, if not forgotten, at least mourned, and moved beyond. How much suffering is caused from remembering too well, or from remembering selectively?

In the night, I woke to a neighbourhood dog howling in the darkness. The hairs on my arms stood at the sound that seemed so lonely and desolate. This morning, we woke to the church bells ringing in Christmas Day. Right now church 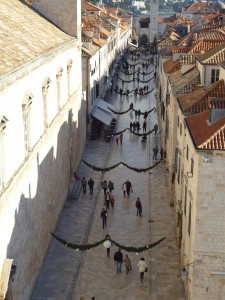 bells are ringing all over the city, and I’m looking out over the peaceful Adriatic to the islands and the mountains beyond. Coming here was a gift, and I have laughed and I have cried and I have found a place where I can begin to heal from wounds that seem so negligible in comparison to the wounds of those who have lived through the destruction and lost so much. And yet the four years I spent in the Former Yugoslavia have moved me more deeply and changed me more completely than any other experience in my life. And though I’ve been away for a long time, I’ve taken the place with me in my heart every day since. To return as we have in a time of celebration and reflection, to have the place I loved restored to me with all the wounds, the battle scars and the vibrant laughing memories is truly a gift of new beginnings.

In the time of new beginnings, I wish all of you good memories, healing of wounds and hope and love for the New Year.