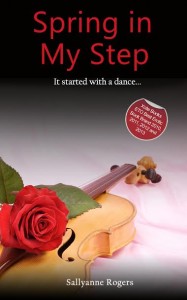 Blah blah beer guts, blah blah beards, blah blah old men… the lazy stereotypes around Morris dancing annoy me anyway. There are actually loads of dancers under 30 these days, male and female, and while not everyone can be super-model beautiful, there are plenty of fit bodies and sexy movers to admire should you stop by a local folk festival. There are quite a few contemporary takes on the whole business, as well. When I first started dancing, I belonged to the Prince Albert Morris, a team who mixed folk traditions with BDSM and fetish regalia and appeared on TV several times during the late 1990s: nowadays there’s a Steampunk Morris side who dance to classic rock tunes, and the traffic-stopping Belles of London City in their corsets and petticoats, among others.

Of course, there’s a certain amount of tension – and there always has been – between traditionalists and modernizers. That gave me something to use as a source of the conflict that would drive the plot of Spring In My Step. If my hero and heroine were attracted to each other but on opposing sides of the What Morris Dancing Should Be Like debate, they would have to work out a way of reconciling their differences to get to their happy ending. I did draw on a variety of things that happened to me during my time with Prince Albert, particularly the fact that we were originally put together at the request of a TV company. Adding a camera crew who were making a documentary to my story was the factor that made everything fall neatly into place.

I don’t know if Spring In My Step will encourage more people to take up Morris dancing in the hope of finding a sexy dancing partner of their own, but it would be quite cool if that happened.

Spring in My Step Blurb:

When Cath meets Robbie for the first time, she decides to hold back on telling him she’s a Morris dancer who’s about to be featured in a TV programme about contemporary British culture. She’s not expecting more than a one-night stand in the first place, so there’s no need to complicate things. However, what started out as a bit of fun looks like it could turn into something more, as the two of them find their mutual attraction too strong to resist.The documentary crew are on the hunt for juicy controversies in the run up to the May Day festival at Waterleigh Bridge, and it seems that Robbie has a secret of his own. If he and Cath find out the truth about one another, will it bring them closer or tear them apart?

Buy Spring in My Step Here:

Sallyanne Rogers has written articles for adult magazines including Forum in the past, and has previously worked on market stalls selling vintage clothes and magazines. This inspired her first novella for Xcite, Midwinter Heat. She has also been a morris dancer for about 15 years.

Her website is http://sallyannerogers0112.wordpress.com and she is on Twitter @dswsallyanne and on Facebook as Sallyanne Rogers (there is more than one person by that name, though)