Details and links … oh and a really pretty cover! That’s what I’m all about today! 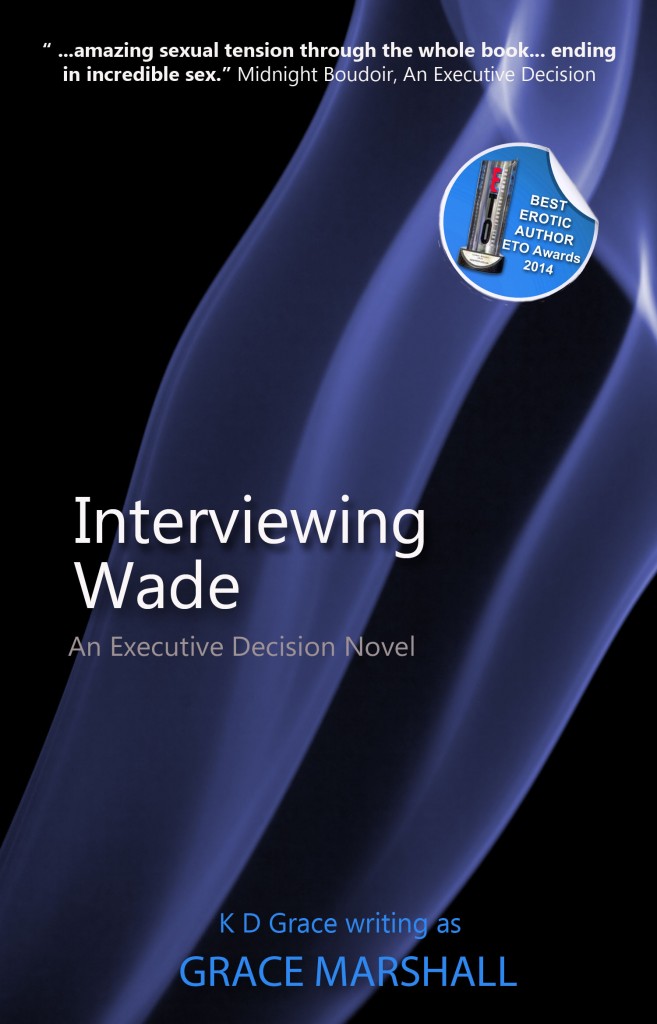 I’m very excited to share the lovely cover for Interviewing Wade! I’ve been waiting with bated breath, and Xcite has done me proud. Also notice the very nice little ETO winner badge in the corner! Proud much???

In edition to Wade’s very wonderful cover, the links to pre-order are now officially up on Amazon, and I’ll share those with you at the bottom of the post.

I’m SO excited to finally be able to share Wade’s story! Ever since An Executive Decision came out with Ellis and Dee’s story, readers, who loved the novel were clambering for reclusive, nerd genius, Wade Crittenden’s story. Wade is the creative genius behind the fabulously progressive, green company, Pneuma, Inc, which he and Ellis founded together with the Late Beverly Neumann. While Ellis and Dee work in the light-filled, glass and steel executive suites of the Pneuma Building, which Wade designed, Wad’s realm is the extensive basement and sub-floors affectionately known by everyone else as Wade’s Dungeon.

The deeper Ellis went into the warren Wade had created since the building had been completed, the more it felt like his friend’s domain, and the more it reminded him of the wild, deep twists and turns of the man’s mind. … Ellis moved down the hall to an elevator that he knew wasn’t on any of the blueprints. A good deal of Wade’s Dungeon wasn’t on the blueprints, and he supposed that was a real legal worry if anyone ever found out, but Wade was a law unto himself and never without good reason, even if no one else quite understood what that reason was. Ellis knew, in part, it was Wade’s effort to create a safe space – not so much for him, as from him. As sorry as that made Ellis, he was glad that Pneuma Inc had at least made it possible for his friend to do what he felt he had to.

What happens when the Northwest’s most intriguing, and richest recluse reluctantly agrees to be interviewed by the Northwest’s most talented investigative journalist, Carla Flannery? Carla always gets her story, but sometimes that means making enemies. Wade’s ulterior motive for allowing the interview is to keep her safe by keeping her close when her life is threatened by an unknown stalker.

‘Seriously? I’m sleeping here?’ Carla walked into the middle of The Suite in the Dungeon and looked around. When she turned back to Wade, she saw a faint blush on his cheeks.

‘Well, hell. I suppose you could use the bed for a trampoline and sleep on the couch, if you want. It’s all the same to me.’ He nodded to the closet. ‘Dee sent over the things you left at Ellis’s this morning and had her personal shopper pick up some more.’

She pulled open the closet door and gave a low whistle. ‘Wow! I didn’t own this many clothes before my apartment was vandalised. And I certainly didn’t have any of these brands.’

‘Caitlin does love to shop. Or at least that’s what Dee tells me.’ He gave a grunt of a chuckle. ‘The woman keeps threatening to shop for me.’

‘Can you imagine such a thing,’ she said, running her hand over a silk blouse that probably cost more than her entire wardrobe put together. And she did try to imagine such a thing. What would Wade Crittenden look like in Armani? She couldn’t get past the way he looked in a black t-shirt and low-rider jeans.

He came to stand behind her, straining his neck to peek into the closet. Then he shrugged. ‘A bit extravagant, really, if you’re going to be in the dungeon with me. You won’t need much.’

She turned, practically nose to nose with him and offered a wicked smile. ‘The nurse in the ER warned me to be sure I had a safe word, you know, for hanging out in the dungeon and all.’ She was surprised when he didn’t step back, and her pulse jumped and fluttered when he rested a hand on the closet door above her shoulder, effectively trapping her in place.

‘You’re the one doing the interview, Flannery. I figure it’ll be me needing the safe word.’

Wade grabbed the ball and bowled yet another strike.

‘I’m better when no one is bothering me.’ He tapped his fingers on the ball return in a definite ‘get-lost-Carla’ rhythm.

‘Look,’ she shoved out of the seat and came to his side again. ‘You’ve been hounding me to be a good girl, to play it safe, to stay out of danger, well…’

He picked up the returned ball and took his stance, with her standing right beside him.

‘What could be safer than me interviewing the mysterious Wade Crittenden of Pneuma Inc?’ She followed on his heels as he positioned himself, took three quick steps and let the ball go. She nearly rear-ended him at his quick stop.

He turned suddenly and she found herself cheek to chest with him. They were both breathing much harder than their little bowling waltz demanded. Then, fuck if he didn’t lift her bodily over his shoulders, carry her back to the chair and drop into it like an oversized sack of potatoes before the ball flattened all the pins. Again. With a hand on either side of the chair, trapping her there, he held her gaze, nearly nose to nose. ‘I may be a lot of things, Flannery, but I’m not safe.’ Before she could protest further, he turned and bellowed, ‘Clyde, Ms Flannery’s leaving. Show her out please. And then lock the damned door.’