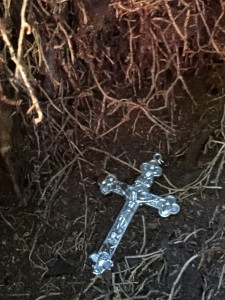 I think a lot about the value we place on things, and I don’t mean in a materialistic way. I mean in a writerly way. I’ve always found myself drawn to detritus and things left behind. Everything left behind has a story, and because of that, everything left behind carries its own little bit of magic, no matter what it’s actual monetary value.

I mentioned when I was in Oregon that near my sister’s house there was a trailer park where a pick-up truck had been left derelict, the back end full, as though someone had vacated a flat in a hurry and then left the truck containing all their possessions as well. It was loaded down with all kinds of household items from a wok to a rocking chair, from a mangled computer table to a battered rodeo practice dummy. My imagination went wild. For me it was a treasure trove of ideas to be filed away for future stories.

I’ve found countless gloves and hats and hair scrunchies on walks that I’ve taken. I’ve found money, wallets – which I returned, underwear – which I did NOT return, shoes. At home in my jewelry box I have a bird skull I found on a walk once, bones like ivory, and every delicate one of them in perfect condition – obviously that I kept. On a walk once in Oregon, I found an unbelievably beautiful geode, broken 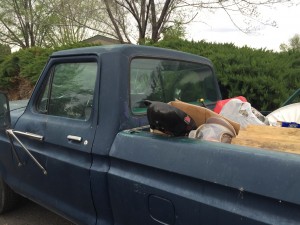 open to expose the beautiful crystals within. Trouble was, it was huge, way to heavy for me to carry back on a ten-mile, very steep trail. But I found it, I saw it, I filed it away for future use. If you follow my blog, you know about all the lovely pyritic ammonites I found on the beaches around Lyme Regis. I’ve found bones, bird eggs, feathers, books and large sparkly rhinestones, belts, buckles, ribbons and bracelets among lots and lots of other things, some valuable, most not so much.

But on this particular occasion, I found a silver crucifix about three inches long, half buried in the powdery dust of the path. There was just enough of it exposed for it to catch the sun as I looked down. I just happened to be walking through a stretch of woodland dotted with lots of very old yew trees. Yew trees are often associated with churchyards and holy places, and at the time I was 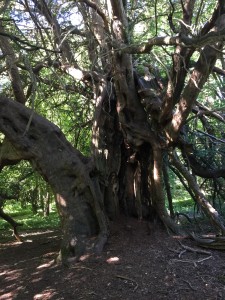 plotting out the next chapter of my online serial, In The Flesh. That being the case, the crucifix and the yew tree seemed appropriate symbols for inspiration for a story that involves a demon lover in a deconsecrated church.

So far the crucifix itself hasn’t figured into the story, but it definitely inspired what happened next. As for the yew trees,
well, when a good bit of the story takes place in an neglected overgrown church yard, it seemed appropriate for me to spend some time, clenching the crucifix in my hand and wandering among the yew trees. I took dozens of pictures and worked out at least that many scenarios in my head for the week’s edition of In The Flesh.

Afterwards, I stuffed the cross in a small pocket in my backpack and forgot all about it until just yesterday when I was digging around for something else, and I was reminded again how often detritus is a touchstone for story. So often, even when that detritus is not something shiny and silver and something worth hanging on to, it can be the seed of story, or at the very least the 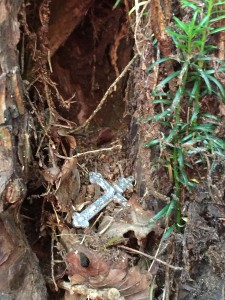 seed of an idea that will become a part of a story. Things for a writer, as often nothing more than prompts, and sometimes those things would be totally insignificant to anyone else. On the other hand, the same piece of seeming rubbish that inspired one writer to a romance might inspire another to a horror story – especially something as evocative as a silver crucifix or an abandon pickup truck full of an anonymous person’s possessions. What makes something valuable is more often than not based on what its emotional attachments are. The value of a wedding ring, for instance, is much more valuable for what it represents than it is for itself. When a good
friend of mine got a divorce, I remember going with her to a jewelry store to sell her diamond engagement ring simply because it no longer represented what it had when she wore it for love. In fact, it now evoked almost the opposite feelings in her.

My good friend, Kay Jaybee often tells people that she can write about anything, that any object can be an inspiration. It’s true. But some things capture our imagination more than others and when that happens, it’s time to hang on to our writer’s caps and enjoy the ride.