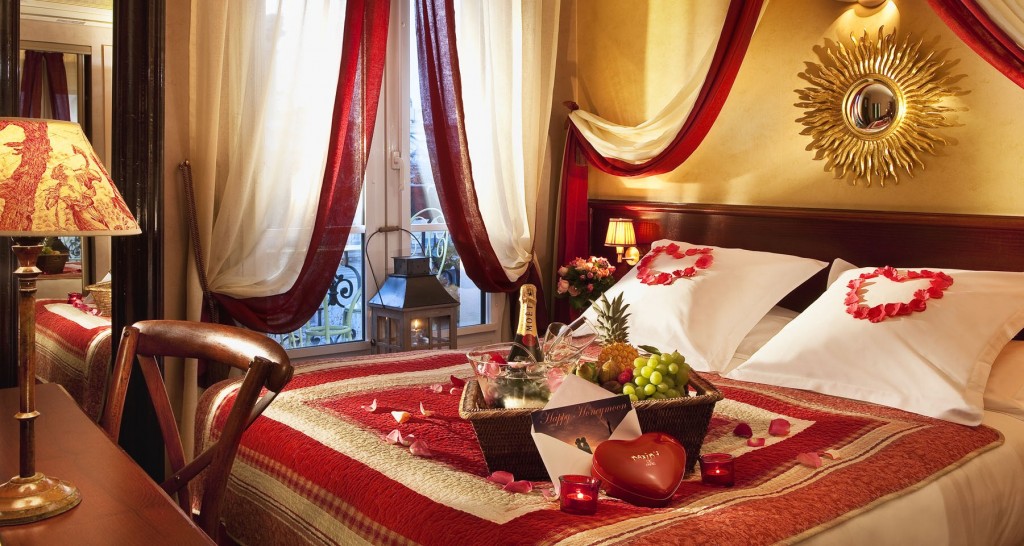 There’s something deeply romantic about staying in a hotel. If you have the money, it’s a chance to surround yourself in

five-star luxury, with beautifully decorated rooms, access to gyms and spa facilities, 24-hour room service and staff on hand to attend to your every need. TripAdvisor hands out ‘Most Romantic Hotel’ Awards each year, with the winners offering such things as champagne and chocolates to guests on arrival as part of the package, and providing a cosy little bolthole from the stresses of everyday life. Even if your budget runs to nothing more exciting than a travel lodge just off the M4, you’ll still get a break from chores like cooking breakfast and making your own bed – and for some that’s the definition of romance.

For many people, though, a hotel stay offers the chance to live out any number of romantic and sexual fantasies. Towns like Brighton built their reputation on being a destination for ‘dirty weekends’, where couples could get away from their families, friends or even their spouse and indulge in all manner of naughtiness. One piece of advice often given to those wanting to spice up their sex lives is to book into a hotel under false names, or even to pretend to pick each other up in the bar before going upstairs for some hot between-the-sheets action. It appeals to the concept of hotels as places where everything is transient, full of people you’ll never see again and who have no idea of what you might be getting up to behind closed doors. And with reports of guest accidentally leaving saucy underwear and exotic sex toys behind when they check out, it’s a fair bet the couple in the next room to yours are letting their desires run wild. (The moral here, of course, is to check under the bed and behind the radiators before you hand your keys back…)

When I started plotting His Secret Boss, I was looking to set the book in Wales. I needed a business that was failing and the idea came to me to use a hotel as the backdrop, because if you’re part of the management so much rides on giving guests the best possible experience. Like the rest of the United Kingdom, Wales has some spectacular coastal scenery and beautiful seaside towns. Aberpentre, the fictional location where hotel chain CEO Claudia Anthony pitches up, isn’t one of those towns, with a high street that mostly consists of charity shops and a general air of neglect. The Anthony Hotel is equally rundown, with a lift that’s in desperate need of an overhaul, as Claudia and the hotel’s manager, Rhodri, discover to their cost in this extract:

The lift arrived. We got in, and Rhodri pressed the button for the top floor. For two and a half floors, we ascended

smoothly, then there was the sound of metal grinding against metal, and the car juddered to a halt.

‘What the …?’ Rhodri jabbed at buttons on the panel by the door, but nothing happened. He waited a moment, then tried again, with the same result. ‘Shit! It looks like we’re stuck.’ He sighed. ‘And I got the maintenance crew to look this thing over today as well.’

Rhodri pressed another button, which bore the image of a bell. ‘That’s the alarm. It should let the company that monitors the lift know there’s a problem. Unfortunately, this thing’s so old, it doesn’t have any form of communication system built into it, so I can’t speak to them directly.’

‘Hopefully Bayo and Dean will realise something’s wrong when the lift doesn’t arrive at the top floor. They might be able to do something.

‘True, but even if they open the outside door, we’re halfway between floors. I don’t think we’d be able to climb out, and I don’t want to risk trying it.’

‘So we’ve just got to wait until someone arrives to get us out? How long is that going to take?’ I’d never suffered from claustrophobia, but something about being trapped in this little metal box caused nausea to churn in my belly. Even Rhodri’s solid presence by my side didn’t seem to help. I shivered, and wiped suddenly clammy palms on my skirt.

‘Hey, Jane, it’s going to be OK.’ He put an arm around me and gave me a reassuring hug. Though his intention was clearly to try and soothe me, he only succeeded in making things worse. I hadn’t cried since the day of Dad’s funeral, and now all the tears I’d been bottling up came flooding out.

‘But it’s the middle of the night,’ I babbled into his shoulder, no longer sure what was really upsetting me. ‘Who’s going to come now?’

‘They have people on call 24 hours a day. If anything, they’ll be here quicker than they otherwise might. No traffic on

the roads, no other idiots making demands on their attention by deciding to use an unreliable, thousand-year-old lift at midnight …’

He held me tighter as my sobs turned into giggles at his exaggerated response to our predicament. At last, I pulled away from him and removed my glasses so I could wipe at my eyes. Rhodri dug into his pocket and found a handkerchief, which he passed to me.

‘I’m sorry.’ I clutched the hankie in my fist. ‘I don’t know what came over me. Maybe I’ve watched too many horror films where people get trapped in lifts and terrible things happen to them.’

‘So would now be the right time to tell you that we have a ghost here?’

‘Really?’ I thought I’d heard all the stories about the hotel, but this was news to me.

He shook his head. ‘No. But it’d be pretty cool if there was. Just imagine if the spirit of some old hotel porter walked the landings, shining his torch as he went. Or if the place was haunted by an Edwardian lady who threw herself from one of the balconies because she’d been jilted by the man she was about to marry …’ His voice had dropped to a whisper, and as I spoke, something touched the back of my neck.

I shrieked and jumped backwards. Then realised what I had felt were Rhodri’s fingers, moving in a spidery trail over my skin.

‘That wasn’t funny,’ I snapped, as Rhodri fought to stifle his laughter. ‘You have a morbid imagination, you know that?’

‘So you don’t want to swap ghost stories, then? Never mind, I’m sure we can find some other way of passing the time …’

In the dim glow of the emergency lighting, Rhodri’s eyes were dark with desire. An air of anticipation hung between us, just as it had last night, in the moment before he kissed me. What had I told myself about not getting involved with him? It would be too complicated, too fraught with danger. Yet, as he pulled me into his arms again, I made no effort to resist.

Our lips were inches apart. I closed my eyes in anticipation.

‘You have to admit, Claudia, it’ll be wonderful publicity for you …’

Fans of The Untwisted series, 50 shades of Grey and Sylvia Day’s Crossfire series will love His Secret Boss.

Claudia Anthony, the overachieving owner of a successful hotel chain, is recruited to take part in the reality TV show Secret CEO. Disguised as Jane Ennis, she takes on a job at The Anthony in Aberpentre, a Welsh seaside town that has seen better days. She finds herself working under young, headstrong Rhodri Wynn-Jones, who has no clue of her real identity. Soon, passion flares and although Claudia knows there are lines she can’t cross, she just can’t keep away.

Rhodri is falling in love with Jane – but what will happen if he learns he’s actually having an affair with his boss?