Hi KD and faithful followers of The Story Behind the Story.

My novel, Sarah’s Education, was about to be published by the Virgin imprint Black Lace when Random House purchased the parent company. I was now a Black Lace/Virgin/Random House author.

The editor of Black Lace, Adam Nevill, and I were batting the concept back and forth when the axe fell. Sarah’s Education was one of the last Black Lace novels to be published.

Some of you may know that I live with Felix Baron, author of Nexus novels like Sweet as Sin and (my favourite) The Persian Girl. Naturally I collapsed with the vapours. We were doomed!

Maxim Jakubowski began discussions with Felix about an offer the publishing house John Blake had made to him: a limited number of crime novels to be published under the Imprint MaxCrime. We pitched an outline and landed a contract. It was fun. Instead of counting sheep to get to sleep at night, I began a body count that included the injured and the dead. I believe the total was 17.

MaxCrime granted us a reprieve that lasted just long enough for our ex-editor Adam Nevill to invite us to join him in a new, digital-only Imprint from the publisher Harper-Collins. Felix and I fumbled at our keyboards, each eager to be the first to say “Yes.”

We were new to digital but we’d read that e-readers like novellas, so we decided we’d each do a petite novel for Mischief.

I had a short story to toss into The Swap and the PAAPS idea (not my favourite acronym ever, although possibly my favourite title) on file. Somewhere it had morphed into the story of film students making money shooting personal videos for select clients.

Adam and I batted PAAPS around some more, tossing Felix the occasional hard ball (Gee, there’s something I never thought I’d type) and it became the love story of Emily and Luke, two film students struggling through their final year of University and wondering, ‘What’s next?’

In this excerpt sweet li’l Emily has evolved into a barking Executive Producer for whom the bottom line is product and profit. Luke, up until recently a sensitive film director, has reluctantly helped secure a cougar for a future shoot and is now pressed into service when Emily orders him and Paul to haul ass down to the student demonstration. Marion, Luke’s ex-Friend-with-Benefits, has just phoned in an order to shoot a public fuck for public consumption.

Luke and Paul stopped at the edge of the crowd. The cacophony of voices, some amplified by megaphones in the classic call-and-response that invited the agitated students to chant in unison, was almost overwhelming.

A police whistle blew and a rowdy protester was captured by cops. The crowd roared its disapproval.

Luke raised the camera. ‘Marion was right about this. It’s wild.’ He shot the protester, who had gone limp, being dragged off to a police van. ‘Don’t get caught, man. I think fucking in a public place might be against the law.’

‘I’m not going be doing any Marion-fucking, my friend.’

‘Fuck. Emily doesn’t even look at the files anymore. She just tells everyone what she wants and expects them to hop to it. Goddam it!’

Luke made a split second decision. ‘OK. Here.’ He handed Paul the camera. ‘It’ll be fast and dirty. I’m gonna make a beeline for that sexy bitch and she sure as hell better have her panties off when I get there.’

Paul steadied the camera on his shoulder. ‘At least there’s a lot of press here.’

‘I’m more than ready. Stay close, dude. I’m gonna fuck her up the ass until she passes out from pleasure.’

‘Whoa! I’m right behind you! Rolling!’

Luke started through the crowd. His blood was boiling. Little Emily who couldn’t take more than a pinkie up her bum without crying like a Vestal fucking virgin had whored him out again. Without so much as a ‘would you mind, Luke?’

‘Sorry,’ he muttered as he trod on someone’s foot. ‘Man on a mission.’

The thought of sinking his dick into Marion’s eager asshole was so enticing he was practically running. Paul had better keep up because he sure as hell wasn’t slowing down.

She was easy to spot. Her hennaed head of riotous curls stood out even in a crowd as large and rowdy as this one. Just as she’d said, she was pressed up against the barricade, chanting along with the rest of the crowd. She’d be singing a different tune in a couple of minutes.

Marion didn’t so much as look to see who it was that suddenly grabbed her from behind. She just tilted her ass back, inviting ‘a stranger’ to do whatever he wanted.

He unzipped his pants and flipped up her full, short skirt, exposing her bare ass for a flash. Luke gripped his dick, dipped his knees and jammed his raging hard-on up her ass. No fuss, no muss.

Marion gasped. She froze, both hands gripping the barricade to keep her balance as her assailant rammed the full length of his rod inside her.

‘What the hell!’ Marion enunciated as best she could, given the circumstances. Obviously, she was doing her part to make sure their dialogue didn’t get lost in the roar of the crowd. ‘Who the fuck are you?’

‘None of your business.’ Luke, taking his cue from Marion, spoke as clearly as he could and as loudly as he dared. ‘What the fuck difference does it make, bitch? I’ve got what you want. Admit it.’

He pushed harder, jamming her up against the barricade and burying his dick another quarter inch inside her.

She knew who it was. He was sure of it. Luke’s memory was flooded with images of Marion and him fucking each other’s brains out. It’d been so easy. So goddam fucking easy. And so much fucking fun.

‘Diddle your clit if you want to come because I don’t give a fuck if you do or not.’

One of Marion’s hands dropped from the barricade. She wriggled it down between the barricade and her body and slid it under the hem of her skirt. She swayed a little.

Now that Luke was inside her both hands were free. He kept one on her shoulder and grabbed the railing of the barricade with the other.

‘What the hell?’ A shocked voice let him know they’d been spotted. No time to waste.

‘Hey!’ This voice came from the other side of the barricade. The cops would be on him in a moment. He didn’t care. If they tried to drag him off he’d drag her with him. They’d have to hose the two of them down to separate them now.

‘Fuck!’ The first spurt of come seemed to be sucked from his whole body, from his firmly planted feet to the top of his head.

Luke sunk his teeth into the back of her neck, like a mutt claiming its bitch. It was the only way he could keep from howling.

‘Po po,’ muttered a voice behind him. Right. Paul.

Here came the long arm of the law.

But it didn’t matter. Luke was done. He pulled out, zipped up and took off. He didn’t know if Paul was behind him or had kept his camera on Marion. He didn’t know and he didn’t care. At the moment, he didn’t even care if Marion was getting lost in the crowd or dragged off to the cop van. He was free and that’s all that really mattered.

* As of this writing Black Lace is back and Mischief is thriving. Madeline Moore eagerly anticipates a bidding war between Random House and Harper-Collins for her upcoming novel, Vanilla Valentine. She also eagerly awaits Santa Claus. Not necessarily in that order.

** For those who care, this essay (excerpt excepted) is written in Canadian English.

Coming soon to Amazon.com and Amazon.ca but if you need something to tide you over, you can buy Felix Baron’s petite novel Look At Me! at Amazon’s Kindle store. Just search for Mischief Erotica and scroll through the titles. The gang’s all here! 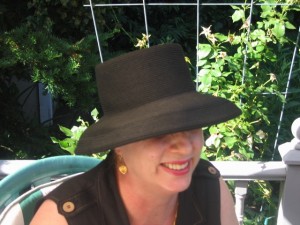 Visit my blog and blow my mind:

Or, you know, just leave a comment here! Thanks KD! You’re a gracious hostess, indeed.

Madeline Moore writes contemporary, paranormal and fantasy erotica. In another guise she has co-authored one crime novel and is a produced screenwriter. Madeline is Felix Baron’s fiancée!