My very dear friend and fabulous writer of nasty stories, the delicious Kay Jaybee is my guest today, and she’s definitely waxing lyrical. 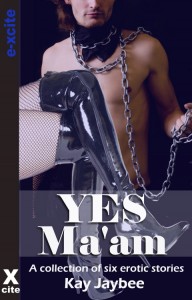 The question I’m most frequently asked as a writer of erotica is, ‘Where do you get your ideas from?’ The truth is that my creative processes can be sparked off by literally anything; overheard conversations, pictures, locations, even aromas. Another influence has to be music. Or to be more specific; lyrics. No matter how much I like or dislike the tune of a particular piece of music, it is the words that sell a song to me.

A fascination with listening intently to every single word of a song began back in my high school days. Many a fad swept my secondary school; one of which was to select hit songs that summed up the personality of each pupil, and ‘label’ them with that song. My shy persona and general wallflower status, led to me being forever associated with the song Goodie Two Shoes by Adam and the Ants, with particular reference to the line ‘Don’t drink, don’t smoke. What do you do?’ – (oh the irony!!! If they knew me now!!)

I just love the way lyrics can be woven together to tell a story. You only have to pay close attention to the words someone like Adele sings, to hear how beautifully they can be linked to tell short musical stories that we can all relate to.

I’m not sure whether Frank Sinatra would have approved of my borrowing of 5 words from My Way, but then again, as Mr Sinatra wasn’t exactly “Mr Shrinking Violet”, he might have loved my rhyming words of desperate eroticism!!

Most of them to do with you.

I should have shagged you on the floor.

In the kitchen; against a door.

I could have pressed you to a mirror,

And seen your sweat marks shine and shimmer…”

(You can read the rest of this poem by visiting my page on www.oystersandchocolate.com)

Getting more up to date; it was a line from the Snow Patrol song, You’re All I Have, that sowed the seeds of inspirations for the nature of the lead male character, Mark Parker, in the novel I’m currently working on (Fantasy 13). The lyric in question is ‘There is a darkness deep in you; a frightening magic I cling to…’ A sentence which hints at a compelling obsession, a willing coercion that (in this case) Mark weaves over his two female employees, (Bi lovers Anya and Clara). With a character such as Mark, who like many of my leading men and women is into dominance and control games, the possibilities for creating extreme storylines are endless…

So, what music do I play while writing my erotica; which let’s face it, tends to feature the rougher side of sex?

Despite not being a big fan of David Bowie, the first track is his classic ‘Let’s Dance.’ Just the rasping way he sings the introductory line, (Let’s dance put on your red shoes and dance the blues), is enough to make all the hairs on the back of my neck stand up. The lyrics are both romantic and sexy, and yet hopelessly so. You just know that whoever the song is being aimed at isn’t going to get the happy ending they yearn for. Such is the lot for so many of my poor characters! (Just check out my Fem Dom anthology Yes Ma’am to find some hot sexy encounters, but without the happy ever afters!)

The second song that always features on my playlists is Underwear by Britpop group Pulp. I’ve lost count of how many individual stories that song has kick started. Nearly everything Pulp’s lead singer, Jarvis Cocker, sings has a heady kinky edge to it, but Underwear is the cream on the cake for me. If you’ve never heard it- then you must find it on You Tube or treat yourself to the mega sexy album Different Class!  I promise that inspiration will soon follow.

My short story, Underwear (published within Sweet Confession by Cleis Press), was inspired by the title alone, and my entire serial Going Against Type (Oysters and Chocolate), was sparked by the concept the song presents. Why might someone feel compelled to keep meeting someone in secret for sex?  Are they really helpless to fight that compulsion, despite the wrestling they do with their conscience?

“Why don’t you close the door and shut the curtains
‘cos you’re not going anywhere.
He’s coming up the stairs and in a moment he’ll want to see your underwear.
You couldn’t stop it now. There’s no way to get out.
He’s standing far too near. How the hell did you get here.
Semi-naked in somebody else’s room.
I’d give my whole life to see it.
Just you stood there only in your underwear…”

Whenever I write an undressing scene, I always hear Pulp’s song in the back of my mind. The tension in both its words and delivery are just perfect.

If I’m really struggling to write, then I always turn to the music of 80’s pop group, Depeche Mode. More or less everything they performed is cut with undertones of submission and dominance. How could they not be with titles such as Master and Servant and Just Can’t Get Enough? My favourite of their works has to be Personal Jesus. The catch line, ‘Reach out and touch me’ was running through my head as I created Jess Saunders, the lead character and unwitting new sub, from my novel The Perfect Submissive. Bless her; no matter how much Jess pleads to be touched, she just has to wait until everyone else has had their fun first, (and even then she is sometimes left wanting),

So, do you see a pattern building in my song choices? Need more clues? Other tracks on my erotica writing playlist include Love is a Stranger by The Eurythmics, Human by The Killers, Big Mistake by Natalie Imbruglia, Everything She Wants, by Tatu, I Want Your Love by Transvision Vamp…and so on…They are compulsion songs. All about power, control, and simmering sexual tension; and if you have never read any of my work, then just a quick listen to that lot would give you a big clue as to what you can expect!! 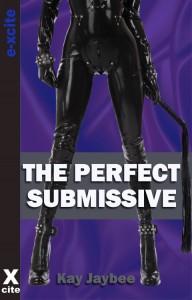 Jess, her eyes wide, her throat drier than ever, watched as Lee ran the brush’s soft bristles between his fingers. Kneeling before Jess, he placed the tip of the paintbrush on the very end of her right nipple. Gasping with shock at the sensitivity of the touch, Jess began to shiver against the sweeping strokes Lee focused on her breast.

‘I must congratulate you, Master Philips.’ Mrs Peters spoke with approval. ‘You have an excellent technique there, arousing, and stimulating, without being quite enough to make your subject come.’

Jess groaned. Why wouldn’t they let her come? As the deliciously torturous brush moved onto her left tit, tears of desire and frustration gathered at the corner of her eyes. She knew she was minutes away from begging. Begging to be fucked, begging to be allowed to come; begging for a warm mouth to come to her pussy, her chest, her mouth.

Her quivers turned to shakes as her stomach knotted with the build up of a fast approaching climax.

A gesture from Laura and Lee dropped the brush, causing tears of desperation to course down Jess’s cheeks. ‘Now, Miss Sanders, you have to learn to pace yourself. This is as much for our enjoyment as yours, and we are not ready to let you come yet.’

Blinking in disbelief at her superior’s words, Jess felt the tears dry against her face, as once again the brush was employed by Lee, this time along her tethered arms, her unsteady legs and her taut stomach. Concentrating hard on not pleading for more direct attention, Jess tried to ignore the growing ache between her legs, and the increasingly obvious presence of Lee’s erection.

Jess’s persistent moans turned to helpless whimpers as Mrs Peters finally broke the tension, ‘You may remove your clothes, Lee.’

The young man moved with uncaring speed and Jess gulped as she saw the neatly circumcised penis that was pointing at her hungrily, slide into the waiting rubber.

Ordered to sit up straight, Jess obeyed as the barman gratefully sank his length into Jess’s slick snatch. Their mutual sighs of relief made Mrs Peters issue a sharp sneering laugh, ‘So young and so desperate.’

Thanks Kay! As always, you are amazing. So glad you stopped by!