Ever since I began my journey as a writer seven years ago, one factor has repeatedly struck me- and to be honest, it wasn’t one I was expecting- everyone is so friendly. 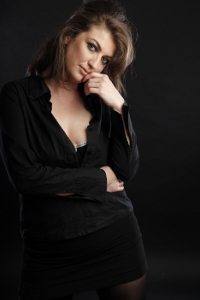 As an incredibly tiny fish in a huge pond back in 2005, and a small fish in an even larger pond here in 2013, it never ceases to amaze me that the very people I’m in direct competition with are the very ones who lend a supporting hand when required, and advertise my work alongside their own.

I hadn’t thought there would be open hostility out there in erotica world or anything, but as this is an extremely competitive market, I simply hadn’t imagined how helpful and kind my fellow authors would be. And of course, it isn’t just fellow authors that are ready and willing to extend the hand of friendship.

The Sh Women’s Store in London has welcomed myself, and my friends, to their shop many times to read our work to their lovely customers. Lovehoney have supported me with blogs, and countless kind reviewers have boosted my confidence (more than they’ve robbed it!), and followers on Facebook and Twitter, who I have never even met, often send supportive messages, share my posts, and promote my events.

And then there are the readers themselves! Bless every single one of you. Without you, myself and my colleagues are nothing!! I have been particularly lucky lately, with some very kind fan mail, and find myself in the strange position of having been asked by more than one reader to write faster, as they’ve read everything I’ve written, and want more!! Now that’s the sort of compliment that keeps us writer’s getting up in the morning!

Naughty K D gets a spanking from Kay Jaybee

Before you think that perhaps I’m drowning in a vat of sentiment, of course there have been the odd hitches along the way. I’ve had my share of followers who are just slightly too keen, and give me a little bit too much detail about how they’ve enjoyed my work!! And sadly there are still those readers that can’t separate the material that I invent from real life. It never ceases to amaze me how surprised these people are when I have to break it to them that, even though I have invented many a Fem Dom character, I am not into that way of life at all, and the chances of them finding me ordering someone to hang from a chandelier in their knickers and thigh high boots, while I brandish a whip and a determined expression are 1 in several billion!!! 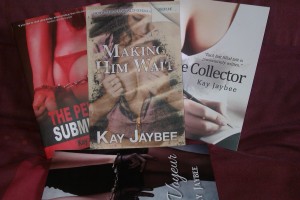 I’ll leave you now, and head off to write The Retreat (Part Two of The Perfect Submissive trilogy), as quickly as I can! Promise!!

Thanks again KD for inviting me over for a chat!!

You can find details of Kay’s work at www.kayjaybe.me.uk 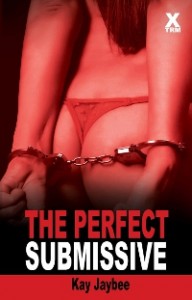 Extract from The Perfect Submissive

…Jess was sat at her desk, a half eaten sandwich in one hand; the fingers of her other hand dancing over the computer keyboard. Laura watched her through the office window for a few moments before confidently stepping into the room, interrupting the clerk without hesitation. ‘Mr Davies informs me he has not yet had time to complete your preliminary tour of the hotel.’

Understanding precisely where the manageress intended to take her, Jess spoke carefully, ‘I’ve seen most of it, but not all.’

Without confirming the clerk’s suspicions, Laura said, ‘I have a few moments, so if you’d like to walk this way I’ll complete that area of your training.’ She pointed towards the office door, ‘You are bound to be asked for directions around the place by our guests and it doesn’t look very professional if a member of staff gets lost herself, wouldn’t you agree?’

Although she’d now worked at the Fables for just over a week, Jess still hadn’t looked her boss in the eye once, a fact that sent a buzz of conviction through Mrs Peters; her initial instincts about the girl had been correct.

‘Are you happy here so far, Miss Sanders?’

‘Yes, Mrs Peters. Thank you.’ Jess muttered her response, almost managing to glance directly at her superior, but falling short at her shoulders. Laura’s heartbeat increased in response to the girl’s natural deference. Jess Sanders was just so perfect for what she had in mind.

As they walked towards the staff lift Laura attempted to improve the flow of conversation, ‘And I don’t think you have yet been introduced to all the other members of staff?’

‘Not yet, no.’ Again Jess spoke cautiously, and Laura knew from the expression on her face that she was both fearful and curious about meeting anyone who kept their business arrangements entirely to the Fables upper storey.

‘We are one member of staff down at the moment; one of my assistants has left us for pastures new. I’m searching for a replacement. Master Lee Philips, who works in the bar downstairs, helps me out as and when required, but it’s not an ideal arrangement. He has many other duties, and besides, the fifth floor guests frequently prefer the female touch.’

Following the clerk into the lift it was obvious that no small talk was going to come from her, so Laura calmly kept up her commentary. ‘My associate, Miss Sarah, should be on the premises by 10.00 each morning, unless she has had a complete night session, in which case she is not expected until 2.00 p.m. As I’ve said, Master Philips comes and goes, depending on our requirements and his bar and reception work. Miss Sarah has her first session of the day in a few moments, if we are lucky we should just catch the show.’

Visibly shrinking back, Jess noticed how Mrs Peters walked a little taller now they’d reached her domain. Her face was more set, her back straighter, and somehow she appeared even more intimidating than before. Pushing her hands into the deep pockets of her clinging knee-length black skirt, Jess hid the growing sheen of perspiration on her palms, while trying to ignore the fearful beat of her pulse.

Crossing the threshold of the room, into which she was being firmly steered by the elbow, felt like entering another world to Jess, or rather, another time. Manoeuvred towards a plush red velvet chaise longue, her eyes darting here and there, the clerk was pointedly sat down.

Trying to ignore the light but persistent pressure of Mrs Peters cool hand against her wrist, Jess took in the reproduction William Morris wallpaper, the heavy dark-wood chest of drawers, the floor to ceiling bookshelves, and the faded brown leather wing-backed armchair. Centre stage, only a few metres from where they sat, was a huge writing desk. Its top was inlaid with a square of leather, a portion of which was covered with blotting paper, an accompanying ink well, pots of ink, and nibbed pens.

Jess was reminded of a museum she’d once visited as a child, where rooms from a variety of different houses had been re-created from a number of historical periods. This room had Victorian study written all over it.

The silence was beginning to get to her as she waited, perched rather than sat, on the unyielding seat. A faint voice of hope at the back of her head kept telling her that all this had to be some sort of practical joke, but one glance at Mrs Peters made Jess reconsider. Her eyes kept drifting towards the study door. Whatever she had been brought here to witness surely couldn’t begin until someone came in. Twenty seconds later, each one ticked off by the hammer of Jess’s heart beating, the door swung back with a confident push.

‘Ah, Miss Sarah,’ Laura rose from her seat, a stern glare at Jess telling her not to move. ‘I hope you don’t mind, but Fables has a new member of staff, and I thought it would be a good idea to let her observe one of our sessions.’

Miss Sarah, her face powdered to an ultra-pale complexion, her curling hair pinned up in the style of a Victorian lady, her exquisite outfit historically accurate down to the small white buttons that fastened her stylish black boots, curtsied at once to her superior, ‘Of course, Mrs Peters.’

The stunningly slim woman glanced briefly at Jess, her grey gaze only lingering long enough to acknowledge the stranger, without taking in what she looked like or who she might be. Miss Sarah’s indifference, dismissing the office clerk as an unimportant factor in the room, made Jess feel smaller and more anxious than ever.

The agonising lull continued and Jess’s imagination began to run riot as Miss Sarah sat at the desk in preparation for her client’s arrival. Images of pock-skinned overweight men, panting loudly as they fucked the employees of the fifth floor against the furniture made Jess’s stomach churn, but there was no way out. With a quiet determination that Mrs Peters would have been surprised to know Jess possessed, she thought, if the other members of staff here have survived this part of the tour, then so can I.

As Mrs Peters returned to both the chaise longue and her application of gentle restraint against the clerk’s arm, Jess’s body stiffened. Someone was knocking on the door. Not daring to face her employer, Jess focused on the figure that, after being granted permission to enter, walked meekly into the study.

If he hadn’t had his neck bent, his face to the floor with respect for Miss Sarah, who greeted him with a sharp ‘Good Morning’, Jess judged he would have been quite tall. And he was young; not the sweaty, aged bank manager Jess had conjured up in her head, but a man in his late 20s or early 30s, with a shaven face, short spiked ginger hair, and well built limbs. He was dressed as a servant, perhaps a stable hand. Jess was automatically reminded of Lady Chatterley’s Lover. Gulping against her dehydrated throat, unwilling to see the sex that she was sure was about to follow, the clerk dropped her eyes, only to have her chin roughly jerked upwards by Mrs Peters, ‘No, child. You will observe. You will learn.’

A patina of panic gripped Jess. Every hair on the back of her neck stood to attention. Until that moment it had been unreal. She hadn’t let go of the hope that at any minute someone was going to turn around and say, ‘OK, Jess, it’s just a joke. We play it on all the new girls. Let’s grab a coffee.’ No one did though. No one was saying anything…

SHE IS: A fundraiser for Women’s Aid to Promote a Positive, Direct and Inspiring Female Voice → ← Eroticon 2013 — Writing, Bolgging, Creating and Aural Sex!

5 Responses to “Kay Jaybee Talks about the Erotica Family”