Justine Elyot Returns to Her Fantasy Roots with Her Latest Novel, Princess in Chains

Guesting at K D’s blog always feel like an event and I’m delighted to be here under her glamorous spotlight. Thanks, K D! 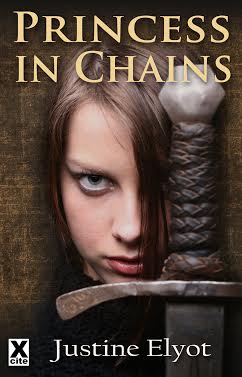 I’ve been writing and publishing erotica for five years now and I’ve tried my hand at a number of different styles and sub-genres. If I’m known for anything, it’s probably for contemporary erotica with a substantial dose of kink. But I enjoy reading and writing a diverse range of stories and all those kinky city women with their deliciously dominant lovers aren’t the only string to my bow.

I’ve written a speculative fiction novel (Under His Influence for Carina Press), a paranormal novel (Saxonhurst Secrets for Xcite) and an historical novel (Secrets And Lords for Mischief). And now I’m going back to my roots and experimenting with fantasy with Princess In Chains, the first in a trilogy for Xcite.

I say ‘going back to my roots’ because fantasy books were my absolute favourite as a child. We start with fairy tales, and I stuck with them, having a passion for the Narnia books that led to me borrowing them all from the library six times in a row. Quests, adventures, desperate escapes and rescues – these were rocket fuel to my developing imagination. And you will find all of that kind of thing in Princess In Chains.

You won’t find the controversial allegories of world faiths that you find in C S Lewis’s work though – my kingdoms have religions of their own, or they have no religions. Some of them are up to their ears in strange superstitions and some of them are solidly practical. Some are afraid of sex and some embrace sexuality in all its glorious forms and fluidity. None of them are exactly like a real place – at least, I hope not.

Asta was being borne away, aloft, by a trio of rough-looking men. They were some yardlings distant, but if she ran…

She put down her head and cannoned through the press, Taran hot at her heels, shouting imprecations behind her.

‘They have her,’ she explained, turning her head for a moment. ‘My…they have her.’

But the crowd was too thick and too unpredictable in its patterns of movement and she could not get close, no matter how she flailed and kicked. One man turned and grasped her arm, yelling at her for knocking down his small son. That was all the time Taran needed to catch up with her.

‘Mind your woman,’ growled the man, over Taran’s apologies. ‘If I were you I’d get her home and let her work out her passions on the washtub.’

‘Perhaps I will,’ said Taran. ‘Asta. Calm yourself. Are you saying that your mistress has been assaulted?’

‘They are taking her,’ said Leonore, waving in the direction of her last sighting.

‘Three men, wild-looking fellows…oh, what do they mean by taking her?’

‘Let’s follow their direction. Perhaps we can find them.’

They crossed the square, past the swinging corpse in the gibbet, through more crazed dancing, which had started up again regardless of the pother.

Their wanderings led them to a side alley, but it was quiet. If the abductors had passed that way, they had moved quickly. Or perhaps they were inside one of these shuttered buildings.

Leonore stopped abruptly before one of them, seeing again the strange conglomeration of triangles on the doors and walls.

‘One of the men – his arm was tattooed with this sign. At least, I think it was.’ She turned to Taran. ‘What does it mean?’

‘Valish Liberation,’ said Taran. ‘An organisation that seeks to overthrow Corvin from the throne.’

She tugged at the voluminous material of his sleeve.

‘Then that is a clue as to her whereabouts. He must be one of these freedom fighters. They have perhaps kidnapped her – for a ransom? Or…she is a political prisoner of some kind.’

‘Or they are just ruffians who wanted a woman.’

‘There were whores a-plenty out in that square. Why take a noblewoman, except for the purposes I have named?’

What’s happened to her?

You can find out by reading the book!

It’s available from all good retailers, including Sainsbury’s Online: http://www.sainsburysebooks.co.uk/book/Princess-In-Chains-Justine-Elyot/7710174

Regulating our Fantasies → ← Fulfilling the Contract is All Decked Out for Vegas!
© 2022 K D Grace
Site created and maintained by Writer Marketing Services