Janine Ashbless Had a Dream — Writing the Lovers’ Wheel Books 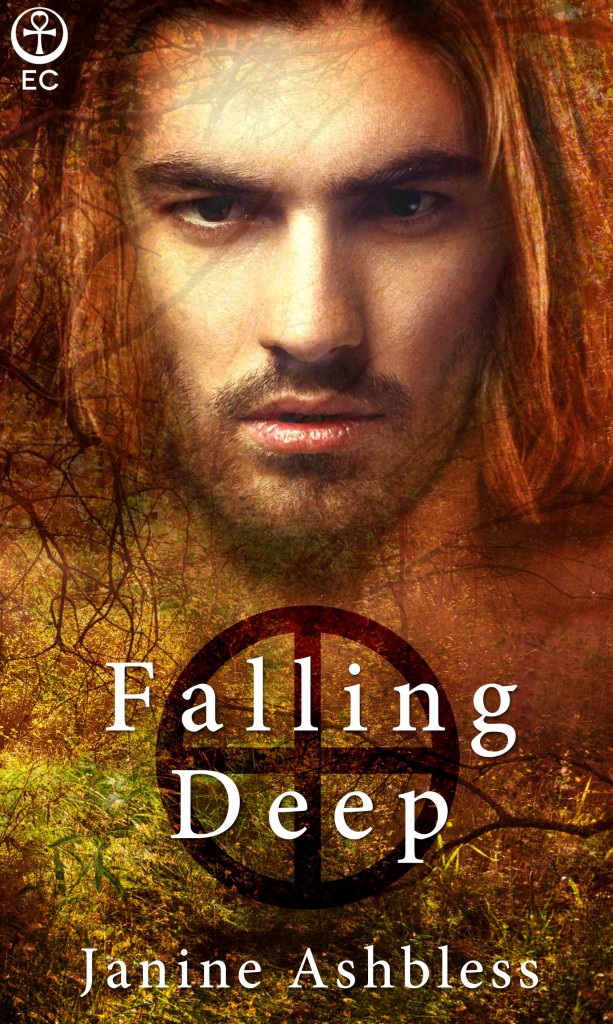 I’m so excited to welcome Janine Ashbless to mine on the release day of Falling Deep, Book 2 of her fabulous Lover’s Wheel Series. I love discovering what inspired people to write their stories, and Janine is going to tell us just that. Welcome, Janine!

I Had a Dream – writing the Lovers’ Wheel Books

One night some decades ago, probably before I was even a writer, I had a dream so real and so emotionally powerful that I’ve never forgotten it. I dreamed that I was standing at the gates of a big old house somewhere in the English countryside. The grounds were so overgrown that the gates were almost choked shut with brambles and weeds, but when I scrambled through and made my way up the drive I found that the house was still occupied despite being decayed. In fact it was a retirement home, with old people sitting around in wheelchairs, dozing and playing chess. Then I realized that these old men were the disguised King Arthur and his Knights of the Round Table, who had retreated here to await in secret the last call to battle when England would need their heroes again.

That was it. That’s all I dreamed.

Now I know roughly where the idea grew from. All my childhood I’d been reading stories from authors like Susan Cooper, Alan Garner, and Diana Wynne Jones, in which the nice cosy English countryside was a place where lurked gods and elves and Ancient Powers pretending to be human, just biding their time and perhaps waiting to be woken by plucky middle class school children on holiday. I LOVED those books! I wanted to write a wondrous story about a girl who discovers a hidden world of magical adventure, a girl who is marked for a special destiny, a girl whose choices decide the fate of the world.

Only I wanted to write the adult version, with really dirty sex and way more moral greyness.

So Lovers’ Wheel is about Liz, who goes to stay with her Great-aunt Moira at spooky old Enniswitrin House in Somerset, and finds that she’s been picked for the noble task of fucking each of the Twelve Months of the Year in turn, to keep the seasons turning. But being Chosen isn’t nearly as nice or as vanilla as she’s been lead to believe, especially as the Brothers start to lead her into the darker half of the year.

As for Arthur – yeah, he’s there too! Read Summer Seduction and Falling Deep to find out about him. And I promise that When Winter Comes and Joys of Spring will complete the cycle of the year in due course…

Book 2 of the Lovers’ Wheel series.

Liz is reeling with shock. She has just discovered that her Great-aunt Moira’s spooky old house is the last disguised remnant of mystical Avalon, and that Moira has been manipulating her into initiation as an immortal sorceress serving the old powers of nature.

Liz’s ordained role is to turn the Wheel of the Year through the seasons by having sex with each of the Twelve Months in turn. The Brothers of the Fall appear to be hot and handsome men, but they are far more daunting than their summer predecessors. Liz now faces three new avatars who are increasingly dominant and kinky. As the year turns inexorably toward the darkness, Liz must embrace the allure of total submission and give them complete control of her sexuality.

An Official Excerpt From: FALLING DEEP

She was on the train again. The one that had brought her to Somerset and to Raskelf village and to Enniswitrin House, all the way back in June. She recognized the blue seat covers of the Great Western Railway and the patronizing safety notice on the bulkhead of the carriage, and the cardboard coffee cups abandoned on the little tables. Only, this time it was dusk and she was completely alone. There were no bags on the overhead racks, and no other travelers in the seats. Outside, through the long windows, the world passed in a gray-green blur.

Looking down at herself, she saw the nineteen-fifties style dress she had worn for the Midsummer dance. But she remembered the black skirt and white blouse she’d really worn that morning, and she remembered the lion. Just not how she’d gotten there.

Yet it all seemed far away and unimportant.

I’m dreaming again. I wonder if he’ll turn up this time?

Rising to her feet, Liz walked down toward the end of the carriage, glancing into each seat as she passed. She could feel the vehicle swaying beneath her, and hear the click of the points as the wheels passed over. It sounded like hoofbeats. The muted roar of steel and wind outside made her think of a great crowd of people faintly heard at a distance. People shouting and banging things together. A clashing of metal.

Where have I heard that before? What does it remind me of?

There were no other passengers hiding behind the tall seat backs. Reaching the door, which failed to open automatically for her, Liz peered through the smoked glass. She should have been able to see a matching door at the entrance to the next carriage, and maybe a toilet cubicle. All she could make out were dark forms in rapid, jerky motion against a background nearly as dark. Flags, she thought. And horses. Those are horse heads. Like a whole crowd of riders are stampeding past. No, it’s a battle.

Liz jumped. Three rows away, exactly where she was sure there’d been no one at all, stood the black-clad figure of the man with the dark red hair that she’d seen in her last train dream. The one she’d been expecting. Mr. Foxy, she’d labeled him. He stood with arms folded and his butt—an exceptionally fine, tight ass as she remembered—propped against the side of a seat. Liz felt an instant rush of arousal and dread course through her body.

“Did you tell Moira, as you promised?” he asked again. There was an edge in his voice, and those blue eyes burned under angled brows.

“Yes.” She nodded rapidly, relieved to be able to report it. “He’s trying to wake up.” That had been the message she’d been charged with. Okay, so she’d only passed it on after weeks of delay, but at least she’d done it in the end. She felt somehow that she didn’t want to break a promise to this man.

“What did she say?” Unfurling his arms, he shifted until he was standing to block the aisle, one hand on a headrest, either side. She’d thought him a surfer dude or a climber, the first time she’d seen him, based on his body type and his untidy hair and his outdoor-sports manner of dress. His demeanor, though, was more military interrogation than civilian. His tense body loomed like an exclamation mark.

Squirming inside and trying hard to hide it, Liz cast her mind back to her recent argument with Moira. “Nothing really. She looked pretty upset though.” She looked awful. 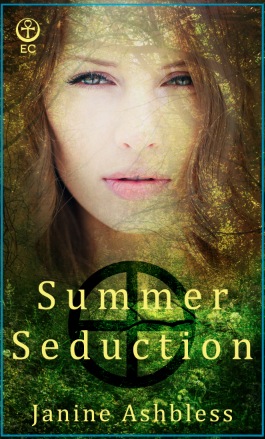 “She didn’t say anything! Except, uh…she asked how I knew. That’s all.” It wasn’t quite the whole truth. Their argument had certainly ratcheted up a notch after that. She swallowed hard, drawing up the old stories nibbling in the undercurrent of her mind. “If he’s King Arthur—the old guy sleeping upstairs—and she’s his sister, does that make her, like, Morgan le Fay? The witch?”

For a moment he held her gaze with his fierce eyes, and then he looked abruptly aside. She could see the muscles bunched in his jaw and the tension in his neck. Then he nodded curtly. “The Queen of Northgales.”

“Some queen. The old cow tricked me!” Liz’s complaint did not burn as hot as it had when she was awake. “She set me up with Shane and now she’s telling me I can’t stop or we’re all in big trouble. She says she wants me to save the world…or keep it going, anyway. Turning the year over.”

“Can you believe something that crazy? That the world depends on who I’m humping? Like I’ve got some kind of a…magic pussy?”

He shrugged, which riled her.

“What does that mean?”

“It means it’s nothing to do with me.”

“So what am I doing here, on this train?”

“This what?” It came out through clenched teeth.

“This train to Somerset. Intercity.”

His mouth pulled taut. “Perhaps you are between stations.”

“I fell down a bank. There was a lion in the garden, and it chased me.” She licked her lips. “That sounds much less likely than being on a train,” she admitted. “Maybe that bit was the dream.”

He arched one eyebrow, studying her. “Have you been initiated yet?”

“Then you cannot command the lion.”

“Then it will eat you. That is the way of the world, Liz Haven.”

He grimaced, and when he said, “As do I,” the words were thick with bitterness and regret. He’d seemed so dominant the last time they’d met, sexual charisma pouring from him like a wave that swept her feet from beneath her. But now that force was all pent up within him, his every muscle clenched.

“Are you in trouble?”

“Can I do anything to help?” she whispered. It was not entirely compassion that prompted her. Feelings in dreams were stronger, wilder and more imperative than waking thoughts. Unhampered by rational checks and balances, they had a momentum all their own, and her attraction to him was impossible to ignore.

“I don’t know,” he answered, capturing her in the sapphire net of his eyes once more. “Can you?”

She felt her heart jump as if he’d cracked a whip. But even he was surprised when she took a step forward and sank to her knees before him.

Why am I doing this? she wondered as she laid her hands on the coarse black cloth of his jeans. But she knew the answer already. It was pure lust, burning like a bright coal at the meeting point of her thighs. Her deepest urges were taking command.

He made a noise in his throat that has half surprise and half appreciation. The button fly under her questing fingers suddenly overlay a bulge that had not been there before, and Liz felt a rush of pleasure.

“I mean, this’ll help, won’t it?” she asked, made confident enough by his body’s response to lift her eyes and question him, even as her fingers plucked the stiff buttons.

“I… Liz, no,” he answered, his voice huskier even than before. There was a look on his face she had not seen before and it gave her great satisfaction to see his black brows hooked up like that. She’d taken him by surprise. He’d not anticipated that, and for a moment he was not the one in control. He looked almost afraid.

He wasn’t wearing underwear. His cock fell eagerly into her grasp from the V of his jeans, warm and silky, and he had to set his stance a fraction wider to stop his clothes sliding down those long hard thighs. She cradled his length in her palm, squeezing it encouragingly.

You look delicious. I want to eat you.

“Rubbish,” she told him firmly.

Falling Deep at Amazon US:

Her work has been described as: “Hardcore and literate” (Madeline Moore) and “Vivid and tempestuous and dangerous, and bursting with sacrifice, death and love.” (Portia Da Costa)

The Psychology of Dreams 101: Part Three → ← Erika Gardner On Sex And The Dragon in The Garden (@Erika_Gardner)
© 2022 K D Grace
Site created and maintained by Writer Marketing Services