Inspiration On the Hoof

The best walks, like the best writing, happen when I end up in places I never really expected to be places I didn’t even know were there. That’s exactly what happened this past Saturday. With plans to spend the afternoon in the British Museum, I tagged along with Raymond to Regent’s Park, where he does martial arts training every Saturday until early afternoon. We planned to grab a sandwich then catch the Sicily exhibit before it ended. I figured I might as well get some walking in, and Regent’s Park in July is a great place for a walk. 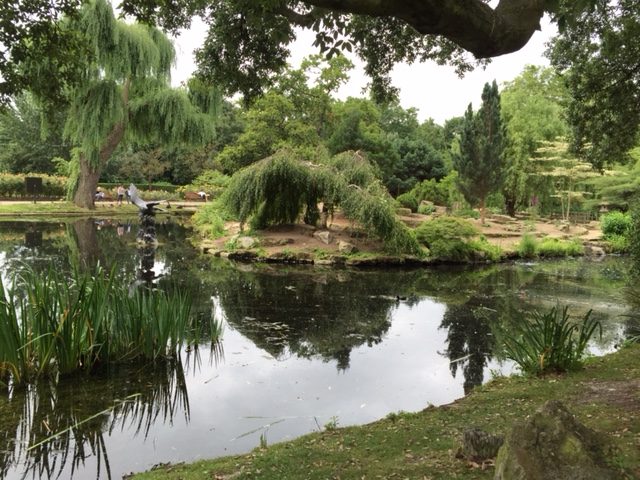 I sometimes forget how amazing London parks can be for long walks, addicted to the countryside as I am, but that means that when I go back to London, when I just follow my nose and let my feet take me there, I find myself totally enthralled.

There were babies everywhere, and mums showing them off. I got some really up close and personal shots of a lovely mallard family: 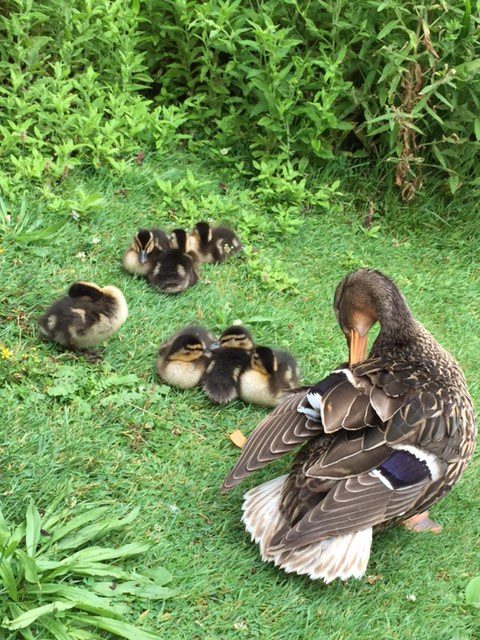 And a crèche of coots. 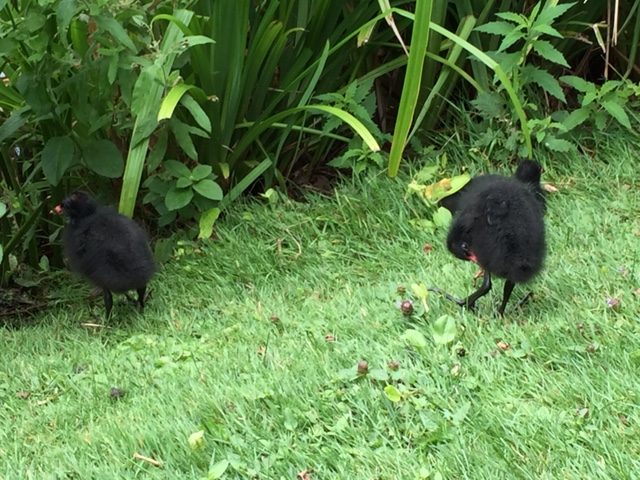 I couldn’t really tell family groups, and coots and moorhens, like humans, have asynchronous hatchings, so the chicks vary in size. 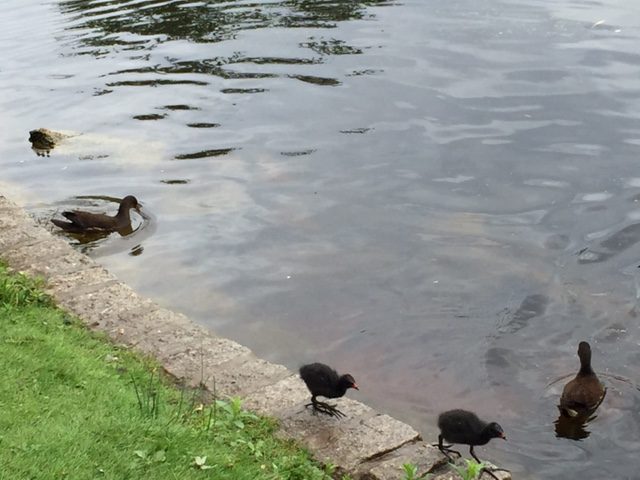 And of course there were plenty of human fledglings there as well. One delightful little girl, who looked to be maybe three or four, was prancing around the rose garden with her mum and dad sniffing roses as she went and actually commenting on the different scents or lack thereof. I didn’t take a piccie of her. Thought her parents might not appreciate that. 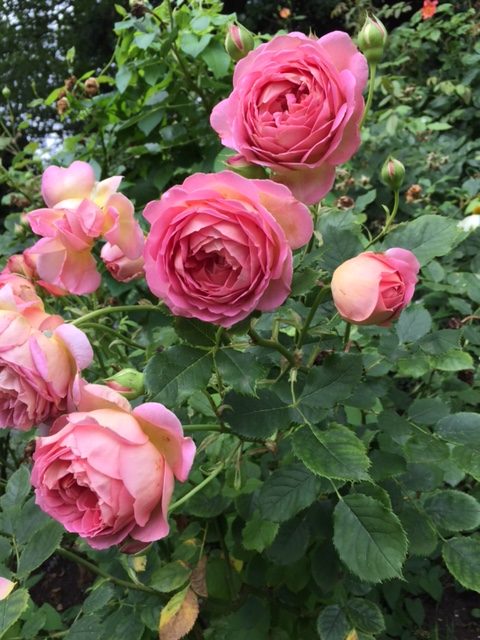 Besides the fledglings, there were also some gorgeous grown-ups there as well. I only got shots of the feathered kind though. Didn’t want to be stalky. 🙂 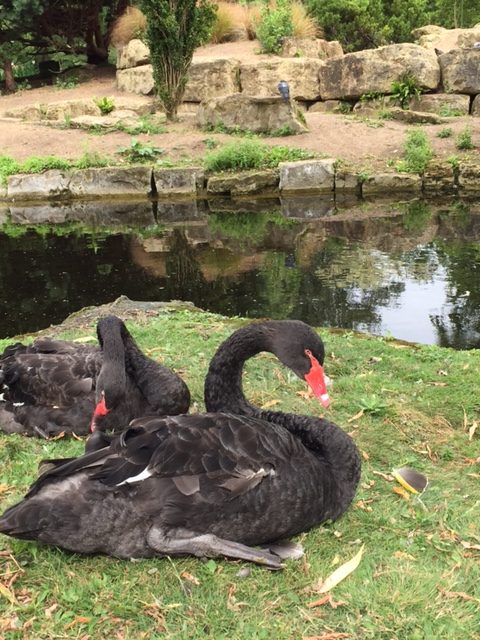 There were lovely little hide- holes and romantic waterfalls and lots of places to be inspired, as I let my feet take me deeper into the park 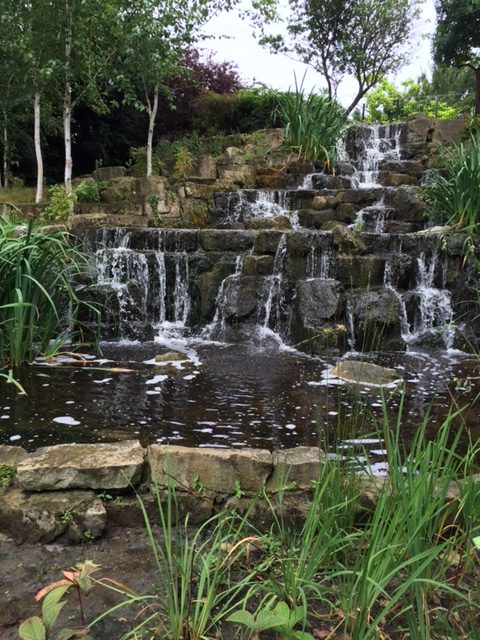 As often is the case, I ended up thinking about nothing at all really, just inhabiting the space and moving through it at an observer’s pace. I’ve long believed that you never really get to know the soul of a place unless you explore it with your soles. For every little place I did explore, there were at least a dozen I had to pass up. Next time! … and the time after that … 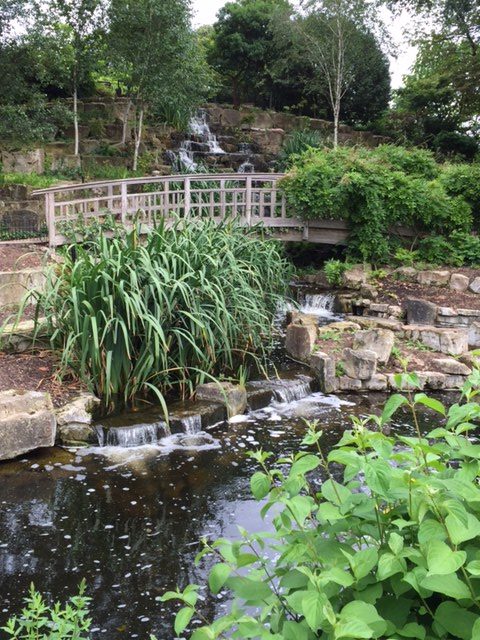 After awhile, I found that the hard exploring had left me in need of caffeine, so I got coffee with an extra shot (to keep me going) and thought I’d find a quiet place on the grass to sit and read. Didn’t happen. My coffee and I discovered the Regent’s Canal and the Jubilee Greenway! The canal is 13.8 kilometres long and is connected to the Grand Union Canal on one end and the River Thames on the other. I’m already envisioning more fabulous walks in my future. 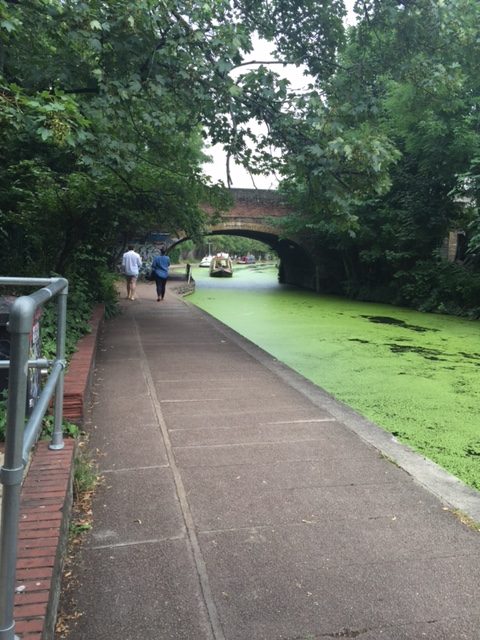 Apparently every summer when the weather heats up, there’s a bloom of green water plants. Couldn’t help but wonder if that’s why they called it the Greenway. But it did lend a very different ambience to the canal. 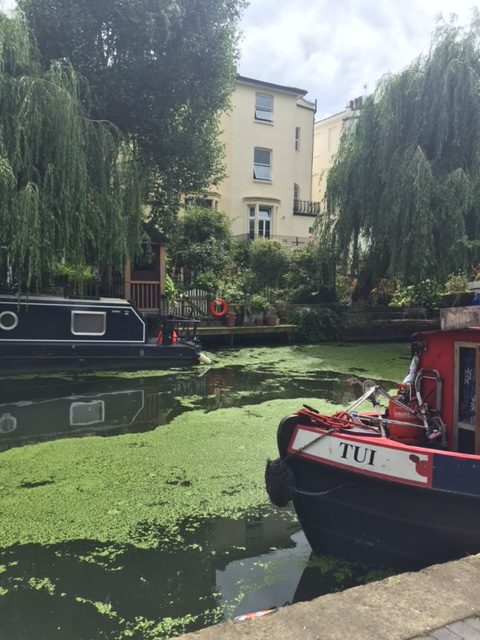 BTW, that house there opposite the Tui, that’s my dream London writer’s retreat. Also I think it just might be the inspiration for a place Magda Gardener might have in London. The woman has cottages and flats everywhere, you know. 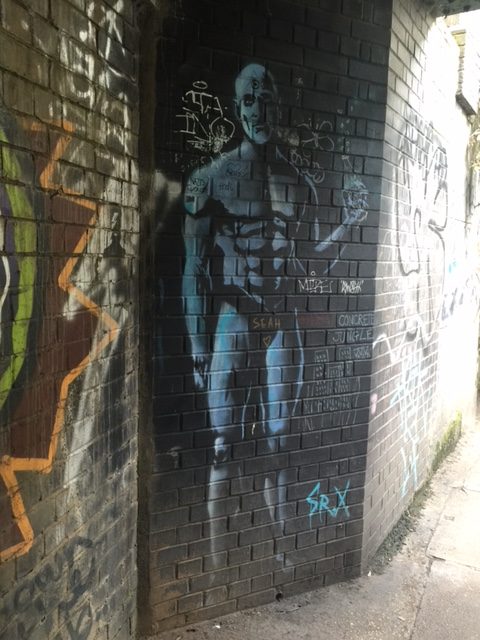 I discovered the Regents Canal is an art gallery of sorts, with Dr. Manhattan looking rather thoughtful while enjoying a soft drink. 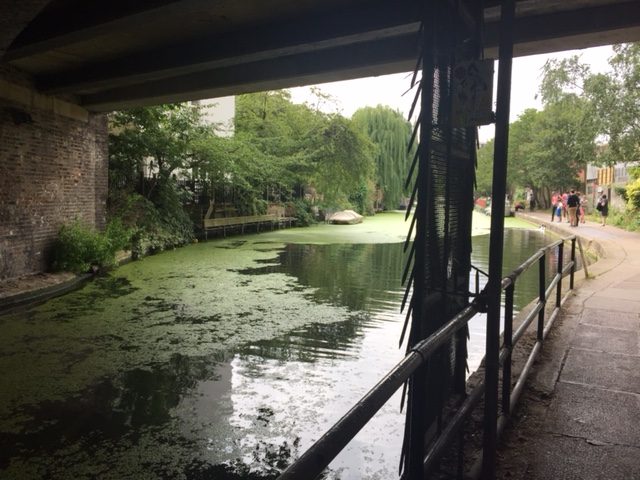 I headed toward Camden Locks reminding myself that my time was limited. But promising myself I’d be back. 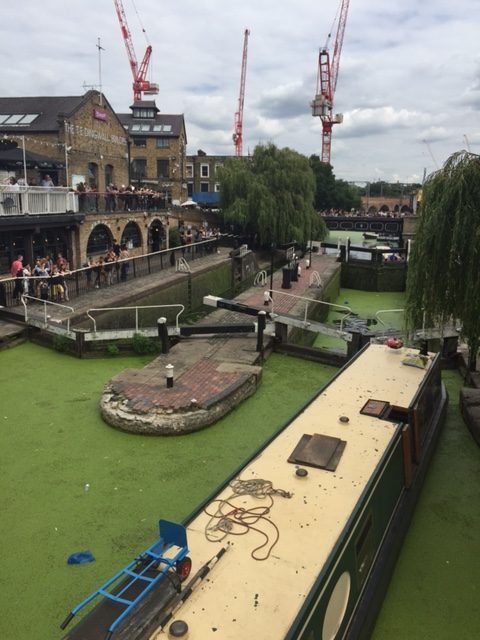 Sadly I was a bit late for the market. Next time! The place was fascinating, but a bit to crowded for this introvert — especially when she’s trying to walk, so I turned back toward the park.

Along the way I found this reminder that at one time the canal was for more than just fun, and it certainly was no fun for the horses! 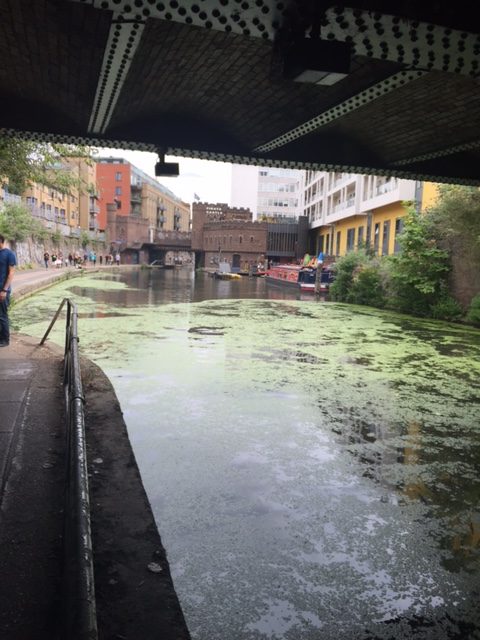 The best part of the canal on the Camden side of the park is there’s a wonderful mix of urban decay and pure romance. What more could a novelist ask of a good walk? 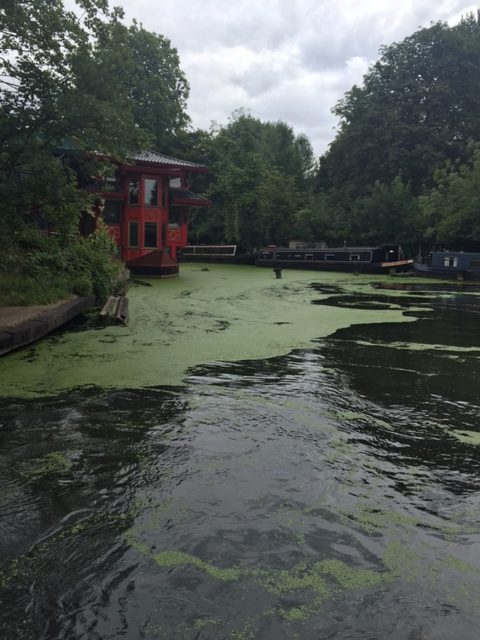 I reached the point where the canal turns under a bridge and leads back past the zoo. The Chinese restaurant was tempting, if for nothing else its fabulous location! 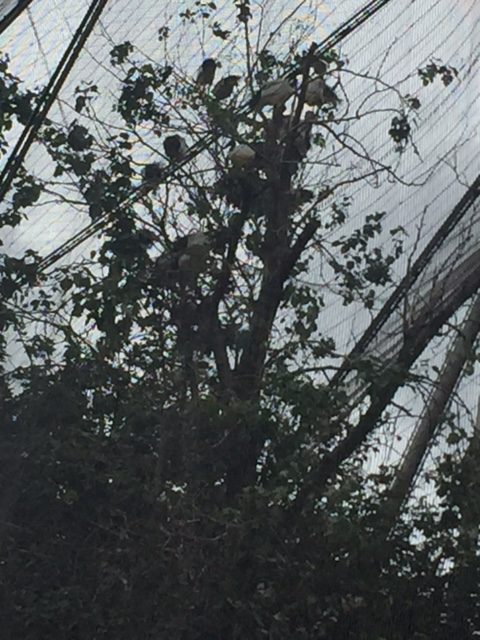 The canal meanders past the aviary of the zoo and while this isn’t my best photo, imagine my delight when I was greeted by a tree full of ibises … er ibi??? 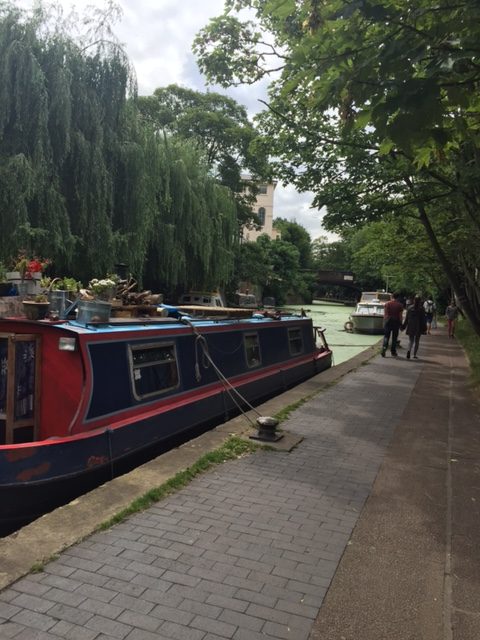 Sadly I didn’t get as many photos on the zoo side of the canal because I was trying to cover as much distance as I could before it was time to meet Raymond. As much as I enjoyed the Sicily exhibit at the British Museum — and I do highly recommend it, from an inspirational point of view, at least for me, the walk was the best bit of my day. It was only a little niggle of a walk that demands more – lots more, but it left me feeling refreshed and open to the Muse and her big stick. Sometimes walking a story actually becomes just walking to open myself to what’s beyond the blinders I often wear as a writer focused on my work. Whether I’m walking the story or whether I’m walking to be renewed, from an author’s point of view, from a human point of view, a good walk never disappoints.

A Picture Really IS Worth a Thousand Words → ← Shameless Selfie Sunday: Stop and Smell the … er … well … Everything!
© 2022 K D Grace
Site created and maintained by Writer Marketing Services