Inspiration and Hero-Worship in Bath

It’s been ages since I was last in Bath, and upon our return Wednesday afternoon I very quickly remembered why I love the place so much. For this visit to Bath, we

had Raymond’s sister, brother-in-law and niece with us. It was their first time.

We had a plan. Raymond would play tour guide while I wrote. I was feeling a bit panicked for having had a week with very little writing — lots of fun with the rels, but very little writing — so I promised I’d write at least part of the time then reward myself with a bit of Bath on the side.

So, being the well- behaved writer that I am, Wednesday afternoon, I bade everyone a fond farewell as they all headed  off to take the open-bus tour. Then I hung out in the hotel gardens and lounge drinking tea and writing like a crazy woman. I joined the happy gathering in the evening for fisherman’s pie and a pint of Abby Ale at Sam Weller’s Pub. I figured I’d earned it after finishing off 3K on the WIP for my day’s efforts. In fact I was pleased enough that I went on the tour of the Roman Baths with the rest of the gang the next morning. I love the Roman Baths. I don’t know how many times I’ve seen them, and every time I do they excite me and inspire me.  How amazing is it that something as simple as water can so powerfully draw for so many people to one tiny place for so many centuries?  It’s taken the water that now fills those ancient Roman baths ten thousand years from the time it fell as rainwater in the Mendip Hills and percolated down through the layers of rock to make its way back up to the hot springs below the baths. That’s some seriously vintage water! 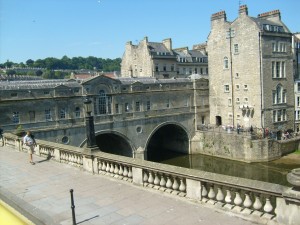 After a picnic lunch near the River Avon, complete with fresh cherries and French school children having a water fight, I said good-bye to my compadres and headed back to the Lansdown Grove Hotel for another close encounter with Stacie and Harris and another two thousand words written on The Exhibition. That evening I joined the crew in front of the Pump Room to listen to a little opera from the street buskers, which got us all in the mood for a nice Italian dinner later.

Friday, before we took the train home, we visited the Jane Austen Centre a little bit of a pilgrimage, for me, to honour one of the literary goddesses of all time and definitely one of my heroines.

The Jane Austen Centre is a quiet little place off Queen’s Square, not far from where Jane stayed when she was in Bath. What I remember most about the visit was hearing that Jane delighted in Bath when she went there as a young woman, and out of that delight came Northanger Abby. But later when she returned in her late twenties she found the place shallow and depressing, as evidenced in Persuasion. 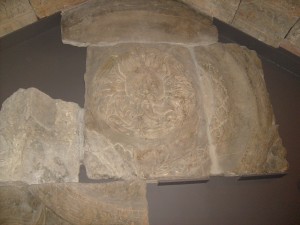 Though much of Bath looks like it might have looked in Jane’s day, things have changed considerably since then. Now it’s easy for me to find inspiration walking the streets between the honeyed sandstone buildings of Georgean Bath. It’s easy to be inspired painlessly and happily in the far-less stratified hodge-podge of tourists and locals scurrying about in the bright June sunlight. And, for me,  it’s impossible to walk where Jane Austen walked and not be awed by the stunning creative force that came from one small, seemingly powerless woman, whose novels didn’t even bare the name of their author until after her death.

KD Grace proudly puts her claim to authorship front and centre on everything she’s ever written, as does Grace Marshall. My name, my creativity, my essence. I wrote it! I claim it! I can’t imagine what it would be like to have been such a creative person as Jane Austen was in a time in which women had very little control over their own destinies.  I’m only saying that it’s good to be reminded that nothing comes without a price, and that price is 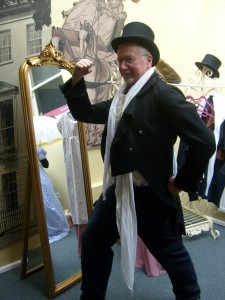 no less dear because I wasn’t the one who had to pay it. Having said that, I’m pretty sure every writer suffers for her art. I believe that whole-heartedly. Most of us suffer in ways that mean nothing to anyone but us, in ways that are quite often neurotic and unnecessary (at least I do).

I hope at this point, you’ll pardon my groupie-ism and hero-worship, but really, how could I go to Bath and not be at least a little bit star struck.

On a less serious note. Near the end of our tour at the Jane Austen Centre there was a place with regency costumes for visitors to try on and take piccies in. I have to say, Raymond makes a far more striking Darcy than I do Elizabeth.