Immoral Views — The Eyes Have It! 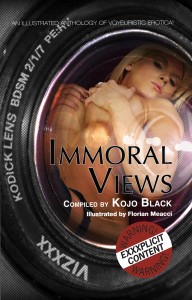 When it comes to sex, let’s face it, the eyes have it. Oh sure we have four other senses, and everyone uses certain senses more than others. No doubt sex is best when all senses are engaged. But the eyes have it. And certainly the eyes have it in the fabulous new Sweetmeats Press anthology, Immoral Views edited by KoJo Black.  And as if hot sexy stories for the eyes aren’t enough, Immoral Views takes the voyeuristic experience one giant leap further with the steamy illustrations of Florian Meacci.

I’ve always been a bit of a voyeur, so when KoJo asked me to write a story for this anthology, the voyeurism theme alone would have been enough to make me say yes. I’ve seen, fondled and drooled over the fabulous illustrations in KoJo’s sizzling collection, The Candy Box, so I was really keen on having my story illustrated. But when I found out I was going to be in between the covers (front and back, that is) with Kay Jaybee, Lucy Felthouse,  Rebecca Bond and Lexie Bay, I wasn’t entirely sure KoJo would be able to keep the pages of this super-heated anthology from bursting into flames before it hit the shelves.

In celebration of this hot new anthology, I’ve asked each of my fabulous co-authors from Immoral Views to tell us a little bit about their own versions of what I’ve affectionately come to call eye-sex, and I’ve included a blurb of each of their hot stories from Immoral Views. So tell me, my lovelies, just why do the eyes have it?

He was sat in a cafe looking at the pictures that covered the brick walls. I was sat at the opposite end of the room, my notebook open, and my pen in my hand. I was not writing however. Nor was I looking at the paintings. I just looked at him from behind the safety of the menu I held before me- a menu I was not reading.

He was fairly ordinary. Not over worked, no horrid ‘gym regular’ type muscles peeking out from the arms of his plain t-shirt. I judged from how he was sat that he wasn’t even very tall. But his eyes!! They were wide, blue, and somehow never ending. If those eyes could have talked they would have only said one word, ‘Sex.’

Those eyes gave me the most beautiful daydream. Undressing him slowly, never taking my gaze from his gaze, telling him what to do- making him keeping his eyes open at all times…ummmm- you get the idea….

The Circus by Kay Jaybee
The line is blurred between spectator and performer in a theatre of pleasure and pain!

So what turns me on visually? Ooh where do I start with this one. I have to admit that I adore checking out gorgeous sexy men. There’s nothing nicer to look at than a strong toned forearm gripping a steering wheel or a firm bum in a pair of jeans… or what about that sexy little line that disappears into a guy’s jeans. Mmmm, yep I’m more than happy to ogle a fit bloke any day.

But I also love that secret thrill when you see something you really shouldn’t have….. and you keep watching because you just can’t tear yourself away. I don’t think women are that different to men when it comes to the visual, deep down we all love a little bit of voyeurism every now and then. I bet if you stumbled across a kinky scene you’d stay and check it out….. I know I would! Izzy, from my story Inside Looking Out definitely would, and it leads her on a deliciously decadent trail from one side of the world to the other. So keep your eyes open and give yourself a treat every now and then – you never know where it will lead you!

Inside Looking Out by Lexie Bay
Adventurous Izzy spans two continents in a search for her perverted Prince Charming.

I was out walking on the Downs. It had just rained. Sane people were inside where it was dry.  I had just climbed a steep stairs up to the side of the hill and stopped to take pictures of the mist clearing off the hillsides when I heard heavy breathing behind me. I turned and nearly ran in to a very wet, very fit bloke carrying his mountain bike up the steps, biceps bulging, chest heaving, dark hair mussed. His face was hard with concentration and exertion. Then when he saw me, he smiled and everything about him became warmer, softer. He said something about how the weather had cleared and how nice it was to be outside. I’m sure I must have blushed as I mumbled my agreement. Then he mounted his bicycle and rode on, leaving me feeling sexy and feminine in spite of my drowned rat hair and sweaty t-shirt.

Alloted Views by K D Grace
A nosey gardener is treated to a raunchy ritual through her bedroom window.

There’s nothing quite like catching the attention of a stranger as you mooch about your business to give you a little flutter or giggle inside. As a city chick, the daily commute holds the most eye-fuck potential. Naturally you wanna be looking hawt, or the attention you attract could simply be down to the dark shadows beneath the eye, or the rogue globs of mascara that smatter the face. Never a good look. But whilst most people jump on and off the trains looking nowhere but their iphones, ebooks, or the daily rag, I sit back, relax and people watch like a pro. This, my friends, produces much eye-fuck fodder. Especially if a yummy tall, dark and handsome should so happen park his tushy on the seat opposite.

There is, however, danger in this sort of voyeurism. Yes, there have been moments when unintentional eye contact has been made with pure beasts and even though you know you need to look away, their ghastliness has you hooked. Just like beauty, ugliness is too fascinating too shy away from. But you must – look, look away or you might find yourself in an unexpected and utterly unavoidable mental strip-down-eye-fuck-all-out-bonkfest with Quasimodo’s twin! It’s okay though, because then the train stops, the doors open, and you never have to encounter Mr (or Mrs) No-Go again. Win!

Painted Pussycat by Rebecca Bond
An innocent student is welcomed into the Circle of Ink where tattoos, bondage and exhibitionism are all part of her initiation.

K D asked me to describe what turns me on visually, or something I saw that was really hot. Sadly, my answers wouldn’t have made for a very interesting blog post, so I decided to twist the question a little and let my imagination do the talking. That is, I’ve seen untold naughty things in my dreams and daydreams, and as an erotic writer, there are frequently things going on in my head that are pretty hot. And that’s definitely what was going on when I was writing my story, Caught in the Act. It took me a while to come up with the story idea, but once I did it pretty much ran away with itself. The more I wrote, the filthier it got… and it was filthy to begin with! The thought of a policeman becoming fascinated with dogging to the extent that he gets into the scene himself, well, needless to say I found the idea really interesting. There was some research involved, of course. On the Internet, I might add. There was no visiting of deserted car parks for me! So… coming back to answering K D’s question – I see things that are hot all the damn time, but they’re usually in my head!

Caught in the Act by Lucy Felthouse
A young policeman risks his reputation and his job for the adrenaline rush of sex alfresco!

Thanks, my voyeuristic Lovelies, for sharing the pleasures of the eyes and heating up my blog!

The e-Book versions are not illustrated (except with the pictures you provide with your nasty mind, of course)

4 Responses to “Immoral Views — The Eyes Have It!”