It’s always a pleasure to guest-blog for KD Grace and I’m grateful each time I get to contribute. I’m here again, this time to share some of my recent 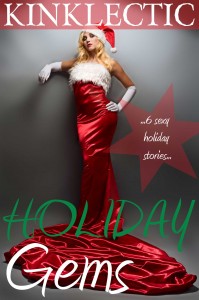 endeavors, both solo and with a group of eclectic writers.

I don’t know about you, but I love the Holiday season. I’m blessed with a wonderful family and we often prioritize the Holidays as a time of year to take time off from life and work, and typically converge upon a location somewhere along the West Coast. Coming from a large family (I’m one of five siblings, the oldest), it gets very festive. Along with our Irish and British heritage, ample amounts of liquor and spirits are imbibed and we are not shy about eating ourselves silly. We play games, see movies, stay up to the wee hours of the morning talking and genuinely enjoy one another’s company.

For this reason, amongst others, the Holiday season is pretty much a magical experience for me, surrounded by those who I love most on this lovely planet.

Last year, we enjoyed a sunny Christmas in San Diego and the year prior, a yummy Thanksgiving in Portland. A decade ago, we disappeared to Lake Tahoe for some snow-boarding and skiing, another year, we were on the Oregon Coast in a large house-share, enjoying the Pacific Ocean and the Pacific NW’s scenic beauty. Next year, we’re contemplating a Thanksgiving in San Francisco.

Contrary to what most believe, it is Mistress Klaus who runs the show at the North Pole. Not Santa Claus, but Mistress Klaus… Nonetheless, she still needs a partner. A man to call her own. A partner who can serve her in more ways than one… 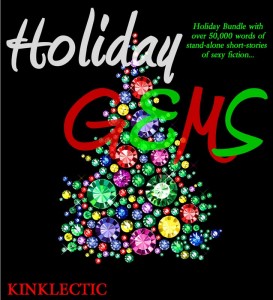 A sexy interlude between a student and Professor, then and now…

Wherein an inventor has found a way to use his latest marvel the same way most do – for sex. A hot ménage romance in a not-quite-steampunk fantasy Victorian setting.

The Winter Dream by Lydia Young

After her brush with death, Jolie Paget’s world tumbles into madness and dreams. On the longest night of winter, she must confront the chaos…and the man who haunts her sleep. But will she be able to emerge from it with her mind and heart in one piece?

Sally has nearly finished her PhD and is on vacation for the Holidays in sunny San Diego when she spies a tall, sexy man lounging across the pool. She’s recently dumped her boyfriend of three years and hasn’t had a ‘decent lay’ in as many. She makes a bold move, and picks up Rain, hoping for a one-night stand. Much to her surprise, Rain expects to be paid for his unique skills. Will Sally deny herself some much needed carnal pleasure or indulge in Rain’s expert, hand’s-on TLC and sensual care?

The collection will only be $0.99 through the Holidays (1/7/15) and is also eligible for the KU (KindleUnlimited) borrow program. It is available exclusively at Amazon.

My two short stories, Mistress Klaus and Santa’s Gift will be also be sold separately as stand-alones and are also exclusive to Amazon and the KU borrow program.

For fun, here are some snippets from my two stories:

This was really happening. And fast. This man was all eyes for me and the vodka tonics were hitting me hard. 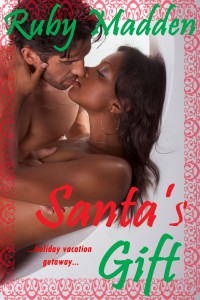 I was stunned that he’d noticed. This confirmed that he’d been watching me before I had come over to meet him. “Oh, just something silly. Girl stuff.”

“Girl stuff? You mean erotica? Or romance?” He teased.

I shook my head and wondered if there was any chance that I could feel any more awkward than I already was. I just knew that my expressive face revealed my nervousness.

“Awh,” he said, his amusement at my expense was somewhat endearing. His eyes danced with delight at my embarrassment. “Nothing to be ashamed of. Sex is the greatest pleasure in life.”

“For some,” I quipped quickly, regretting it as soon as I said it.

He tilted his face at me, and looked at me as if he knew exactly what I was referring to. “Sorry to hear it.”

Whatever awkwardness in what I’d just revealed must have been plain as day on my face because what he said next, blew my mind.

“Maybe I can change that?”

He was so bold. So direct.

It had already been a twelve hour day, but that wouldn’t stop her or her workaholic elf team from continuing to work. It was peak season and with
less than four days until the big day, it was all-hands-on-deck, twenty-four hours a day. Each elf working twelve hour shifts and then some more, if they chose to.

“Speaking of breaks, I think I need one too…” she sighed and made her way to the break-room to get some coffee. 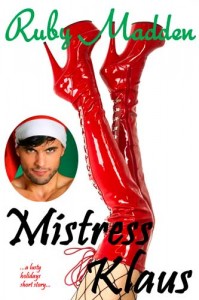 While she doctored the warm mug of liquid energy, adding a dash of nutmeg, she quickly got lost in her lusty thoughts. Rather than working, she wanted to read.

Read erotica, that is.

They gave her all sorts of naughty ideas…

Ones that she could play out with her very own submissive and naughty consort, Jasper.

Lastly but most importantly, Mistress Klaus has a gift for you!
http://bit.ly/1vMvuwa
The link expires Sunday so grab your copy soon.
Happy Holidays!

City Nights: One Night in Edinburgh by Charlotte Howard (@Shy_Tiger) → ← Tied to You by Bibi Paterson (@BibiPaterson)

One Response to “Holiday Gems: Six Sexy Stories by KINKLECTIC”