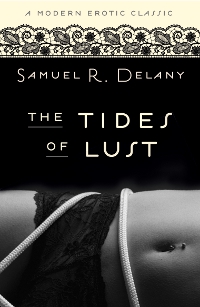 Available from:
Amazon US
Amazon UK
All Romance eBooks

The color of bell metal: Longer than a big man’s foot; thick as a small girl’s wrist. Veins made low relief like vines beneath the wrinkled hood. His fingers climbed the shaft, dropped to hair tight as wire, moved under the canvas flaps to gouge the sac, black as an over-ripe avocado: spilled his palm (it is a big hand); climbed the shaft again.

There is little light.

What’s here bars the shutters in gold. Water lisps and whispers outside. The cabin sways, rises. There is a wind out to sea, that means. That means here at port it is clear evening. The dog on the floor claws the planks.

The captain’s toes spread the footboard. His chin went back and his belly made black ridges. The long head rolled on the pillow, brass ring at his ear a-flash.

The hood slipped from the punctured helmet. The knuckles, like knots in weathered cable, flexed on him. The rhythm started with the boat’s sway. Increase: his hand and the boat syncopate. The doubled pace pulled his buttocks from the blanket. The rirn of his fist beat the tenderer rim ( one color with his palm). His breath got loud. It halted, and halted, and halted. Stop action film: a white orchid from bud to bloom.

He swung his feet over the edge, his shoulders hunched (dull as cannon shot); his dirty shirt was sleeveless. Buttons: copper.

His voice: maroons, purples, a nap between velvet and suede.

When the door cracked, he laughed.

Her hair was yellow, paler than the light. Her smock, torn at her neck, hung between her breasts. One dull aureole rose on the blue horizon. Her face moved with its laughter before she saw, “Captain, you . . . ?” saw, and smothered it, to have it break again. Blue eyes widened in the half dark. “What do you want?”

She stepped on to the rug. A copper anklet sloped beneath the knob of her ankle, crossed low on her calloused heel. (Uneven hem brushes smudged knees. ) A print sash bound her belly.

“Where is your brother?”

“In the wheelhouse, asleep.”

“With the men on the docks all coming by to stare? How many with their hands in their pockets?”

“None of them with what I got.” He leaned back.

His fingers tracked his stomach. “Come here. Tell me what’s for supper.”

“Your thoughts have gone as high as your gut, now?”

“How do you and the boy get chores done if you sleep and sun all the time?”

“But what is there to do in port?” She stepped across the rug, laughing.

He grabbed her wrist. She stumbled and he caught: “How many times!”

She pushed his chest. Her wrist turned under slippery fingers.

“Once already. Six more now.” He kneaded her inner thigh.

His hand went beneath the hem.

She shrieked and bit the sound off. What spilled after was a giggle.

“How many years have I had you two, now?” His forearm shifted like bunched blacksnakes. She tried to push his hand from under her skirt. Stopped trying.

She opened her lips and caressed his arm.

“How many years? Seven. Now, once for each year you’ve worked on my boat.” He looked down at himself.

She touched where he looked: she took it, slipping the loose skin from the head. When she fingered beneath the twice full bag, he arched his back.

“Pig. Sit on it. Little white pig . . .” Three calloused fingers were knuckle deep in her. She bent; her hair swept his face. He caught it in his yellow teeth, twisted his head. Kirsten grabbed at her hair, and made an ugly sound. His teeth opened on laughter; it and her hair spilled black lips mottled with cerise.

SAMUEL R DELANY, born 1942, grew up in New York City’s Harlem. His novels Babel-17 and The Einstein Intersection both won Nebula Awards from the Science Fiction Writers of America, as have his short fictions, Eye, and Gomorrah and Time Considered as a Helix of Semi-Precious Stones (which also took a Hugo Award during the World Science Fiction Convention at Heidelberg). His books include The Jewels of Aptor, The Fall of the Towers, Nova, Driftglass (short stories), Tales of Neveryon, Triton and Dhalgren, the million-selling odyssey of modern youth. With his wife, National Book Award-winning poetess Marilyn Hacker, he co-edited the speculative fiction quarterly Quark. He also wrote, directed and edited the half-hour film The Orchid. His essays in literary criticism are collected in The Jewel-Hinged Jaw (1977). In 1975 he was visiting Butler Chair Professor of English at the State University of New York at Buffalo. For the last half dozen years Delany and Hacker have lived between New York, San Fransisco and London. They have one daughter.