Many thanks to Kd for inviting me to her blog today to talk about The New Room, the novella length finale that wraps up The Perfect Submissive Trilogy. It’s time for Miss Jess Sanders to have one more erotically demanding challenge- but this time it’s in the name of love… 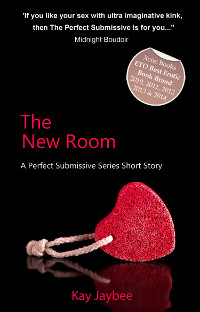 Of all the erotically centred characters I have created over the years, Miss Jess Sanders has to be one of my favourites. Despite her submissive status- or perhaps because of it- her bravery is unending. She has more strength and stamina within her than many of the Doms she encounters, and although she is merely a figment of my own imagination, I am really very proud of her determination never to fail- a determination she’ll have to call on once more in The New Room.

…With a shove of her bound hands against the small of her back, Jess was bent forward so that her feet remained flat upon the floor. Her belly and chest were laid across the throne’s cushion, while her forehead rested uncomfortably on the wooden seat next to it.

As Jess’ companion ordered her to close her eyes, a further wave of uncertainty added to the submissive’s anxiety. She didn’t recognise the voice. It didn’t belong to either Max or Lee. This was a stranger.

Even with the cloak hanging over her back, Jess’ flesh felt an oddly clammy chill of foreboding mingle with the cold. As her nipples buffed against the cording that ran around the edge of the throne’s satin cushion, the sole thought hammering in Jess’ head was, Who is this man?

The Fables had no new male member of staff that Jess was aware of. Although it was possible someone had been hired and no one had told her. Wishing she’d thought to ask Mrs Peters if she had permission to speak during the training session, but not wanting to risk her superior’s wrath by assuming she could, Jess clamped her jaw against the need to ask the owner of the fingers that were exploring the curve of her backside with growing confidence, who the hell he was.

Her neck was beginning to stiffen against the hard chair seat. Jess was just wishing the pressure of the cushion against her chest wasn’t so arousing when the anonymous palms abruptly stilled. All but for the thumbs – which continued to work in small sweeping circles, the simple move pushing Jess’ sex addicted body to silently plead for the man to flick up her cloak and thrust himself into her from behind. Now!

The sound of the door opening again made Jess’ breath catch in her throat as she lay over the chairs. Who else had joined them? Jess’ unspoken question was quickly answered, as the imperial voice of the Fables’ fifth floor manageress addressed the man, who was now kneading Jess’ butt cheeks as if they were mounds of dough.

‘I trust Miss Sanders has been obedient for you, Mr Grant?’

‘Oh yes, Mrs Peters.’ Mr Grant’s voice was husky and dripped as much with disbelief as it did lust.

‘Has the girl spoken, asked questions, or hesitated in her obedience to your requests in anyway? Even fractionally? ’

‘Not one word. Not so much as a pause. The girl is as well schooled as you told me she was.’ The tone of Mr Grant’s voice told Jess that he hadn’t expected her to be the submissive her boss had evidently boasted her to be.

‘I only employ the best, Mr Grant.’ Even though she couldn’t see her, the satisfaction in Mrs Peters’ voice warmed Jess a little against the cold. ‘I have to say I’m impressed with what you’ve built for us. This is precisely the grotto I had in mind. Would you like the tip for your services now, or would you like to be a spectator for a while and take your reward for a job well done afterwards?’

Mr Grant’s gulp was clearly audible as his hands rested over Jess’ hips. Instinct sent her butt up towards him.

Hoping that Mrs Peters hadn’t noticed the unauthorised move, Jess squeezed her eyes together tighter, willing her companion to take his reward now. She desperately wanted his cock inside her.

‘As much as I’d like to witness what you’ve planned, Mrs Peters, I have business elsewhere.’ Mr Grant’s voice was getting huskier, and Jess could hear how close he was to coming already. She doubted that he genuinely had other business. It was more likely that he simply wasn’t able to wait to experience the pliability of the submissive’s flesh. The edgy urgency in his voice was something Jess had heard from many a male hotel guest over the past eighteen months.

Mrs Peters nodded, ‘Then you may proceed…’

If you enjoyed that, and would like to know what happens next, you can buy The New Room from-

The New Room is best enjoyed if you have already read The Perfect Submissive Trilogy, which is available as either individual book (e-book or paperback) or in a box set (eBook only) from all good suppliers, including- 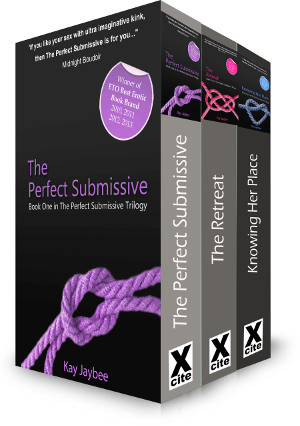 Thanks again for letting me come and visit today Kd! 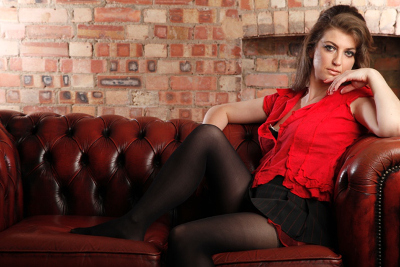 Kay Jaybee was nominated as the Best Erotica Writer of 2013 and 2014 by the ETO.