The Last Dragon: The Story Behind the Story by Dianna Hardy

Thank you so much, KD, for having me back on your blog 🙂 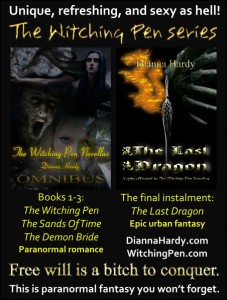 The Last Dragon is the long-awaited, final, sexy, epic urban fantasy instalment of The Witching Pen series. And before I can really talk about the story behind this book, I need to refer you back to The Witching Pen post on this blog that I did a year ago – https://kdgrace.co.uk/blog/dianna-hardy-shares-the-story-behind-the-witching-pen-novellas/

In some ways, since this book is still part of that world, that post says a lot. The huge difference with The Last Dragon is that it is urban fantasy in tone. The last three books (which were paranormal romance) concentrated on couples getting together; The Last Dragon explains what happens after they’ve all gotten together.

Now, behind the story… hmmm… even though I started off writing erotica back in December 2010, followed by paranormal romance, I always had it in my head to write an urban fantasy – I love the grit of that genre – and I never wanted to be a one-genre girl anyway. 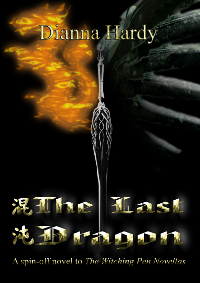 The Last Dragon provided me with the opportunity to venture into urban fantasy for the first time: there is huge plot throughout this series and it all comes to a head in this final book.

A reader asked me recently, what was the inspiration behind the story of this series – is it based on experience? Did I dream it and then write it? The answer, I suppose, is that it’s a mesh of many things that I have learned throughout my life. I grew up in a multi-cultural society in Macau, and dragons are big there with the Chinese influence. Later in life, I learned about what dragons meant in the Western world and within Pagan mythology. I wanted to write a story that brought everything together; that united the world; that was about a mergence of differences. This begins in book one, with the first example we have of dark and light merging (Karl and Elena), and the theme of unity and letting go of duality continues throughout all the books.

You’ll find many countries and places referred to in this series, from the hot desert in Nevada, to the cool lakes of Scotland, to the isolated mountains of Beijing, to the mysterious heart of the Amazon rainforest, to the urban life of London, and more. The vast world is really quite a small place, and no matter where we come from, we are all united by common goals: love, forgiveness, and the need to become ‘whole’.

At the very core, underneath the love and sex and action and humour, that is what this story is about.

Book one of the series, The Witching Pen, is free to download from most eBook retailers: http://www.diannahardy.com/the-witching-pen.html

For information about the entire series and where to purchase, please go here: http://www.diannahardy.com/the-witching-pen-novellas.html 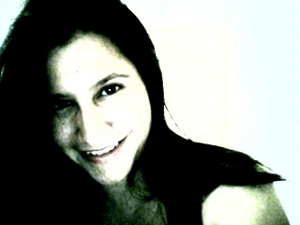 Author of The Witching Pen and the international bestselling Eye Of The Storm series.

Dianna combines a titillating mix of paranormal romance and urban fantasy into her writing to bring you stories that are action-packed, fast-paced and not short of heat, with the focus on both character development and the plot. She writes both full-length novels and short fiction. All further info can be found at diannahardy.com

Prologue to The Last Dragon

NOTE: this excerpt contains scenes of a sexual nature, and SPOILERS for the series up to this point as The Last Dragon is the final instalment. These books are not standalones.

(The first night after all dimensions bled into one.)

Lying in the crook of his arm, she trailed her fingers along the contours of his smooth, firm chest. Without hesitation, she leaned in a little and followed that trail with her mouth, her kisses making his skin pebble.

He stroked her arm in response and sighed with pleasure, and then turned his head to take her in with those blue eyes she’d fallen in love with ten years ago – maybe even before that.

“Yeah,” she nodded. “Just wanted to make sure you were.”

He smiled. “And this is your way of checking?”

“Is there another way you’d prefer?” she teased.
“No, this is good.”

Manoeuvring under the duvet, Elena threw one leg across his thighs and hauled herself up and astride him.

She leaned down and captured his lips with hers. “I love you.”

“Are you sure you want to sleep here tonight?”

He briefly looked around the room that was Gwain’s – had been Gwain’s – although none of them were ready to admit what had taken place just over twelve hours ago. “I’m not ready to go home after this morning. Even if it’s safe, I just … can’t.”

She nibbled his earlobe and he groaned, his hand finding its way to the curve of her bottom.

“Have you looked in the safe behind the bathroom mirror yet?”

Her nibbling continued down his neck.

She felt him smile against the top of her head. “I kind of figured. Are you hungry?”

She paused for a second, letting the brief hurt of his words slide her by, and then glanced up at him. “No. Well … yes, but that’s not why—”

Annoyed, she started to climb off him, but he pulled her back down and held her in place. “Elena, I love you,” he repeated, “and that means your demon too. If she needs to feed, it’s fine – it’s more than fine.”

“I want to make love to you because I want to feel close to you and because of everything that’s happened today – to feel safe and happy, if that’s even possible.” But she couldn’t deny that she was hungry, and her words rang hollow with the truth she kept hidden. It irritated her that she was so ruled by her demon’s needs. The succubus in her had been very prominent today, demanding her attention, and although the day’s events had been busy, she’d still found herself fighting with the fact that she craved sex – or rather, the energy that sex created. It wasn’t right that whilst in mourning – while everything was collapsing around them – she wanted to fuck for her own gratification.

She looked away from Karl, aware that he could read her like a book.

Pinning her on top of him, he reached forward and slipped two fingers under where she sat, finding her centre.

She moaned with delight, despite herself.

“I want you to make love to me,” he said, his voice coarse with desire. “Please.”

It was music to her ears and a hot river to the rest of her body. But still she fought it. “How can you stand it? The way I look when I… What I do to you when I…” She couldn’t finish either sentence, partly because she hated thinking about it, and partly because he’d increased his pace, making her wetter and using her reaction to add fuel to her fire.

His erection had grown fully under her, expressing his own need. “Unless you’ve had a succubus make love to you, you don’t get to ask me that.” His fingers entered her, and she gasped, but had no time to enjoy the sensation because he moved her up and repositioned himself beneath her before bringing her back down.

His cock replaced his hand, both of them fighting for breath as she fell on him; drew him in; sucked him into her…

And still she denied herself – denied her demon. “That moment when I come … it feels like I use you.” Repulsion sat heavy in her belly at those words, but it was her mother’s earlier confession that played out in her mind, feeding the self-loathing she tried so hard to master: They have a way of making things … pleasurable.

She full well knew what her mother had endured while enslaved in the Shanka world, because she knew exactly what her succubus was capable of. “All I feel is what’s inside – you inside me; the demon inside me. At that moment when we’re both on the brink, I lose control and she takes over – she’s the one that has you at that point. I’m scared she’ll kill you – I’ll kill you – all over again.”

“Fuck, Elena…” His head was stretched back, eyes closed in bliss. Had he heard a word she’d said? Probably not, because she’d been riding him harder and harder as she’d spoken, bringing to the surface what she so needed.

His soft, angel-glow began to emanate from his body, and that glow had her reeling in satisfaction, grinding faster … deeper…

But he surprised her once more, as he so often did with his love for her. He had heard her. He looked up, bemused, a twinkling in his eye, “You know, some men like it that way.”

She landed a soft slap on his chest and couldn’t help but laugh, her own love for him swelling like a tidal wave, softening the heat of the river that traversed her for just a second – only a second, because the succubus’ love for him also swelled – yes, the demon loved him as much as she did – and it pulled her under.

This was it. This was the moment, she simultaneously dreaded and craved.

Karl reached up, one hand in her hair, the other cupping a breast, both hands pulling her down so she couldn’t escape what she was. “Let her out, Elena. It’s okay … let her out.”

His glow intensified, and she whimpered as she felt her hold on the demon slipping.

Somewhere outside and beneath them, the ground rumbled with the quakes that had begun yesterday, and not eased off. Angels had fallen and demons walked the Earth among humans, all waiting in limbo for a dragon to rise.

“Oh, God! Let go, Elena!” His golden glow exploded from him and filled the room.

The succubus mirrored his reaction with her own need and Elena released her, unable to hold her back any longer.

Her skin cracked from head to toe, turned grey like cement – an arid, stony existence that only sexual ecstasy could completely nourish. Her eyes beamed green.

The demon hissed in victory, slammed herself onto her prize and held his writhing body down as she took every last drop she could from it, finally collapsing on top of him.

Through the haze of post-orgasm, Elena resurfaced. “Karl?” she said, shakily.

“Here.” His arms, with muscles trembling, came up around her. “I’m here. Shit … that was out of this world.”

Tears welled in her eyes. They were relief, joy and sorrow all rolled into one. Relief that Karl was alive; joy that she’d brought him pleasure, and sorrow because, even though the apocalypse was happening outside, it took place inside her every time they made love.

“You and I,” she whispered. “The love we have – I don’t want to ruin it with … I don’t want my need to overshadow everything, but it always does. Do you ever wonder what it would be like if it was just us? No demons, no angels – just us … would we be … nothing?”

Still embedded within her, his embrace tightened. “It’s not our supernatural halves that define us, Elena. Just us? That’s not nothing.” He nudged her forehead with his nose, and she met his gaze – loving, calm, steady… He placed a lingering kiss on her lips. “That’s everything.”