Just over a year ago I was on the point of giving up writing erotica. I loved doing it, I enjoyed my forays into the fantasy world, especially short stories, even relished the look of shock/surprise/arousal on people’s faces at dinner parties/the school gate when I told them what I did, but it was becoming disheartening.

Firstly, in the twenty years since my first short story was published, the fees for a story had shrunk from around £200 to about £75 so that it was barely worth the time spent writing. You could just about call it a hobby that paid pocket money.  Secondly, the advances on novels remained fixed as the years rolled by, the royalties seemed to dwindle, apart from foreign sales, and it was very rare to see any of your books for sale on a shelf for more than a month or so, if that. Thirdly, from the creative angle, I found myself increasingly uncomfortable with the more hardcore content I was being asked to write, which didn’t sit with my natural, more romantic bent. And finally, magazines and imprints such as Black Lace started to go out of business.  Although our faithful editor kept us close as he moved on, it looked as if the genre was about to die a death.

In other words while romantic publishers such as Mills and Boon ventured successfully further down the raunchy route, erotica, always the poor relation, was being marginalised to the point of extinction, certainly in the traditional format.

And then came 50 Shades.  At first I resented the left field approach of a novel and novelist who had come out of nowhere with a ready-made trilogy and hit the kind of sales figures the rest of us could only slaver over while we had been toiling at our craft for more than 20 years. A lot of cynics predicted that the series was a one-hit wonder, and that the call for erotica would evaporate as quickly as it had materialised. I certainly didn’t hold my breath, even when I read that publishers were beginning to seriously consider erotica as a genre to include on their lists. Some authors were asked to re-write the classics as erotica and some bone fide erotica writers were able to leap into the breach with a catalogue of novels and trilogies ready for re-issue.

But I was engrossed in self publishing a collection of short stories under my own name, and was halfway through a ‘literary’ novel when I got an email from my previous editor, who was now ensconced with Avon at Harper Collins.

The guidelines were different from the previous model of erotica. While the romance and intensity, as well as the quality of expression, was to be ramped up, the explicit tone and graphic use of expletive language was to be reduced. So I felt that I would be able to fly with my more natural style of writing, while challenging myself to write an entire novel, yea trilogy, with nary the use of an ‘f’ or ‘c’ word.

Some challenge, and who could resist? 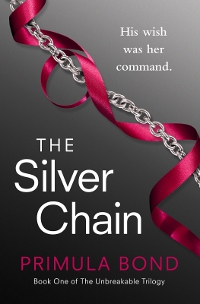 And so The Silver Chain was born, unlocking my imagination, creating a love story complete with hurdles, obstacles, sinister secondary characters and cliff hangers, and lavishly describing travel locations (London, New York, Venice) and experiences (photography, cooking, seduction) that I had enjoyed in my own life. Add to the pot a sexy hero culled from various personal heart-throbs and a gorgeous heroine called Serena Folkes and you’ve got me, but on a really good day.

The Silver Chain is the first in Primula Bond’s new Unbreakable Trilogy published by Avon Books at Harper Collins. It is available on ebook now and in paperback and is a must read for anyone who likes their erotica intelligent, romantic, intense, sumptuous, sexy, daring yet real, and set in glittering locations.

Blurb of The Silver Chain:

Twin souls colliding? Or was Gustav waiting for her?

Young photographer Serena Folkes believes she’s struck gold when the tycoon Gustav Levi offers to showcase her debut exhibition. But there are strings attached. Serena must move into Gustav’s London town house and agree to pleasure him in any way he chooses. Patron and protegee, they are bound by the silver chain that symbolises this contract until the last photograph is sold.

As her work sells and Gustav’s demands increase, Serena surprises them both with her feisty character and eager participation. It’s not such a tough ask. Gustav is exotic and intriguing. She is hungry and willing to learn. Gradually she learns what demons have driven him to strike bargains rather than to trust.  And when Gustav discovers that Serena’s abusive past has almost destroyed her ability to love, he realises they are not so different after all.

Can they plan a future together, or will a single act of betrayal return to haunt them?

‘I really loved the book – it was different – but good different.. I can’t wait for book 2 – the cliffhanger really left me hanging! I want to know what happens with Serena and Gustav!’  B J’s Book Blog

‘I felt the story was quite well written and it took me a day to read as I romped through it and didn’t want to put it down.’  Goodreads.

You can buy The Silver Chain at Tesco, Smiths and Morrisons, or on amzn.to/10iqbmC