Surrender to Fire by Skylar Kade 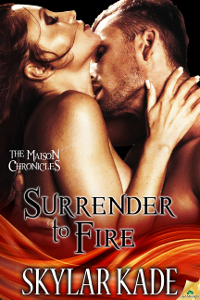 One scorching-hot lesson could leave her begging for more.

Reeling from the double whammy of her Dom’s abandonment, and accusations of colluding with a plagiarizing author, all literary agent Camille Winter wants is some low-profile, drama-free quality time.

Damien is unprepared for the way her beautiful submission gets under his skin. And Camille never thought she’d fall, hard, for just the kind of man she’s sworn off. But when her ex’s vague threats turn serious, Damien fears he’s already lost the chance to claim her for his own.

Product Warnings: This book contains a fiery woman burned one too many times and the Dom who entices her to submit to the heat between them.

Three hours later, he was on his way up to Maison Domine. With his smartphone calling out directions, he could keep all his focus on the scenery and the satellite rock station he was piping through his speakers. The freeways of LA weren’t much for the view, but once he hit the mountains…wow. It was like the trees drained away all his tension. Or maybe he was relaxing because he was closer to sating his needs.

After missing the turnoff the first time he drove by, Damien pulled a U-turn and crept back down the road until he saw the weathered wood sign with an arrow pointing up a narrow, tree-lined road.

His car rolled down the long drive, soundtracked by Guns N’ Roses’ “Welcome to the Jungle”, then burst into a wide-open clearing with a jaw-dropping view of the surrounding mountains. A large rustic structure took up the right half of the clearing, with most of the rest devoted to parking. More cars filled the lot than he’d expected for a Friday afternoon, but if other Angelinos had had weeks like his, maybe it wasn’t that big a surprise.

Parking his car, he wondered what the large building held. Yes, he’d heard other kinksters rave about the private club, but he’d been to his fair share of upscale establishments before. What set this one apart?

The answer sauntered across the parking lot, seeming to come from nowhere and heading for the front door. The woman’s body hit him like a wrecking ball. Every sense went on high alert and his heart jacked up its beat.

Jet-black hair spilled around her shoulders in soft curls, obscuring her face. Her arms were crossed as she walked, as if warding off the mild day’s nonexistent cold. Slumping shoulders drew more attention to the beautiful hourglass shape of her back, her body encased in a flowing, black dress that clung in all the right places. She looked tall, maybe eye level to his chin, though maybe that was her black combat boots. Not fragile—supple. Warm.

And crying. Her shoulders were shaking as she turned away from the building, facing him head-on. His demolition experts had nothing on that look. He wanted to kiss her reddened nose, wipe the tears from under her eyes. He popped open his door and headed for her.

The woman’s eyes widened and she froze, a deer in the headlights.

Car door open, keys still in the ignition, nothing mattered but this woman. He approached slowly, not wanting to alarm her. “Are you okay?” His voice echoed through the parking lot, though they weren’t that far apart.

The dress swirled around her knees, tossed by the wind whipping around the mountaintop. The soft neckline of her dress draped around her full breasts. His palms itched to cup them.

She nodded, letting her hair once again hide her face, which looked like it was made of the finest bone china. “Shitty week.”

He took a few steps closer, then paused. He saw faint tan lines on her wrist, barely there, that looked like she’d been wearing a bracelet cuff for some time. “Is he really worth crying over?”

Her pink lips clamped shut, then opened. “Look, thanks for your concern, but, really, it’s none of your business.” She swiped aside her hair to reveal twilight-blue eyes cracking with anger.

Her defiance stroked down his chest and reached for his growing erection. “I’m sorry, but when I see a submissive alone and crying, I make it my business.” He invaded her personal space until she had to tilt her chin up to meet his eyes, but she didn’t back up. All traces of her dejection were gone. Good.

The wind pulled at her curls as she jabbed a finger in his chest, like she was digging straight for his racing heart. “I’m not a submissve.”

Her nails weren’t painted or manicured, not high maintenance like many women he’d dated. He found it refreshing. Authentic, like her anger. “Not a submissive?” He grabbed the hand that had poked him and raised her wrist to the light. Her pupils dilated and her breathing tightened. Her tongue darted out across her bottom lip and Damien had to restrain a groan. His thumb stroked along her inner wrist where her pulse was jumping like a living thing trying to escape. “How long did you wear his ownership bracelet while you weren’t a submissive?”

She tugged at her wrist. A halfhearted attempt, since her other hand was clenched halfway to touching him. Being the ever-helpful Dominant, he closed the space between them, pulling her wrist up to his lips and laying a kiss on the pale flesh of her pulse point.

“What the hell do you think you’re doing?” she hissed.

In response, he let her go and stepped back. “I’m proving a point.”

She swayed toward him before scowling and taking her own shuffle backward.

Her cocked eyebrow made him ache to play her until she begged to submit. She was a sassy thing and they had some chemistry crackling between them—something he certainly didn’t have with Lara, his demo bottom. “If you’re not a submissive, then I’m the Pope.”

“That’s your point?” Her jaw ticced and when her hands fisted on her hips, it made her dress strain across her breasts. She looked beautiful when angry.

Through sheer force of will he held his ground, keeping the distance between them. “No, sweetheart, the point was that you’re not crying anymore.”

Her eyes spit every insult her lips seemed unable to form. It only made his cock harder. He replied with his most guileless smile, which only seemed to infuriate her. With a clench-jawed scream, she pivoted away and headed for the woods.

“See you later,” he called as she retreated. Yeah, coming up to Maison Domine early had been a good idea. He’d need the extra time to learn more about this mystery “not a submissive” woman.