Simon Lipson Tells Us About His Novel Inspiration

Thank you for inviting me to contribute a guest post.

A number of people have asked me what inspired me to start writing Song In The Wrong Key and the truth is, I’m not entirely sure. I remember sitting in my local Starbucks a couple of years ago with time on my hands (I was between engagements, dahling) and just started writing. I thought this would be an exercise, something to pique my interest until a voiceover gig or radio show came along. Neither did, it seems, so I carried on. And it didn’t take me long to realise that I was onto something, inspiration in itself. I don’t mean that I believed I was writing a great book, by the way, more that, having suffered through the writing of a dark psychological thriller some years ago, I immediately recognised that I was now doing something in a style that came naturally to me.

I’ve been a (semi) professional comedian/impressionist, actor and comedy scriptwriter for 20 years and have always looked at everything from the comedic standpoint first. That is not to say that I don’t have a serious side (aren’t all comedians meant to be miserable souls?) and I try not to laugh at funerals, for example, but even in the direst of circumstances, laughter can be a release if not a cure. The protagonist, Mike Kenton, is a middle-aged man whose previously contented existence is thrown out of kilter when he loses his job. His marriage comes under strain and his family life is thrown into jeopardy. Meanwhile, his career fails to re-ignite and he hits rock bottom. What’s funny about that? Well, if you ask me, most of it; not in and of itself, of course, but in the gallows humour it provokes. The fact that most reviewers have agreed that the book is ‘laugh out loud funny’ bears testament to that. But I hope Mike, and indeed all of the characters and situations, are real too. This sort of stuff can and does happen; I’ve just chosen to attack it from a comedic perspective.

I’d always been drawn to tales about Ordinary Joes defying the odds, in particular, those whose previously obscure, private lives suddenly become public. As much as I detest the premise behind shows like X Factor (and the drivel and tittle-tattle that spin off from them) there’s something fascinating about them too. As a thwarted musician myself, I always wondered what it would be like to be thrown into the lion’s den of public approbation and opprobrium, so that was the inspiration behind Mike’s journey.  I thought this would play out as an interesting contrast to the disasters befalling him in his professional and family lives.

My other key inspiration was less to do with the book itself than the lack of books like it in the fiction market place. I’m an avid reader but struggle to find contemporary fiction that makes me laugh. Most of the book shops these days are drowning in fantasy, YA, Scandinavian thrillers and commercial erotica. I have no problem with any genre, but the kind of authors I enjoy – Nick Hornby, David Nicholls, Tom Wolfe, Jonathan Tropper – are increasingly rare. So either I’ve misjudged the public mood or I’m at the vanguard of a new breed of comedy novelists. Time will tell! 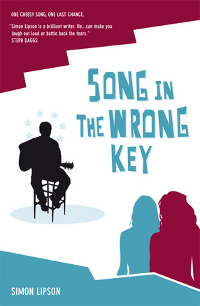 Michael Kenton is a middle-aged man living in middle-class comfort with wife Lisa and daughters Millie and Katia. Drifting complacently towards retirement, Mike’s world is turned upside-down when he is thrown unexpectedly onto the career scrapheap.

While Lisa’s career sky-rockets, Mike slobs around in his track suit playing guitar, rekindling his teenage love affair with pop music. Knowing Lisa wouldn’t approve, he plots a secret ‘comeback’ at a grimy Crouch End bistro where music executive Ben, desperate and out of time, asks if he can enter one of Mike’s songs into the Eurovision Song Contest. With nothing to lose, Mike focuses on Eurovision but quickly finds himself staring down the barrel of low level fame. His crumbling marriage now page five news, he must choose between his musical dream and mending his broken family, a task complicated by the re-appearance of ex-love of his life Faye. 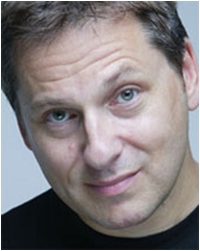 Simon Lipson was born in London and took a law degree at the LSE. After a spell as a lawyer, he co-founded legal recruitment company Lipson Lloyd-Jones in 1987. In 1993, Simon took his first tentative steps onto the comedy circuit and has since become an in-demand stand-up and impressionist across the UK, as well as a regular TV and radio performer/writer. His broadcasting credits include Week Ending, Dead Ringers, Loose Ends and Fordham & Lipson (co-wrote and performed own 4 part sketch series) on Radio 4; Interesting…Very Interesting and Simon Lipson’s Xmas Box on Radio 5 and And This Is Them on Radio 2. He is also an experienced voice artiste who has voiced hundreds of advertisements as well as cartoons and documentaries. His first novel, Losing It, a thriller, was published by Matador in 2008. Simon is a columnist for Gridlock Magazine (www.gridlockmagazine.com). His next novel, Standing Up, will be published by Lane & Hart in Autumn 2012.

My show, The Accidental Impressionist, is on at the Camden Fringe 20 – 23 August @ 8pm. Everyone welcome! Details and tickets here: http://j.mp/JDPBnu

Danger Warning from Sommer Marsden → ← Kitti Bernetti Dishes the Dirt Behind Her Novella, The Thousand and One Nights
© 2022 K D Grace
Site created and maintained by Writer Marketing Services