I’m sure I’m not the only one whose editor has said, “This is telling. SHOW your reader . . . “. Have you ever wondered exactly what this means?

Showing: Mary stepped from the steaming shower and wrapped herself in a thick white terrycloth towel. Her hair was bound to keep it dry, but now she let it down. She watched the coppery curls fall about her bare shoulders in the foggy mirror, her reflection an apparition in the haze.

In the showing example, the reader is in the bathroom with Mary. While her actual features are blurred in the foggy mirror, we know she has coppery hair and it’s long enough that if falls about her shoulders.

This example shows us John is an experienced guitarist. We see him playing the instrument in a small room, possibly a recording studio. The piece he’s playing awakens particular emotions in him, which the reader also gets a sense of.

How do we know any of this? Because we’ve been shown through the narrative.

We can also be shown a story through dialog. Look at these examples —

Telling: Mary paled, as if she’d seen a ghost.

Showing: “Mary, you’re white as a sheet. You look like you’ve seen a ghost.”

Telling: John loved dogs, but not jumping all over him.

Showing: “Mary, you know I love Spike, but would you mind controlling him?”

In the business of writing fiction, writers must tell a story in such a way that readers can see, and feel, what’s happening in the story. But does this make us storytellers or story showers?

Imagine you’re a medieval trader of exotic spices or fabrics, and you’re visiting a town to sell your wares. The local lord invites you into his home where he trades a hot meal and a bed for the night in exchange for you telling him tales of your travels. What tales would you tell? One of a dangerous ocean voyage? Perhaps, exotic people from other countries? Maybe you’ll relate some of the ancient stories you were told while in that foreign country.

What if you were a time traveler who’s gone back in time and you must explain about where you came from and how you found yourself in the past? How do you explain cars, planes and walking on the moon to someone who wants to know what the future is like?

As writers, we take these stories and write them in such a way that readers are pulled in, much the same as listening to traditional oral storytellers, and become part of the story. The biggest difference is that oral storytelling relies heavily on watching the storyteller, as he/she may become animated or perhaps sing to embellish the story. With fiction, the reader only has the page filled with words and their imagination. Their imagination is fueled by the words we put on those pages. And while a simple story, such as Cinderella, might be enough to entertain young children, an adult wants a story with a lot more meat in it. We want to tell a story to keep our readers up all night turning pages, not tell a bedtime story that puts them to sleep. 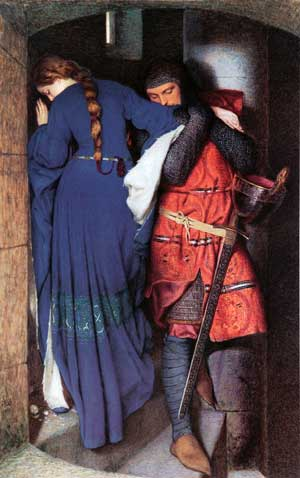 One of my favorite stories is an ancient Danish ballad called Hellelil and Hildrebrand. It was translated into English in 1891. The ballad, or a story written as poetry, tells the story of forbidden love. Kind of the Romeo and Juliet of Denmark, if you will. In my next example, I’ve pulled a scene from the ballad in which Hellelil explains how her father, the king, has twelve knights watching over her safety, and how she’s fallen in love with one of them. Hildebrand happens to be the son of the King of England. Son of royalty or not, he’s still just a knight and she’s a princess. Read this scene from the original ballad and see what you get from it —

My father was good king and lord,

Knights fifteen served before his board.

He taught me sewing royally,

Twelve knights had watch and ward of me.

To folly the twelfth did me bewray.

And this same was hight Hildebrand,

The King’s son of the English Land.

But in bower were we no sooner laid

Than the truth thereof to my father was said.

Then loud he cried o’er garth and hall:

‘Yea draw on mail and dally not,

While this excerpt is telling an interesting story, it’s not what today’s mass market readers want. They want authors to show them the story through the protagonist’s eyes. Read my excerpt, showing what you’ve just read above —

“You must go.” She pushed her lover’s shoulders, yet he would not release her.

“I’ll not leave you, Hellelil. I love you. No one will keep us apart.”

Her heart pounded in her breast, but she couldn’t tell if it was from the danger they were both in or the thought of never seeing Hildebrand again. Most likely it was both. He was her one true love, but she knew if her father found them together like this, his anger would know no end.

“Please, Hildebrand. If my father catches you here, he’ll show no mercy. You know I’m promised to another.”

“I’m a Prince of England, and I will have you.”

He embraced her within the safety of his powerful arms. The scent of their recent lovemaking clung to his skin. One more kiss, one more embrace, certainly laying with him one more night would do no harm. She knew they were both already meant for Purgatory. He’d taken the virginity she so gladly gave him, for she loved him too, and would rather him have the gift of her innocence than a man she didn’t love.

Just then, there was no mistaking the sound of her father’s voice bellowing below stairs.

“Hildebrand has gone too far. I will see his head on a pike at my gates before the day is out.”

The sound of clanging metal grew louder as her father’s knights ascended the narrow stairs.

Hellelil’s tear-filled gaze flashed across Hildebrand’s face. She sought to memorize everything about him. The color of his eyes, the wave in his hair . . . his kiss-swollen lips.

She stroked her fingers across those lips, remembering the feel of them on hers not moments before. Her chamber door was locked, but it would not remain closed for long. One more kiss was all there was time for.

She pulled him down to her. “Kiss me, Hildebrand. For if I’m to die this day, I will take the sweet memory of your kiss with me.”

Hey, I write romance so you knew that would be schmaltzy! But, as you can see, the modern day version is the same scene, but it’s written in such a way as to flesh out the scene. It puts you in the room with Hellelil and Hildrebrand, and lets you into Hellelil’s head, and heart, by showing the story through her point of view. You feel her anxiety of being torn between her love for Hildebrand and the fear of their being caught together. Her heart pounds, she touches his lips with her fingertips, her love races through her in a desperate attempt at showing one last act of that love. We feel a great sense of urgency in this piece that we don’t feel in the original ballad.

The reader also knows Hildebrand’s feelings toward Hellelil by his words and the narrative action. Hildebrand holds Hellelil within the protection of his strong arms, his declaration of love, and his promise to have her as his own. We sense because he’s a prince of another realm that he holds some stature in the household where he is. He’s not just a simple knight who’s taken the virginity of the lord’s daughter in a heartless dalliance — he loves her. Hildebrand is a man of honor and breeding, and he knows his own heart and mind. So what if she’s promised to another.

Did you get any of that from the original ballad? Didn’t think so. Why? Because the first version tells the story. My version shows it to you.

ONE NIGHT IN DUBLIN 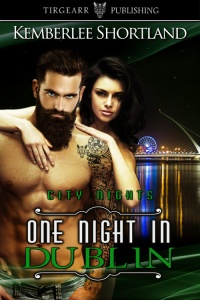 At her mother’s prompting (nagging) about grandchildren, Sive wonders if it really is time to settle down. She’s just finishing college so she should be thinking about her future. But is she ready to settle down? Is she ready for kids? And more importantly, which of the three men she’s been seeing does she want to spend the rest of her life with?

Sive has a choice to make, and only 24 hours in which to make it.

We all make them. From the moment we wake up, it’s: “do I get out of bed now or hit the snooze button . . . again?” “shall I wear this outfit to work or that one?” “tea and toast or grab something on the way?”

It’s all mundane bullshit. They’re all choices we make on the fly without even realizing we’re making them.

Think about it. What choices do you make when you’re not thinking about them? Like going home from work. You get on the train, find a seat and wait for your stop. But when you get there, you wonder how the hell you got there because you don’t remember making the journey.

What I’m trying to say is that we often go on auto-pilot and just do what needs doing without any real thought, because there are usually more pressing things to think about—the important things.  Or seemingly so. Like, what movie to see, what restaurant to eat in, where to go on holidays . . . and for some girls, this pair of sensible shoes on sale or another pair not on sale but immensely sexier?

For me, today, my choices aren’t so mundane, and they’ll require a lot of conscious thought. I have an important decision to make. One that could change my life forever, pardon the cliché.

They—whoever ‘they’ are—say there is someone for everyone, that we all have a ‘type’ of person we’re attracted to. I’m still figuring it all out . . . exploring to see what is my type . . . that someone just for me. And it doesn’t help that my mum’s voice is in the back of my head, asking . . . i.e. nagging (yes, I just said i.e.) . . . when I’m going to settle down and give her grandkids.

First, let me say this: I’m not a slut. I’m not loose, I don’t carelessly sleep around, and I don’t do one-night stands. I just love men and all of their vast differences.

What can I say about my boys that every other woman out there doesn’t already know about men? Charmers, every one of them. But they all give me something I need.

Tonight I need to decide what, or who, I need the most—Fitzy, Moss, or Sully. 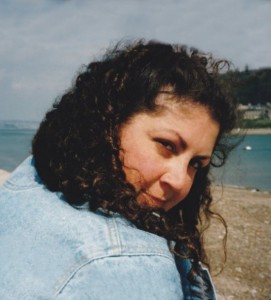 Kemberlee Shortland is a native Northern Californian who grew up in a community founded by artists and writers, including John Steinbeck, George Sterling, and Jack London. It’s no wonder she’s loved telling stories since she was very young. Kemberlee completed her first novel at 21 and hasn’t looked back. In 1997, she left the employ of Clint Eastwood to live in Ireland for six months. It was there she met the man she would marry, and permanently relocated to live in Ireland. While always writing, Kemberlee earned her keep as a travel consultant and writing travel articles about Ireland. In 2005, she saw her first romance sell, and to date, she has nine published romances. When not writing, Kemberlee enjoys spending time with her two Border Collies, who feature on the cover of A Piece of My Heart, and also knitting, gardening, photography, music, travel, and tacos!

Make sure to follow the whole tour—the more posts you visit throughout, the more chances you’ll get to enter the giveaway. The tour dates are here: http://www.writermarketing.co.uk/prpromotion/blog-tours/currently-on-tour/kemberlee-shortland-2/