Shanna Germain Shares The Story Behind the Story of Her Novella, Safe Haven

It’s my pleasure to welcome Shanna Germain to a Hopeful Romantic to talk about her fabulous novella, Safe Haven, which is in Xcite’s One Long Hot Summer anthology. Another one of the lovely Secret Library volumes.

The idea behind Safe Haven was one I’d been thinking about for a long time, but just hadn’t found the time and impetus for. I grew up on a farm where we were always rescuing animals – or having rescue animals brought to us – and that seemed like the perfect backdrop for two people to meet and fall in lust and love. And it also seemed like the kind of woman who ran a rescue farm would be the kind of woman who was a perfect heroine. She’d have to be strong and independent, but also big-hearted and determined. Of course, I also wanted to give a huge helping of unmet lust, just to make sure things really sparked. 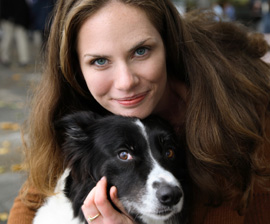 When The Secret Library said they were looking for novellas with strong women and hot men, I just knew that it was time to find the characters to populate the steamy idea I’d been carrying around. 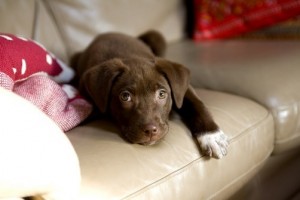 I found the perfect image of Kallie right away – a natural beauty with intense eyes who loved animals and had this crazy, world-changing laugh and smile. Gauntlet – the puppy who features predominantly in the story – was also easy to find. I knew he needed to have one white paw and those big puppy eyes that just melt your heart. 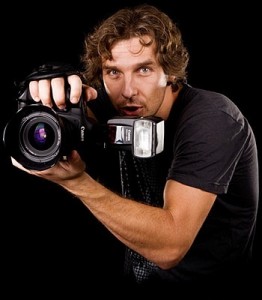 It took me much longer to conceptualize Darrin, the alpha male hero type. Most of the guys I write don’t really fit that mold; I like to create characters that are a little bit broken, often a little socially awkward, but who really do it for the right partner. So I wanted to find a way to combine the two elements – a man who was clearly an alpha male in one situation, but who was really soft and vulnerable in another. When I found an image of a dark-haired, charismatic man holding a camera, I realized that was the key to Darrin’s character. Behind the camera, he could be the strong silent type. In front of it, he could be something else entirely. And sexually? Sexually, he could be the kind of man who was happy to take control, and just as happy to give it up—to the right woman.

There were sparks from the first meeting (as you can read below), but by the end, things got even hotter—and sweeter—than I expected. I always love when that happens. 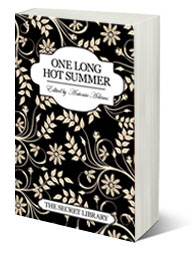 It wasn’t one of the Eric’s hired hands. And it wasn’t, at least as far as Kallie could tell, a new rescue animal. And if it was fresh hell, it was incredibly sexy fresh hell in jeans and black boots. A fresh hell of a tall, curly haired man pushing a motorcycle up her gravel drive. As he walked, the horses were following him, keeping as close to the fence line as they could, tossing their heads and snorting at him.

A second later, she realised they weren’t snorting at the man. They were snorting at the wriggling bundle of fur that was bounding up the driveway after him. Great. So it was a random drop off. She wanted to stop them right there and tell them that Safe Haven was full. She didn’t have time or room for any more strays. Not even cute strays. Especially not cute strays. She had enough trouble on her hands.

But her voice, which had so recently been crooning at a huge horse, now seemed stuck in her throat.

‘Hey there!’ the man called as he got closer. He raised one hand off the motorcycle in something like a wave. He wore a thick silver ring on his middle finger, and her eyes were drawn first to its glint, and then to his long fingers and strong wrists, then to the length of his bare arm, the lightly tanned bicep that was offset by the blue fabric of his T-shirt. ‘Are you Kallie?’

She started to say no, even though she knew it wouldn’t do any good; someone had obviously sent him, even though everyone knew Safe Haven didn’t rescue dogs or cats, and it definitely didn’t rescue beautiful, curly haired men with motorcycles and fantastic smiles. But she started to deny her birth name anyway, because this was trouble walking up her driveway. She could feel it. Even the horses could feel it.

Then he lifted up his sunglasses, pushing them up on his head and any words she might have said completely disappeared.

He had blue eyes. Not just blue eyes, but poppy-blue eyes. Fall-into-a-dream blue eyes. Sky on the first day of summer blue. Almost surreal in their bright gaze, surrounded by small wrinkles as he gazed at her. She heard her own sharp intake of breath and felt stupid for its sound in the mostly quiet day.

She nodded. Look away from his eyes, she thought. Just … look anywhere else. But she couldn’t. They were so blue, threaded with silver that shone funny in the sunlight.

‘Oh, good,’ he said. He looked away – she was so grateful for being released from his gaze that she could hear her heart thumping in her chest – and kicked his bike stand to settle it on the gravel. Then, he bent down and picked up the wriggling bundle of fur that had been stalking his boot laces.

In contrast to the man’s intense blue eyes, the puppy’s curious brown gaze was a hundred times easier to take. His tongue lolling to the side, he settled into the man’s arms and gave a happy yip. The puppy licked his fingers, and the man gave a quick, delighted laugh.

Kallie’s heart did something funny in her chest. She stuck her hand in her pocket, realised she still had half a carrot in there, and pulled her hand out quickly, trying to wipe the wet off on her jeans without being obvious.

The man didn’t seem to notice her movements. He reached for the puppy’s single white paw and made it move up and down in the semblance of a wave.

‘Hi, I’m Gauntlet,’ the man said, his voice a growled approximation of a puppy voice. Kallie choked back laughter, and ended up just coughing in the process.

‘Fine,’ she said after a moment, although she clearly wasn’t. She was the world’s biggest dork. She cleared her throat, and finally found her voice. ‘But … Gauntlet?’

The man looked at the puppy in his arms as though he’d just seen him for the first time. Then the man smiled. Dimples. Wrinkles. Oh sweet heaven. She was in so much trouble. She thought her libido had dried up after Erik left – an event her friend Stephanie called the Double B, “the Big Breakup” – but clearly that wasn’t true. Go back to the barn, girl. Now. Before you get yourself in more trouble.