Rock Your Soul by Sara Brookes 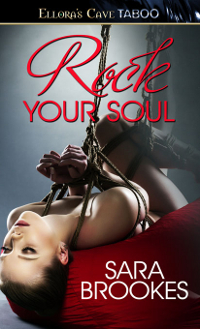 Beth has been scarred both inside and out by a sadistic Dom and has worked hard to put the pieces of her life back together. However, the successful disc jockey knows one piece doesn’t quite align. She yearns to submit and searches for the one Dom she’s convinced will help bring her to lusty new heights.

Two broken souls will find a way to heal together. Beth discovers what she needs in Ryan, and her journey mends Ryan’s heart. But when the life Beth abandoned rises from the shadows, Ryan realizes there’s something far worse than his tortuous past—a future without Beth.

She blinked, stunned at the power and command in his voice. As the control washed over her, she wanted to respond, but she found herself too annoyed things weren’t going according to plan. While she’d expected him to ask her questions to find out what he was in store for, she didn’t expect anything of this magnitude.

Angry, she returned his glare.

He smirked. The reaction caused her insides to turn to jelly, her vitriolic thoughts vanishing on the chilly night air. Why did he have to be so goddamned handsome and annoying at the same time?

“I suggest you listen if you want me to consider taking you on as I don’t like repeating myself. To. Your. Knees.”

She opened her mouth to protest and he tilted his head down just enough to give her another message. A very stern one she couldn’t help but listen to. He would not be ignored.

She dropped her hands to her sides and slowly lowered to her knees. The rough rocks immediately bit into her shins, but she wouldn’t give him the satisfaction of showing him she was in pain. She heard the unmistakable sound of buttons popping on his jeans and looked up just in time to see him part the denim. What in the Sam hell did he intend to do? If he expected her to suck his dick right here and now, he’d better think again.

The authority behind those two words coursed through her, compelling her to obey. It had been a long time since she’d had this kind of reaction. Swallowing the lump in her throat, she complied. The denim pooled around his ankles and she found herself staring at the pile.

Just as she started to wonder if Elena had been out of her mind to recommend this man, his hand slid against the top of her head. His touch was almost calming and, despite her annoyance, a feeling of tranquility washed over her. His fingers combed her hair, catching the elastic holder from her ponytail, pulling it free. He continued to run his fingers through the strands, fanning out her hair. She relaxed under his persistent touch. The pain in her legs melted away and she gave a soft sigh as her body started to quietly buzz.

The crunch of rocks jolted her back to the moment. She listened to him move away, leaving her alone on the rock path in front of his house.

What in the hell?

Beth looked to the left and her eyes widened in surprise as she spotted him. He strolled toward the small lake at the front corner of the field, towel swinging in his hand as he walked. Those jeans of his were at her feet and she now had an unobstructed view of his bare ass.

Christ on a slinky going down an up escalator if he doesn’t look even better out of those jeans. Transfixed by the bunch and pull of the muscles in his thighs and butt as he walked over the uneven ground, she forgot her place and openly gawked.

When he reached the bank at the water’s edge, he dropped the towel and walked right into the lake. She expected him to dive under the surface, but instead he slowly moved until the water lapped as his hips. He sunk as if he were a knife cutting through the water, disappearing with no more than a quiet ripple disturbing the surface. The lake smoothed in seconds.

The only indication she ever had company were those damn jeans on the ground in front of her.

Sara Brookes is an award-winning author who has always been fascinated by the strange, the unusual, the twisted and the lost (tortured heroes are her personal favorite). She is an action movie junkie, addicted to coffee and has been known to stay up until the wee hours of the morning playing RPG video games. Despite all this, she is a romantic at heart and is always a sucker for an excellent love story. Born and bred in Virginia, Sara still lives there with her husband and daughter. The entire family is owned by two cats, Galahad and Loki, who graciously allow the family to cater to their every desire.