Out Now – The River’s Embrace by A. Silenus

With her blond tresses and blue eyes, London fabric retailer Margery “Margie” Tull is used to being admired. When she’s hired to decorate a riverside manor house though, she suspects ulterior motives.

Lord of the manor Percival Winstanley reveals a long ago love triangle leading to death and the bewitching of his son and heir Stephen. Margie’s cousin Shyan is supposed to protect her. But he’s lured away by Winstanley’s cougarish housekeeper, Mrs. DePlessey, leaving Margie in the dubious care of servant Kern.

Unsure whom to trust, Margie turns first to artist Raphael Watts, also working at the house. Meanwhile Stephen hovers in the background trying to draw her attention to a cottage across the river. Somehow the women who live there are a portent of Margie’s fate. If only Stephen can convince her of what lies in store Margie can give new hope to the manor and its heir. 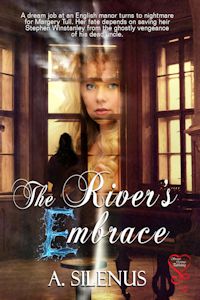 Margie crept from the hall to the library and back again. It was the strangest thing how people either were not there when they were wanted or were breathing down your neck and scaring you out of your skin. There seemed no middle way in this house.

She would have to go upstairs. It was the obvious place to look. She started climbing steps, feeling like an intruder and unsure how she would explain why she was snooping around the house if she did find someone. A snigger told her she was on the right track. Tiptoeing across the landing and down a passage way, she homed in on the intertwined voices, Shyan’s wisecracks and Mrs. DePlessey’s purrs of appreciation.

Through the gap between an open bedroom door and the jamb, Margie watched unobserved. Shyan was standing on a foot stool wearing only underwear. Evidently measuring requirements had reached the upper thigh. A crouching Mrs. DePlessey’s glistening nails trailed a tape over the city boy’s pale flanks. Shyan’s muscles tensed as her fingers neared the straining material of his briefs.

“Am I tickling?” The question was made to sound guileless, like a dentist asking “Am I hurting you?”

I’ll bet it doesn’t, Margie thought. She was so mad at him. Had he forgotten why he had come? Not to dally with the housekeeper, that’s for sure.

The waistband was the next number on Mrs. DePlessey’s list, and as her arms circumnavigated Shyan’s midriff with the tape measure she could not refrain from rubbing the bangles on her wrists against his bare skin. The metal must have been cold, because Shyan jumped slightly at the touch.

But there was nothing simulated about Shyan’s reaction once the tape made contact at the base of his spine. Margie didn’t have to see below his waistband to know his self-control was on the edge. It wouldn’t take much to unbalance him.

All it did take was another move in Mrs. DePlessey’s repertoire of suggestive contact. As her breasts prodded his stomach, ostensibly so she could complete the tape loop, Shyan’s hands descended onto her shoulders. Then the tape was forgotten as her lips came up to meet his. Her clasping arms steadied him on the wobbling stool. They moved to the bed in an uncoordinated tango, and toppled into a grinding embrace. Shyan tackled the buttons on her blouse. His hand groped for the bra clip at her back. He suckled on an inflamed turret of a nipple, with a gusto equal to Ainsworth’s effort during Margie’s previous spying escapade. Then the couple’s hands met and, steered by one or the other—or both—glided in unison down the crevasse between their bodies until they disappeared inside Shyan’s briefs.

Margie was mesmerized. Exasperated as she was by her cousin’s easy compliance, she couldn’t help being fascinated by this mesh of desires. That was why it was so startling when Mrs. DePlessey rolled Shyan to one side and, with a light kiss on the lips, told him, “We must save this.”

Shyan gaped and attempted to insert a hand between her closed thighs.

She smiled, not in the provocative way Margie half expected, but rather as if Shyan hadn’t understood.

Silenus spent his early years in southern England and now lives in Arizona. He writes in various genres under different names. His erotica-oriented material includes three self-published sets of short stories, Fiends That Go Boink, which has otherworldly themes, Obsessions and Two Men And A Woman In A Boat.

For more about Silenus and his work, please go to his blog: Basic Writes: http://asilenus.blogspot.com/