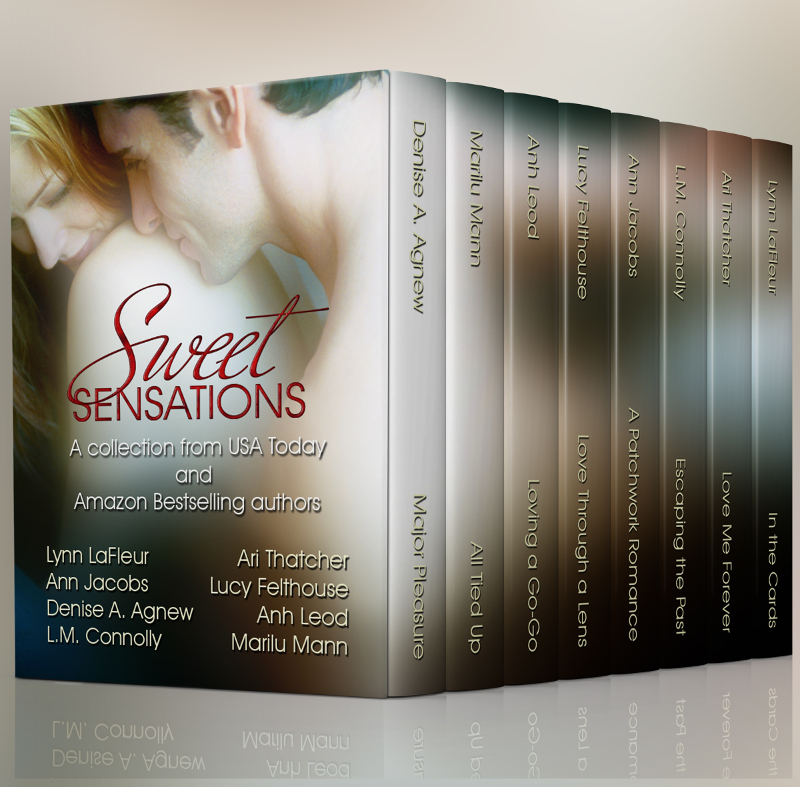 In the Cards, by Lynn LaFleur

Catherine found her fantasy man stepping out of a greeting card…Can love break a curse put on Kane centuries ago, and bring him to her forever, this time?

Lovers for one idyllic summer, he said he’d call but never did…

When the laid-back billionaire and the new divorcee meet again by chance, can they rekindle a summer love to last forever?

A Patchwork Romance, by Ann Jacobs

A self-made billionaire, Jared has come home to the Smoky Mountains, looking for an elusive something that’s missing from his life…Will he find it in the arms of Althea, a simple country quiltmaker?

Major Pleasure, by Denise A. Agnew

Jemma has always wanted Blayne, but his army career makes her afraid to give her heart…

Will love let her overcome her fear, and commit to forever with the hot Special Forces officer?

Escaping the Past, by L. M. Connolly

His shady past, her present danger, and an international plot bring Jade and GARY together…

Can love thrive as they dodge bullets from New York to Naples and beyond?

A riveting tale of romantic suspense, never before published.

Love Through a Lens, by Lucy Felthouse

On location shooting film together, new graduate, Celine, is drawn to Edward, a British actor 30 years her senior…

Can the inevitable romance between them blossom into love?

Loving a Go-Go, by Anh Leod

Lexie, an heiress, finds her match in fellow boot fetishist, Adrian, who sells shoes in her family’s store…

Can a sexy romp during the holidays lead to a lasting relationship between these two?

In this sexy game of cat’s play, a thief and a billionaire make some interesting discoveries about each other…Will they learn things aren’t always exactly as they seem? 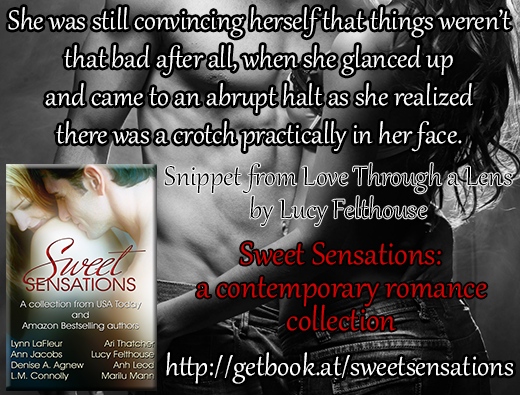 An excerpt from Love Through a Lens by Lucy Felthouse:

Celine Paterson, however, was a different story altogether. Newly graduated from university, she’d struggled to find filming work in her preferred field—fashion—and so she’d had to cast her net wider. Incredibly wide, as it happened.

She’d had no choice. It was this job or nothing. Crap money or no money. And, most importantly, this credit on her resumé or no credit at all. She knew she had to start racking the credits and references up soon, if she wanted to get ahead in the highly competitive field. 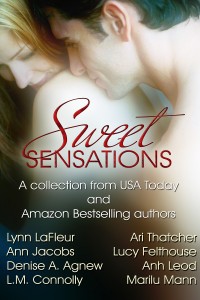 “Are you all right?” he asked, his blue-green eyes soft with concern. “I’m so sorry, you must think me incredibly rude. I honestly thought you were right behind me—you being a young thing and all that. It was only when you didn’t reply to me or answer any of my questions that I realized I’d inadvertently left you behind.”

“I’m all right,” Celine replied, her chest heaving as she fought to regulate her breathing and slow down her heart rate while she had the chance. “Just not used to this sort of thing. A walk for me is a stroll by a riverbank, or hitting the shops. I’m sure my fitness level will improve as we continue with the project. Go ahead, if you like. I’ll catch up with you… eventually.”

Edward shook his head. “No, let’s have a rest. I could do with a drink and a snack.” Turning, he looked around, then pointed. “Let’s head there. It looks as though there’s a patch of flattish ground big enough for us both to sit down.”

“Okay.” She followed him again, but this time only for a few seconds. Edward helped her remove her rucksack—which was almost as big as she was—and then immediately opened it and began removing things. It was only when she saw he’d long since taken out the drinks and snacks that she queried what he was doing.

“I’m taking some of the heavier items out of your bag. If I re-jig things, we’ll still fit everything in, but you’ll have a lighter load. Would you mind making some tea for us both while I do this?” He indicated the miniature camping stove, metal cups and other tea-making paraphernalia.

“No, of course not,” she said. “But there’s no need for you to do that. I’m perfectly okay with carrying my share of the weight.”

“I know you are. But I’m not. You’ve enough to put up with on this crazy project. I don’t want you getting injured or ill on me—I need you. Not to mention my conscience wouldn’t take it.” He sat beside her, looked at the large pile he’d made, and began sorting it into their respective rucksacks.

Shaking her head, Celine lit the stove and set about making the hot drinks. “Sugar?”

His eyes glinted with amusement. “Yes, three. What can I say, I like my tea sweet. And while we’re on this project I’ve got a good excuse—I need the energy. You should try it, it’s delicious.”

Wrinkling her nose, Celine nevertheless added three sugars to each of the mugs of tea. “Here you go.” She handed Edward his, then cradled hers, blowing on the liquid until it was cool enough to drink. “So, what did you mean when you said I’ve enough to put up with?”

Frowning, Edward took a gulp of his tea before replying. “I know this project isn’t ideal, Celine, not for you. For me, it’s wonderful—the melding together of several of my passions. But for you, it’s trekking through often unforgiving countryside with a shed load of gear and filming an old fart going on about big black cats, the ghosts of Roman soldiers and mysterious lights in the sky. And I know your wages aren’t very good, either. Believe me, if I could have offered you more, I would have.”

Gazing intently at the surface of the tea, she mumbled, “You’re not an old fart.”

Edward threw his head back and laughed loudly. The joyous sound rang across the lonely hillside for several long moments. Then he said, “But you’re not denying any of the rest of it!”

Guess What? You Can Pre-Order Brit Boys with Toys Now! → ← Coming Together in Verse! Naughty Poetry for a Good Cause
© 2018 K D Grace