Lost in Love (in Space) by Catherine Peace (@lexcade)

It finally happened. You’ve fallen in love. He’s a great guy, she’s a great girl. You’ve got the whole universe at your feet.

Or so you think.

The universe is a dangerous place, especially for young love.

As Shadi and Uri learn in Gemini, there are a lot of dangers to face. From slavers to giant cat bounty hunters to having to come face-to-face with Shadi’s past, twists and turns threaten their relationship, and they’re not the only ones.

Tell me about your favorite science fiction couples! I know I left a LOT of them off this list! 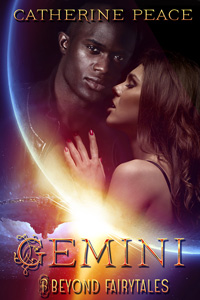 Being one of the Embassy’s glorified treasure-seekers has its perks…
Komandan Uriah Jacobs recovers ancient artifacts in exchange for more than just decent pay; he also receives guaranteed protection from his former owners, the nyx…until an emergency landing on a too-familiar colony brings him face-to-face with his past life and something more—a surprisingly priceless treasure in the form of a human woman.

A slave to the nyx since childhood…
Shadi spends her waking hours in the forge, dreaming of rescuing her brother with the help of a man she once worshipped like a father. A crashed ship on the colony becomes her only hope to escape. But before she can steal the ship, the pilot abducts her. They may be the same species, but will he help her find her Shilah?

Their attraction is undeniable…
Fighting it seems inconsequential as they evade the nyx’s bounty hunter and uncover a conspiracy that shines unwanted light on Shadi’s past and reveals the corruption in Uri’s beloved Embassy, placing their fledgling love in danger.

As the universe systematically falls apart, will Shadi and Uri’s newfound passion be enough to keep them alive?

Catherine Peace has been telling stories for as long as she could remember. She often blames two things for her forays into speculative fiction—Syfy (when it was SciFi) channel Sundays with her dad and The Island of Dr. Moreau by HG Wells. She graduated in 2008 from Northern Kentucky University with a degree in English and is still chasing the dream of being super rich and famous, mostly so she can sit around in her PJs all day and write stories. When not being a slave to the people in her head, she’s a slave to two adorable dogs.

Make sure to follow the whole tour—the more posts you visit throughout, the more chances you’ll get to enter the giveaway. The tour dates are here.