Life in the Land by Rebecca Cohen 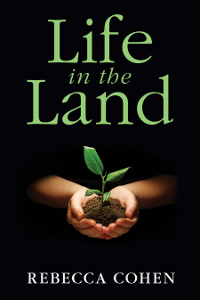 The magic of the Sawyer family’s extremely green thumbs comes straight from the land. But Bobby Sawyer’s expected superpowers don’t become a reality until he kisses his best friend, Mike Flint. That kiss moves the earth—literally.

When Bobby moves to the city, leaving Mike behind, Bobby keeps his green thumb nimble by working in a garden center and uses his superpowers to help fight crime. He’s on a mission when a bomb explodes, leaving him seriously injured, forcing him to return to the family farm—the source of his strength—to recuperate.

While attempting to recover, Bobby realizes Mike is still the love of his life. But Mike is leery: Bobby left him once before. What if all Bobby needs is one more magical kiss?

Short Excerpt from Life in the Land

The distant hum of a tractor’s engine and a few notes of birdsong were the only noises, and once again Bobby’s chest filled with heart-clenching disappointment. His eyes prickled, and he tried to hold back the tears, but he couldn’t. Large, wet tracks raced down his cheeks, and he leaned forward and rested his head and arms on his knees as he sobbed, pent-up disappointment and salty worries splashing into the soil.

Mike’s eyes were large and imploring, and Bobby was so miserable at his lack of progress that he just wanted something to hold on to. He leaned forward and tentatively brushed his lips to Mike’s in the gentlest of kisses. With a soft sigh, Mike kissed back in the same chaste way.

There was a tremor beneath him, a mild shake that made his whole body vibrate. They sprang apart, both staring wide-eyed at the dirt as they tried to work out what could be causing the disturbance.

Bobby’s jaw dropped. Before his eyes two of the large roots pulled themselves free of the ground, clods of soil falling from the delicate rootlets as they reached out to him.

With an undignified yelp, Bobby fell backward and scrambled away, but a soft rumble from the oak made him stop. It was reassurance, a call for calm, and he knew then everything was okay.

Rebecca Cohen is a Brit abroad. Having swapped the Thames for the Rhine, she has left London behind and now lives with her husband and baby son in Basel, Switzerland. She can often be found with a pen in one hand and a cup of Darjeeling in the other.