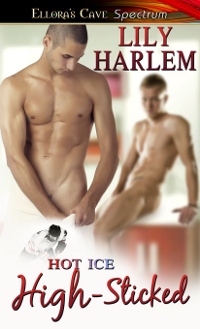 High-Sticked is Book #5 in Lily Harlem’s popular HOT ICE series – http://www.lilyharlem.com/hot-ice.html. All of these sexy hockey books can be enjoyed as stand-alone stories though if you read them in the order you’ll meet the hero of each next book as you go along. High-Sticked is the only M/M in the set and follows the story of Rangers player Todd Carty and professional photographer Matthew Foster. It’s hot, it’s spicy and is sure to hit the spot!

Dating Todd “Pretty” Carty was a trailblazing, headline-grabbing ride that shocked and divided a team, a sport and a nation. While controversy ruled, our feelings exploded and we couldn’t deny the desire that sizzled between us. Nothing, however, was easy outside the bedroom. Not when my world-class, fearless athlete wanted to shout from Everest that he was in love with another man.

But laying my heart on the line and having my picture dominating the papers was worth it. Everything about Todd turned me on. His bold hockey skills, his courageous attitude and the way he melted in my arms when I kissed him. I melted too, because he knew how to press my buttons, remind me of the man I used to be and take me to those places where ecstasy ruled.

The world might have trouble accepting us, but we’d committed to each other, mind, body and soul, and nothing could change that.

He looked so damn sexy standing next to the bed. Tall and broad but with a certain vulnerability about him that made me want to get all alpha and protect him. Though I knew that with those fine muscles of his and that sharp speed he needed no physical protection. But I couldn’t help myself. I just wanted to make things right for him—more than right, perfect.

I stepped up to him, my cock already swollen well past a semi. “Lift,” I said, gripping the base of his jersey.

He raised his arms and allowed me to peel it over his head. I dropped it to the floor where it landed silently.

His chest was beautiful. I’d seen it many times on the shoots, but now I didn’t need to disguise the lust or admiration in my eyes. Now I could feast on the sight of his dark little nipples that were small and permanently erect. Stroking my hand over his sternum, I circled each one in turn. Felt him tremble beneath my touch and heard his sigh when I brushed over the slightly pliant stalks.

He didn’t answer. I guess he’d heard it enough times before.

My cock was full-on hard now. But I was under control. I had to be, for both our sakes.

Todd wore jeans and a brown leather belt with a silver buckle. Luckily my hands were steadier than the tripping of my heart as I released the clasp and popped open the buttons on his pants.

He was hard too. I could see his cock straining forward. The outline of it was visible beneath the material and the swollen head butted the tip of the waistband.

My mouth watered and my hands tingled at the thought of holding, tasting, worshipping his cock for the first time.

But that wasn’t what I had planned. Not yet, anyway.

After loosening his pants, I pushed them down his legs. It took all my willpower to leave his white briefs in place and not expose his cock, but I did it. I couldn’t trust myself. If I saw him all hot and hard then I would devour him. In one go.

He stepped out of the jeans and slipped off his socks.

I tugged back the thick navy duvet. “Get in bed,” I said, my voice husky even to my own ears.

Without a word, he slid in and lay on his back, his arms bent behind his head, his cock tenting his briefs.

He watched me as I began to strip. When I wore only my boxers, I scooted in next to him.

A small shiver moved over his body.

I pulled the duvet so it covered both our shoulders then pressed the length of my body to the side of his. He wasn’t cold, he felt warm and solid and his leg hairs meshed with mine. “Turn this way,” I whispered. “Face me.”

He did as instructed, sliding one hand over my waist and tucking the other beneath his cheek. We were nose-to-nose.

“Remember when we first kissed on the sofa?” I asked against his lips.

“Well, that’s what we’re going to do again. Only this time there’ll be no ordering me to leave.”

“Don’t be so dramatic, you’re a sportsman not an actor.”

He laughed and as he opened his mouth I kissed him. Probed my tongue in and tangled it with his.

Instantly he kissed me back, a small moan filtering up from his throat and swirling out from between our lips. I ran my hand down his arm, onto his waist and stopped on his brief-covered hip. “Like this,” I murmured, “but closer.”

I tugged him toward me and he helped the movement by shuffling.

Our cocks came into alignment, only the barrier of our underwear separating them. “Matthew,” he gasped, gripping my hip the way I was his. “Fuck, you’re so hard.”

“Hard for you.” Damn, he felt good. His cock was as long as I’d suspected it would be from our brief introduction through jeans. It felt thick and wide too, a steel bar of burning rigidity.

“Feeling you against me makes my nuts so tight,” he groaned, shifting his hips so his shaft rubbed up mine on a long, concrete stroke.

I sucked in a breath of warm air. “Yeah, I know what you mean.” My balls were getting the familiar achy pressure that meant they’d be building to an explosion soon. “Lose these,” I said, plucking at the elastic waistband of his briefs.

As he pushed his down, I shoved at mine. My cock sprang free and a modicum of pressure lifted from the turgid shaft.

He gripped my hip again, tight.

I groaned and allowed the wondrous fist of desire to claim me, clamped my hand on his ass and squeezed our cocks firmly against each other.

“We will.” I began to shift my hips, a rhythmic grind that rubbed our cocks together, up and down. The shafts generated a scalding friction that heated with each and every movement.

He copied me, met me roll for roll, thrust for thrust. His fingers were pincerlike on my butt and his mouth covered mine.

We kissed, rubbed, slid into each other until our breaths were erratic and my heart pounded. My brain was sparking, firing from a hundred points all focused on Todd.

I wanted to reach down, fist our cocks in a clamping grip, but I didn’t. When I touched Todd’s cock for the first time I wanted to be calm and savor every moment. Right now I was on the brink of climax.

Blistering pressure raced up the center of my cock, the intensity almost dragging my balls with it. I couldn’t breathe, my stomach pinched into a tight knot and suddenly it was there. A beautiful moment of fulfillment. Warm heat burst from me, another shot followed, fizzing and popping onto my stomach in a gooey slap.

A sharp cry escaped Todd and I let the sound swirl within me. He too was coming. The sound of his orgasm was gloriously uninhibited, unlike earlier when he’d tried to suppress it.

Suddenly hot, I flicked the covers off. A cool waft of air caressed my sticky body and I sucked in much-needed oxygen.

“That was fucking amazing,” Todd gasped.

“That was just foreplay.”

“Fuck!” He grinned and a wild, happy flash seared across his eyes.

I laughed and flopped onto my back, staring at the shadow-strung ceiling. “Yeah, fuck! Foreplay to fucking.” 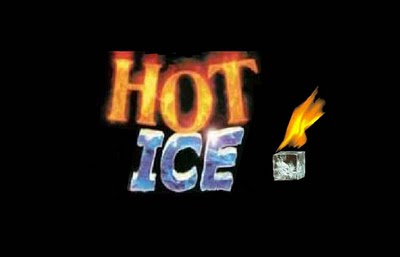 Her latest m/f novel, Breathe You In, is a super-sexy romance with a twist that will not only heat you up but stay with you for years to come.

Genderf*cking a Classic: Setting Traditional Sexuality on its Ear, and Loving It by Lula Lisbon → ← Ultimate Gift by Candy Knight
© 2018 K D Grace