The Arcanus Series initially started with 3 books. Then grew to five. With the addition of certain characters, the series jumped up to seven books. We’re only on book two now, but with this newest release, the next question is: what happens next?

I’m learning nothing ever happens as expected with this series, even as I carefully plan things out. A short story, Dune Whispers, has now become long enough to be an actual installment. As the story evolves, certain plot elements or ideas crop up that I add to my master plan. It’s been a fun challenge working with the series, and there’s definitely more down the road. Transcendence is the third official installation, and it’s already shaping up to be a fun ride.

What happens next is that the characters will continue to grow, and events will continue to unravel. The Obsidian Order’s goals will become clearer, relationships will deepen and yes, there will inevitably be a war. Beyond that I cannot say, but I hope to see you along for the ride.

This has been an exciting week for me. I’m grateful to everyone who has hosted me on this tour(my first one!), you all have been wonderful. I’ve enjoyed coming out and sharing my little world with you all. So long and thanks again! 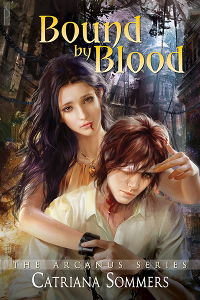 Rioran is a Kass’na’vah, king of a magical race, and his kingdom has been frozen by Olde Magick. Along with his brother Viron, the only known survivor of the attack, he travels across Meedia looking for leads to these mysterious practitioners of an eons-dead magic.

Their quest hits a snag when Rioran meets his lifemate, a dying seven-year-old vampire noble named Liari Varian. To save her life, he gives her his blood, binding himself to her. Now he’s stuck, physically incapable of leaving her, forced to watch from the sidelines until she comes of age and he can continue the search to free his people.

The world doesn’t remain idle while he waits, however. Tensions between races are building, war is brewing, and behind it all is a mysterious organization bent on eliminating all magic in the world.

CONTENT ADVISORIES: This title is erotica; it is not a romance title. This title contains both MF and MM sexual situations.

I am surrounded by incompetence.

Kien Varian reluctantly waved away the two voluptuous women sitting on either side of him. They flashed him pouty looks as he blew them apologetic kisses. Their hips swayed seductively as they quietly exited his social room.

The playful expression on his face morphed into an icy mask. Warm amber eyes, turned cold and predatory. Before him, a Mixed male kneeled on one of his fur rugs, one fist pressed firmly to the ground.

“Markus Lotros.” Crossing his legs, Kien raised a well-manicured hand to stroke his goatee thoughtfully. “Care to repeat those words?”

The messenger winced despite the pleasant tone. “I saw the heir leave her party moments ago… with Lord Larian. I had heard you wished not to be disturbed, but the young master instructed I come to you.”

Kien blinked and the stroking stopped. “Young master? Ah, you mean Eris.” Eris Lotros, heir to the strongest clan in the vampire community. A bit older than the birthday girl tonight by a few years, but his interest was obvious. A good match, if any were worthy of his little Lili.

“Yes, Lord Kien.” Markus’s head remained lowered out of respect and fear. Even being from another clan, there were few who could claim ignorance concerning Kien’s capricious behavior.

Fortunately, the vampire lord had other things on his mind. “Guardian?” he queried.

“Her whereabouts are unknown.”

Right. Of course Reila couldn’t be found. Had Alik listened to him and put a pureblood in charge of protecting Liari, Larian’s obvious ploy would have been less likely to succeed. The last of the Ancient’s resources and abilities had gone into ensuring the heir’s conception; a replacement would not be forthcoming.

“Be grateful your prince is an only child.” Kien finally stood from his plush red sofa, straightening his ruffled blouse. He blew out an exasperated sigh, fingers pinching the bridge of his nose in a futile attempt to thwart an oncoming headache. “Do you know where they were headed, Guardian? Stand up, man. I swear I won’t unleash my crazy on you.”

About the Author: I live in a beautiful hilly town in the state of Washington. I have a wonderful husband and two cute dogs who are huge parts of my life. I’ve been writing for as long as I can remember, and I cannot imagine my life without it. I’m a fantasy/romance author, but I love reading Sci-fi/Fantasy, high fantasy, romance, and I’ve recently delved more heavily into steampunk.

I’ve been a published author since 2011. When I’m not writing, I’m procrastinating on websites like tumblr and roleplaying forums, I’m out and about learning the local area, or I’m playing video games. I’ve won National Novel Writing Month for two consecutive years and hoping to make 2012 my third.

Where to find me:

Giveaway time! I’m giving away a free e-book copy of Bound by Blood via random drawing. To enter, all you have to do is leave a comment with your e-mail address and we’ll contact you if you’re a winner!