Guest Blog by Constance Munday, Author of The Ties That Bind

Spring is well and truly in the air and it always starts a whirl of writing and new projects. Perhaps it’s something to do with watching everything growing. Anyway here I am with another guest post and really enjoying the tour. At the moment I am deep in editorial on another book, but it’s always nice to take a break to talk to everyone and I’m getting used to it now, although I still think I am a bit of a blog novice and wonder if I’ll ever put out something half as witty and polished as my fellow writers. I am so envious of every one who is good at this, I think it takes a certain natural talent to make a good blogger.

I very often get asked about the latest book I am reading. I am a voracious reader but it is a sad fact that writing so much, means I read a little bit less than I used to. I still try to get through a book a week if I can though, and I still read anything interesting that comes my way. To me there is no good or bad book because you learn something new from each one and it’s always an interesting exercise to explore the ideas, study style and maybe learn a gem of wisdom.

I am delighted that ‘The Ties that Bind’ is proving such a favourite with all of you out there. Maybe it is because I enjoyed writing it and I am a firm believer that if you enjoy what you do it shines through in some way. From feedback, folk are telling me they like the characters Penny and Nicholas, which is great. I wanted Penny to be that likeable heroine we could all identify with. Giving her doubts and flaws made her approachable. Nicholas the male lead, is a bit more complex. In the beginning he is not meant to be that pleasant since he doesn’t give enough away for you to be able to read him very well. But I think as you get to know him and see how his mysterious side hides one or two surprises you will like him immensely, or you will by the very end. Penny and Nicholas go through quiet a few dramas in order to be together, with Penny unveiling some hidden secrets about herself in the process. A word of warning, Nicholas is a sexy guy and I adore him, but he is not your archetypal young stud. We don’t always meet those in real life do we? Anyway, here is a little taster for you to enjoy. Thanks so much for reading my blog today and I hope you’ll now begin to follow my news on the Constance Munday wordpress blog. Details below. 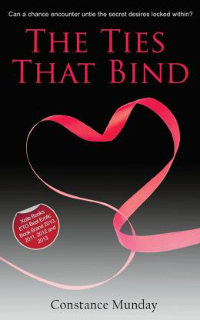 Nicholas slipped the masque over my eyes and I quivered at the feel of his hand on my arm. I hadn’t realised how much I liked being blindfolded. It made me wake up to sensations I’d never had. I turned my face up, inviting a kiss and got one. One of Nicholas’s specials. He was such a great kisser, I wondered how he’d got so good. He feathered my lips gently, teasing them with his tongue. Then he dived in aggressively, pushing my head back and plundering me, his tongue roaming over my mouth before capturing my own and sucking on it. I was surprised how quickly I’d taken to this tongue jousting, as I gave as good as I got; tasting his lips, wanting more. I could kiss Nicholas forever.

I lay on the back car seat in a fever of anticipation. By the time we stopped, I could hardly stand up I was shaking so much. Nicholas had to help me inside and up the stairs. He sat me on the bed as pulses of deliciousness raced through me.

I’m going to leave the masque off when we play today.’

‘Why.’ This was the third occasion we’d used it and I rather liked the mask. It gave me another identity and carte blanche to misbehave.

‘Because, you’re beginning to hide behind it, Penny. It’s all very well playing from time to time. But to advance properly, to be seduced properly, I think you ought to see what’s going on. It’s a turn on seeing someone’s expressions and reactions.’

‘The masters’ I’ve read about wouldn’t take off a masque this early, it spoils the suspense.’ I didn’t want to look too eager, but the truth of the matter was I didn’t actually mind about the masque because I wanted to see him. What I’d felt blindfolded, had been great and terrifically exciting, but to appreciate the subtle nuances of emotion on his face, wow!

He was sitting close, so close, I could feel his warm breath on my cheek.

‘I didn’t say I was a bondage expert did I, this is not simply about fun and restraint, it’s about us and our emotions. I certainly don’t spend my nights down fetish clubs if that’s what you’re thinking. I’m just a regular guy. Anyway what’s this Penny? Do you have a more salacious appetite than I do? Do you just want kink and not the whole seduction package?’

Silently I grappled with this conundrum as my mind began to wander. I wonder what you do on the evenings when you’re not with me, Nicholas Frisk? I speculated. Unfairly I was having the boyfriend, girlfriend feelings I knew I didn’t have a right to, as I began to wonder if there was another Penny, or maybe a Jayne or Mary hidden away in a suburban house somewhere waiting for Nicholas to get home. There might even be – God forbid – a clutch of golden-haired baby Nicholas’s tumbling at his feet. I knew if I asked him he’d only niftily dodge the bullet like he usually did. What did he tell the secret woman? “Babes,” this as he ran his hands through his hair and kissed her like he did me. “I’m so sorry they’re heaping work on me at the office.”

‘You have that lost a pound and found a penny look again.’ He gently pinched my cheek. ‘Come along Penny. Time is short.’

Nicholas removed the masque and I saw he was smiling at me tenderly. ‘Good girl.’ He kissed me.

Blurb for ‘The Ties That Bind.’

Can a chance encounter untie the secret desires locked within?

Penny’s your average voluptuous girl next door. Still a virgin, she’s settled for dull accountant Laurence. However, Penny is about to have her Shades of Grey moment. Saved from an accident by enigmatic stranger Nicholas, she yields to temptation and agrees to his daring proposal. Can Nicholas prove to her in the space of the few short weeks before her wedding, that she’s made a mistake?

Penny’s preconceived notions of sex are challenged, as she now submits to desire and unwittingly falls truly in love with a man who loves her purely for herself.

But is it too late? Can she sever the ties that bind her to Laurence and is she strong enough to become bound by ties a million times more intriguing? In essence, is Penny brave enough to be the woman she knows she is inside as a game of hearts becomes self-fulfilment on a scale she never imagined possible?

Buy ‘The Ties that Bind on Amazon.co.uk, Amazon.com, Xcitebooks.com and all good platforms in both Kindle, epub and paperback. 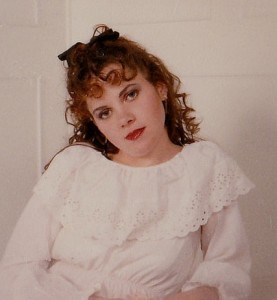 Constance is nearly always to be found with a pencil in her hand making notes for a new story. She has led a varied life and done many jobs from cup washer, lecturer to new age healer but has always written since she was a child. A major health scare recently though, made her see life differently, and after years as a part-time writer, she turned full-time, because as she says – life is too short not to do what you love. She has literally climbed a mountain and made many sacrifices to pen her novels and now builds on a fund of wonderful encounters with intriguing people, plus her imagination, to write stories with strong characters and determined and adventurous women.

Constance loves listening to snatched conversations, which often give her a seed to start a story; taking walks, revelling in the mysteries of life and baking and dancing, when she isn’t tapping away at her latest novel, of course.

She loves her fans and their comments, so invites you to please drop a line and if you have a second, pen a review.