Cover Reveal—‘Mistress Of The Air’ by S. Nano

Lady Sally Rudston-Chichester owns a brass mine in Zanzibar, a Lapsang Souchong tea plantation in China, a rubber farm in Malaysia, trunk loads of corsetry and the country’s largest collection of antique whips.

Embracing the spirit of the age of aviation, she embarks on a series of adventures on her airship, ‘The Corseted Domme’, with her transvestite maid, Victoria, her airship pilot, Captain Wyndham and her automaton sex-doll, Borghild.

A select group of submissive gentlemen, consisting of a duke, bishop, lawyer and banker, is invited to join Lady Sally so she can try out her dastardly, electric and steam-powered devices on them.

She spanks, whips, and punishes her way across the Empires of Europe, dropping off to visit her aristocratic relatives and friends for afternoon tea.

But Lady Sally’s journey is not uneventful. War is threatening to break out and the Ministry of Aviation want to commandeer her airship for the war effort. And when ‘The Corseted Domme’ has a crash landing, Lady Sally realises there is a stowaway on board intent on sabotaging her airship. 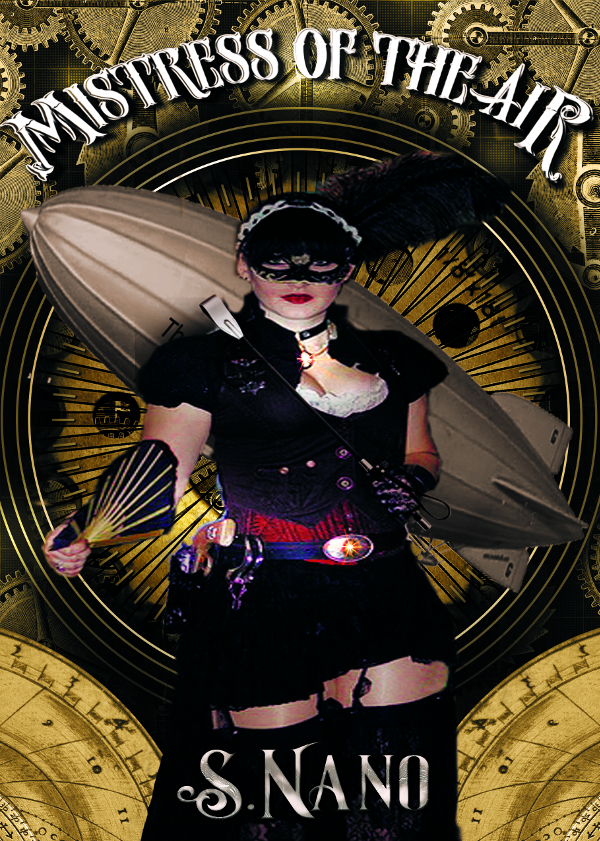 “Jolly bad luck on the final race, Wyndham. It was a daring move and deserving of greater reward.”

The captain’s face lit up at the compliment. He looked up but couldn’t help but be distracted by the sight of Lady’s Sally’s breasts. Her dress was cut daringly low, and the magnificent orbs of white flesh were pushed up enticingly by her corset and the cut of her gown.

And then she started talking. If Wyndham was embarrassed about what to say to her, he didn’t need to worry. She commanded the conversation and Wyndham listened, bewitched and mesmerised at the vision she laid before him. There was no escape for him. He was pinned into the corner by Lady Sally’s heaving breasts with no escape. He tried to concentrate on what she was saying, conscious of the treatment meted out on Monsieur Le Blon, all the time urging himself to focus on her face not her chest, but it was an enormous effort of will when they were practically thrust under his nose.

She spoke of her airship. She described how vast it was going to be, how fast, how powerful, and how high it would fly. She described how sumptuously it would be fitted out. She extolled the virtues of her ocean liner of the air. Wyndham nodded enthusiastically as her breasts swelled and subsided with every excited explication of her venture. She enthused about her designers and engineers who were working on it, of the technical challenges they faced and how they had overcome them. Wyndham stood trapped in the corner of the ballroom like a frightened rabbit in headlights all the time trying to distract himself from the sight of Lady Sally’s enormous décolletage as it heaved up and down in front of his eyes.

Wyndham’s ears pricked up at those words but he only had the slightest moment to interject with a nervous, “oh really,” before the enormous breasts backed him even further into the corner. Lady Sally continued by praising his aviation skills and the daring manoeuvres she’d witnessed at the flying meeting. Wyndham flushed with pride. She went on, much to the captain’s delight, to say how those French aviators were all show and no guts, and she needed somebody who would take risks for her, to serve her loyally and selflessly. Finally, she wound up her diatribe and came directly to the point.

“Now Captain. I pride myself on my instincts and judgement of character. You see, the matter is I need an airship pilot. I need someone who can share my enthusiasm for air flight and is a skilled aviator. I believe you are my man Wyndham.”

Lady Sally continued extolling the excitement of the new age, how she was going to take her airship on a grand tour across Europe and how he, Wyndham, would be her pilot.

Finally, she concluded, “So that’s all settled then, Captain Wyndham. I can assure you the financial rewards will be considerable. It’s good to have you on board. I’m sure we will share many adventures together. You can report to my airship station at Howden in Yorkshire. My maid, Victoria, will give you all the details.”

With one dismissive wave of a lace-gloved hand she breezed off, leaving the hapless Wyndham gaping in astonishment. He had been swept away by her charisma. He had barely uttered a word. At no point had he agreed to the venture yet he knew in his gut he would accept the challenge. He felt strangely compelled to help Lady Sally fulfil her vision of travel in the largest and fastest dirigible ever to be built.