Drifting aimlessly through the romance community on Twitter and the like I sometimes see references (usually scathing) to ‘insta-love’ but I prefer the French term coup de foudre, which amounts to the same thing but in a sexier, Frencher way.

There seems to be a view that it’s unlikely for love to strike in that kind of way – instantly and forever – and I have some sympathy with that view. You can’t look into a stranger’s eyes and know that they are the one who will be with you till death do you part. You can’t know that you won’t ever grow apart, or drive the love away from each other, or meet somebody else after the shine has worn off.

All the same, it can happen and sometimes it does. Perhaps disproportionately in romance novels, but we aren’t dealing with kitchen sink drama here. (Which I just mistyped as kitchen kink, hmm, interesting…) And it happens to Jo when she meets Emmett.

When this kind of immediate, overwhelming attraction strikes, followed rapidly by emotional entanglement, it says a lot about the characters involved. Why are they such catnip to each other? They push each other’s buttons without even trying to, because there is an affinity between them that demands to be explored.

In Jo’s case, she is drifting and longs to drop anchor in a safe harbour. In Emmett’s, he is unconsciously looking for his ‘other half’, to prove to himself that he isn’t a complete misfit. Brought together at the right time and place, they create their own thunderstorm of desire.

Here’s an excerpt from their first meeting:

“Come on, mermaid,” said Emmett, unlinking from me and bending to remove his shoes and socks. “Come into your element with me.”

“Oh my God, are you serious?” I said, half-laughing as he took a step down towards the water’s edge, tiny wavelets lapping against the fading yellow-painted shore.

“Come on,” he repeated, in the water now, turning around to gesture me forwards. “It’s not cold.”

I dithered for a moment, but I was committed now, and still aching for Emmett’s approval, so I kicked off my high-heeled courts and basked in the pleasure of their loss, standing on the sun-warmed concrete slope and stretching out my toes.

Emmett had rolled his trousers up to the knee and was wading through the dark waters, throwing back his head to get the last good rays of the sun on to his sun-starved face.

I pattered down the hill after him, wincing and squealing as the water washed around my feet.

He laughed and held out his hands.

The temptation to run straight back out and shiver on the bank would ordinarily have won this battle, but Emmett’s force was stronger and I found myself impelled towards him, the water climbing ticklishly up my ankles and beyond while I cut a path through draggling pondweed and floating cigarette butts.

“Why did you say I lived on a houseboat?”

I drew near enough for him to seize my hands and pull me in close. Our shirt buttons clashed and cotton met cotton, the warmth and promise inside pressing tight.

“I don’t know. It just popped into my head.”

“Your first thought was about where I lived, and you placed me in your own element – water.” He bent and whispered the words in my ear. “You wanted me, little mermaid. Don’t try and tell me otherwise.”

He hushed my mouth with a kiss, sending the words back down inside me. I stood in the tight clasp of his arms and did what I never did. I opened up to him. I parted my lips and let him inside.

Hazily I wondered Is this me? Josephine Price, so hesitant, so reticent, standing here in a strange man’s arms, knee deep in brackish boating lake water, kissing down the sun.

We stood there, lip to lip, tongue against tongue, hands sliding under jackets in heated exploration, until a gust of chill rippled the water around our legs. My cheeks and chin were sticky and sore with stubble burn; my lips were swollen and chapping. But I still wanted more.

“Actually,” he said, pressing his forehead to mine, “I do live on a houseboat.” 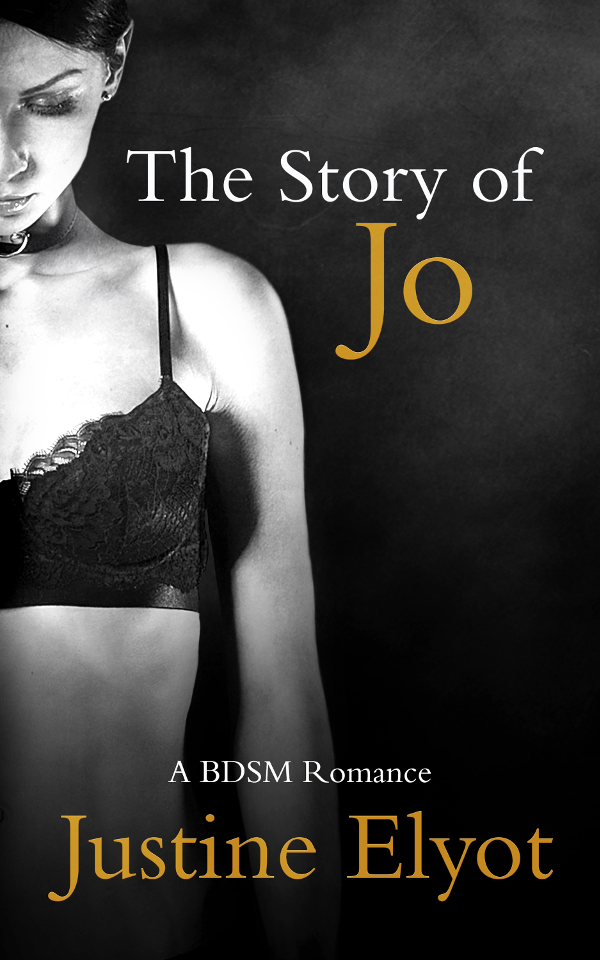 If you want read more, the book is available now from:

Make sure to follow the whole tour—the more posts you visit throughout, the more chances you’ll get to enter the giveaway. The tour dates are here: http://writermarketing.co.uk/prpromotion/blog-tours/currently-on-tour/justine-elyot-3/

Enter for your chance to win a £20/$20 Amazon gift card and a paperback copy of The Story of Jo.