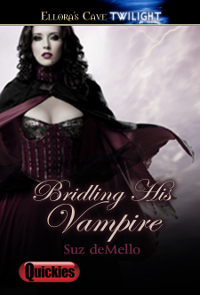 Bridling His Vampire is a short story in the bestselling Highland Vampire series from Ellora’s Cave.

The events in the story took place in 1766, between Desire in Tartan (1759) and Rakes in Tartan (1816). It’s better enjoyed in the context of the series; however, it’s written as a stand-alone.

What’s it about, you ask?

Edgar, Laird MacReiver, has never regretted his decision to wed Isobel, daughter of Clan Kilburn’s laird, until she bites his tongue and drinks his blood. Still, he’s determined to bridle the wild child of the infamous vampire clan by any means necessary, including bondage and discipline.

But are some women impossible to tame?

Bondage and discipline? So it must be sexy, right? SHOW ME.

Edgar’s lips caressed hers and her mind emptied of everything except this new experience. Isobel wanted to remember everything about her first kiss: the strength of his arms, the warmth of his lips followed by the wetness of his tongue as it slid slyly into her mouth.

His flavor was distinctive, a spice like nothing she’d tasted before, a toothsome relish composed of spring water, mint and honey. The scent of the forest mingled with his aroma, a fragrance that melded good male sweat with an underlying freshness that reminded her of the summer sun glittering on the sea.

His hand trailed down her back to curve over her bottom. He squeezed, and the tingling heat of passion spread from his broad warm palm to encompass all of her. A purr rose in her throat. She slid her arms beneath his and held onto his shoulders from behind.

She pulled him in tight, wanting nothing but this kiss to go on and on forever. Life had become so simple. Their mouths touching, their hands exploring, their bodies pressed against each other were everything. Nothing else mattered.

She sucked on his tongue but still wanted more. She nipped and then, tasting a new flavor, licked the tip. Was it his blood? She didnae care. He was delicious.

She sucked harder. Yes, that was his blood seeping over her tongue from the tiny bite, and it was intoxicating… He was intoxicating. He groaned and his grip tightened. She became aware that his muscular body had hardened against hers.

That she’d taken his blood had stirred him. A bolt of pure lust snapped through her. He was aroused by her need and that, in turn, inflamed her. His maleness thrust blindly, seeking her warmth and heat. She pressed herself against him not only with desire but also with a sense of wonderment. She had not known how good he’d feel pressed against her.

His hands shifted, roamed, explored… He took her wrists and drew them down to the small of her back.

He pulled away but she couldn’t reach for him to bring him back. He gripped her shoulders and looked into her eyes with a peculiar intensity. His blond hair swung loose, and she realized what he’d done.

He’d bound her hands behind her back with his leather hair tie.

“What…why did ye do that?” She tried to tug her wrists apart, but he’d tethered them firmly.

“To stop you from running away from me.” His panting breaths stilled, became controlled. He was always so controlled. She hated that.

He wanted to control her, and she hated that even more. “I don’t run from ye. I’m not a’feared of ye!”

“Isobel, you’ve been running from me for five years.” He began to unbutton her blouse.

“Oh, I don’t think so.” He slipped a hand into her blouse. Her corset pressed her tightly, supporting her breasts, and he pushed his fingers down into the valley between the mounds. Withdrawing his hand, he released one, cupping it, flicking the nipple, watching it tighten.

He’d never touched her breast before. No man had. It felt good, but it was wrong. She raised a knee and tried to jam it into his cods. He twisted, and she struck air instead. Off balance, she teetered.

Want to know what happens next? Buy the short story here: 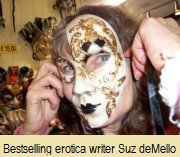 About the author:
Best-selling, award-winning author Suz deMello, a.k.a Sue Swift, has written seventeen romance novels in several subgenres, including erotica, comedy, historical, paranormal, mystery and suspense, plus a number of short stories and non-fiction articles on writing. A freelance editor, she’s worked for Total-E-Bound, Liquid Silver Books and Ai Press, where she is currently Managing Editor. She also takes private clients.

Her books have been favorably reviewed in Publishers Weekly, Kirkus and Booklist, won a contest or two, attained the finals of the RITA and hit several bestseller lists.

A former trial attorney, her passion is world travel. She’s left the US over a dozen times, including lengthy stints working overseas. She’s now writing a vampire tale and planning her next trip.

–Find her books at http://www.suzdemello.com

–For editing services, email her at suzswift@yahoo.com

–Her current blog is http://www.fearlessfastpacedfiction.com