Grace Marshall Takes a Tour with An Executive Decision 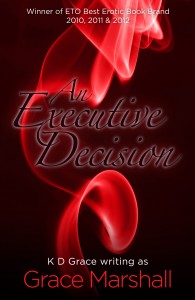 My counterpart, Grace Marshall, is on a week-long blog tour with An Executive Decision, the first novel of her Executive Decisions Trilogy of hot romance. Starting Monday, 19th November, you’ll find Grace at these wonderful sites talking about Dee and Ellis and their oh so hot Executive Sex Clause.