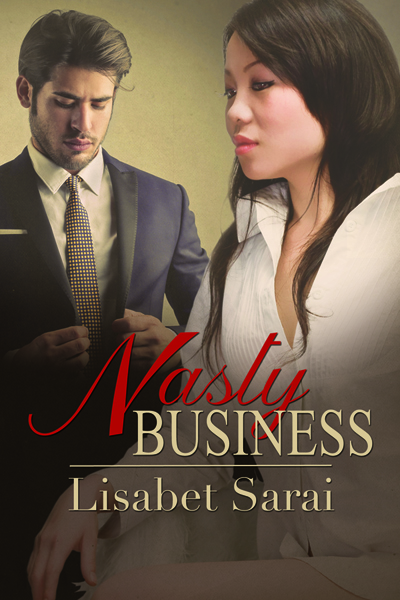 All’s fair in lust and business

Ruby Maxwell Chen, lovely and ruthless CEO of a huge British business empire, is used to getting her way. When she encounters the strangely charismatic American entrepreneur Rick Martell, though, she wonders if she hasn’t finally met her match.

From the trendy clubs of London to the Hollywood Hills, Ruby and Rick compete for ownership of a strategic factory in Malaysia. Neither has any qualms about using sexual wiles to smooth the path to success. Neither anticipates that their mutual attraction will turn into something far more intense and difficult to control.

As their struggle for dominance escalates, they draw their employees and associates into their outrageous power games. The stakes could scarcely be higher, as Ruby and Rick play for the ultimate prize: a night of total physical surrender.

Bravo.” A soft, melodious male voice, and then the sound of applause. “I’m extremely impressed.”

I pull myself abruptly upright. Did someone dare to watch me and my medieval servitor?

I have just been finger-fucked to exhaustion, yet my first reaction is a wave of total, incomprehensible lust. Incomprehensible because the man who stands between the parted curtains is not at all my type. He is short and wiry. His hair is scraggly and a bit too long around his ears, and he has a dreadful drooping black mustache. He wears nondescript jeans and a khaki shirt.

Somehow, though, he radiates sexuality. His aura is palpable, the air thick and sticky as syrup. He fixes me with his intense, dark eyes and grins. I feel like I am melting. I want to spread my legs wider, desperately offer my swelling sex for him to use as he will.

I struggle with my impulses, close my legs decisively and try to stare him down. “I gather you were spying on me and my admirer.”

“Indeed. A most entertaining and instructive tableau.” He enters the balcony-space, letting the curtains close behind him, and picks up the flogger. The knotted thongs dangle an inch above my cleavage. “You seem to be quite an expert in the arts of discipline.”

“Hardly,” I say, taking the whip from him, trying to take control of the interaction. “I am just beginning to explore the possibilities. But,” I say, my eyes narrowing to watch his reaction, “I do find myself quite sensitive to my partners’ desires to yield to my power.”

“I could see that. You knew what he wanted, and you gave it to him.” He pauses and searches my face. “But, do you know what I want?”

Truly, I have no idea. He seems fascinated by the flogger, but I sense only a hint of submission in him, a playful curiosity totally different from the aching need of my recent conquest.

His eyes play over my body in a leisurely fashion, appreciative, it seems, but not urgent. Surreptitiously, I glance at his fly: an appealing bulk there, but no indication of arousal.

I, on the other hand, am hornier than I have been in weeks. Maybe months. Or ever. My clit throbs like a sore tooth. I lean forward so that my breasts part invitingly, and lick my painted lips.

“Tell me what you want,” I purr. “I’m feeling generous tonight, and just might grant your request.

He leans toward me in answer, and grasps my chin. Strange electricity flows from his touch. My breasts ache. My cunt is on fire.

“I want you to take me home with you,” he says with a cryptic smile. And then he kisses me.

I am not sentimental. I am not romantic, susceptible, easily mastered. But I swear, I could drown in this kiss.

His lips are smooth and full, his tongue demanding. He tastes of peppermint, and behind that, an aromatic trace of pipe tobacco. I smell his cologne, something clean, woodsy, Scandinavian.

I do not want to give in, and yet I do. I return his kiss, open my mouth wide to his probing. He senses my partial surrender, and presses his advantage. He has slipped his hand inside my vest, now, and is pinching my nipple hard.

I love it. I am awash with lust. I am dying for him to take me. My sex is liquid, spilling over. My scent rises in the velvet-draped space. I know that I cannot hide my desire, but still I try.

“You seem most enthusiastic,” I say, my voice surprisingly steady. “But why should I allow you into my personal space?”

“Because you want to,” he says, deftly extricating my breast from its leather casing and planting a kiss on its tip. “And because you think that you will have more control on your home territory. As an interloper, I will necessarily be at a disadvantage.”

He’s right. Many women would feel vulnerable, bringing a stranger into their home, but I’m more confident on my own turf than in some unfamiliar locale. I am astonished at his perspicacity. Who is this man? He appears so ordinary and yet there is both physical attraction, and psychological intrigue.