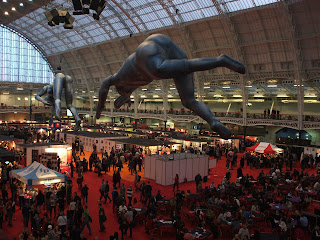 I’m just back from Erotica 2010 with my book-signing hand well-exercised and my throat still raw from talking writing and books and kink. This was my first Erotica, and I don’t intend to make it my last.

I hooked up with the fabulous Kay Jaybee (who came from faraway places to join the party) at Earl’s Court tube station after we’d both run the gauntlet from flat tyres to delays on trains to tube closures due to weekend engineering works. We dropped our things at our hotel, had lunch then headed over to Olympia and the main event.

We just had time for a quick look around before the book signing. A quick look around was no easy task in such a large venue with such a variety of exhibits. Our recci took in everything from latex to corsets to photography, from art to jewelry to sex toys, from whips to dungeon kit to full body painting. After writing The Initiation of Ms Holly’s hot biker bloke, Morgan, I was especially keen on watching an artist clothing her lovely colleague in a freshly painted coat of leopard spots. There was something for everyone. If the booths and displays weren’t enough, there were on-going live performances headlined by Dita VonTeese. 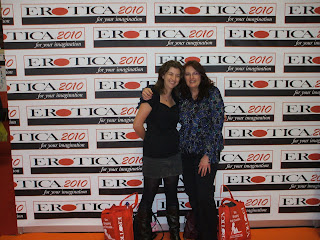 The Xcite Books Booth was near one of the main corridors between exhibits, the perfect place to view the parade of people in latex and corsets, collars and leather, leashes and shoes! Wow, the shoes! There were stilettos and platforms and bum-high boots and biker boots in every colour and style imaginable.

The Xcite booth was well-personed with its fearless leader, Hazel Cushion at the helm. Miranda Forbes was there, as always, doing the work of two or three people. Two lovely young women handed out flyers for free audio downloads, or as Hazel calls them, eargasms. And the book racks and displays practically writhed with a constant influx of stilletoed, booted, corseted, latexed folk, as well as a good number of people dressed up like average Brits out for a day of fun and entertainment. The atmosphere was laid back and festive.

I settled in at a signing table decked in an Xcite table cloth and stacked artfully with gorgeous golden copies of The Initiation of Ms Holly. Once I’d made myself comfy, I retrieved my special blue book signing pen from the depths of my bag and did a few warm-up stretches to prepare my fingers for my first ever official book signing event. 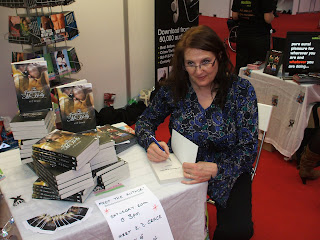 And sign I did! I lost count fairly early on, enjoying the banter about costumes and sexy Christmas gifts, about what inspired me to write Holly and what people were enjoying most at Erotica. In the midst of it all, Kay, who had gone exploring, brought back periodic reports of her adventures and inspiration amid the exhibits.

Back from a short break, Hazel brought me an icy beer to quench my raging thirst from all that hard signing and talk, and one of the lovely Eargasm Chix thoughtfully brought both Kay and me a gourmet cookies to sustain us.

Once the signing was done and my energy was restored by alcohol and sugar, there was more exploring to do. Then it was time to watch Dita Von Teese. We watched the show from the mezzanine of the food court ensconced next to a lovely lady with a huge raven tattoo peeking up over the back of her silver corset.

After a day full of obstacles, eye-candy, book-signing, and sensory overload, we ended up back at the hotel talking writing and erotica over a bottle of Chilean red. The perfect end to the perfect day.

As I sit here in the quiet of my lounge, bleary-eyed from lack of sleep and still trying to take in the fullness of the day, I’m thinking about Hazel, who spent another long day today working the Xcite Booth at Erotica. Of course the way the books were flying off the racks, she may have run out of stock and had to close up shop early. Thanks, Hazel and Mirandas and Eargasm Chix for doing such a fabulous job! You a 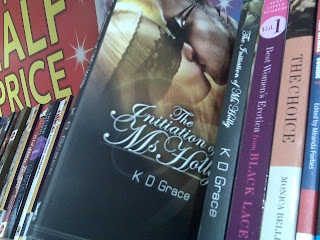 On a final note, as I was waiting to catch my train back home, I decided to check out the WH Smiths, and to my delight, I found Holly has arrived at Waterloo Station too, and she’s all ready to travel!
It was a really good weekend!