Happy Friday everyone!  Friday means it’s time for another episode of Dragon Ascending. Last week Mac, Manning and Fury interrogated the crew of the rescued ship concerning the fate of the mysterious woman. This week, as the crew reveals the facts about our missing woman, Fury decides to give the ship and crew a little journey they hadn’t anticipated. I hope you’re enjoying Dragon Ascending, the sequel to Piloting Fury, as much as I’m enjoying sharing it with you. As always, I love it when you share my work with your reading friends, so feel free. In the meantime, enjoy!

“Did you kill her?” Manning asked.

“No! No, we didn’t, we wouldn’t,” he whined. “We put her down exactly where she asked us to. She was roughed up a bit, but,” he tried to chuckle, “some women like it rough.”

“Lie to me, and I will absolutely see that you get the shackle,” Mac growled. “There was way too much blood for her to have only been a little bit roughed up.”

“We left her by the big salvage yard in the Sea of Death, just like she asked, and she walked away under her own power. I swear it. Give me truth drug, hell give us all truth drug, just please don’t shackle us.”

“What did she want there?” Fury asked, and all three men looked around again to see who spoke.

“We don’t know,” the engineer said. “All we know is that she was systematically searching the salvage yards on this rock. She said something about archeology or anthropology, something like that, but she didn’t look much like any science type I ever saw. Scrawny thing. Dirty. But then hell everyone is out here where water’s worth more than Triax.”

“She never told us much about whatever it was she was studying,” the captain spoke again, holding his broken nose as it bled into his hand. “She paid us in trade when she hitched the ride. She got her hand on some pretty good shit from scavenging through the salvage yards. Gave us a lot better deal than any of the traders would have.” The med-bot came back in to treat his nose, and he gave a sharp curse as it was set.

Fury and his crew knew exactly why there might be a de-mole shield around the perimeter. Mac returned her attention to what the man was saying. 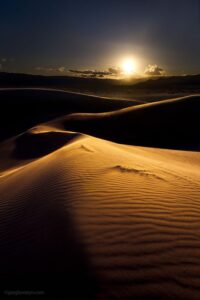 “We didn’t fancy going up against it,” said the engineer.” Ain’t nothing worth risking demolecularization over. And we reckoned she’d just sit around on her ass and wait for us to come back.”

“But you thought she’d be just fine waiting it out for three days in a dangerous place like that,” Manning said.

“Well she managed last time she was there, so there must have been a cave or something.” He shrugged, “Or she lied about being there before. Maybe the de-mole perimeter wasn’t there then, hell I don’t know. Alls I know is that she said pick her up in three days.”

“And would you?” Mac shoved into the man’s personal space almost nose to nose, the smell nearly making her eyes water. “Would you have come back for her after what you did to her?”

“Of course we would,” the captain said as the med-bot backed off finished with its work. The man did his best to looked shocked at her insinuations, but Mac didn’t need Fury to tell her that their plan was iffy at best. “Ain’t no one could survive that deep in the Taklaman to walk to the nearest outpost. We had the coordinates. Check our computer. The flight was already programmed in. Then we figured, if she did find a way in, we’d get her to share that information with us.” A blush rose to his cheeks and then the color vanished as he realized what he had just said. Then he shrugged. “Not like she had a choice but to come back with us.”

“Look lady,” the engineer huffed out a frustrated breath, “I mean agent, we got a little drunk, that’s all. And we got rowdier than we intended with her. We never meant to hurt her.”

“‘Tran them aboard their ship and get them out of my sight,” Mac said. “I don’t care where the fuck you send them, just make it a long way from me.” She barely heard the eruption of their protests before they vanished back onto their own ship and it vanished nearly as fast, with a little help from Fury. She made it into the elevator and then she collapsed onto the floor, dropping her head between her knees shaking like she would fall apart. Manning settled next to her on the floor, not touching her at first, knowing that she felt like she might puke her guts. Saying what she’d said had cost her, had brought back memories of being shackled. She knew it had for him as well, and that he was more than likely as nauseated as she was. She felt Fury’s concerned support on the other side. She was not an indentured anymore, and neither was Manning. They were family, Fury’s family, and she knew they had work, important work to do. She took a deep breath and blinked back tears, then soaked in the comfort and empathy of her two men until the shakes and the nausea eased.

Then, with their help, she gained her feet and they got off on the flight deck where they settled her in her chair just as the screen revealed the last view of the vanishing ship from long-range scanners. It was only then that she was calm enough to ask what no one had said, recalling vividly Griffin, in his infancy, ‘tranning Abriad Fallon into space for all that he had done to his son, to her, to so many people. “Fury, what did you do to them?” She finally asked.

“They are back on their ship, just as you requested. I have reprogrammed its computer with new coordinates for their very long journey. They will find themselves going much faster than they’d planned. Oh they shall not starve. I have seen to their basic needs but only just barely.”

“Beyond the Rift,” Manning said with a little shiver.

They both got the sense that Fury was nodding. “As for their desire to abuse those weaker than they are, well, I have given them my own version of the shackle in their rations. They will not have much interest in sex and certainly not such abuse for a very long time, not unless they take a great deal of pleasure in violent vomiting fits.”

This time they both shivered, and Fury simply said. “Now we must see if we may locate this woman. I have taken the liberty of ‘tranning her pack onboard, but there is little in it that if of assistance, I am afraid. Nevertheless, I fear our woman’s situation must surely be urgent. Then perhaps once we have seen to her immediate needs we shall discover what is so important about the Sea of Death.”

They both knew exactly what Fury believed was so important down there. And if one of his missing siblings was in hiding way out here, then whichever one it was, they had most definitely lost their way.