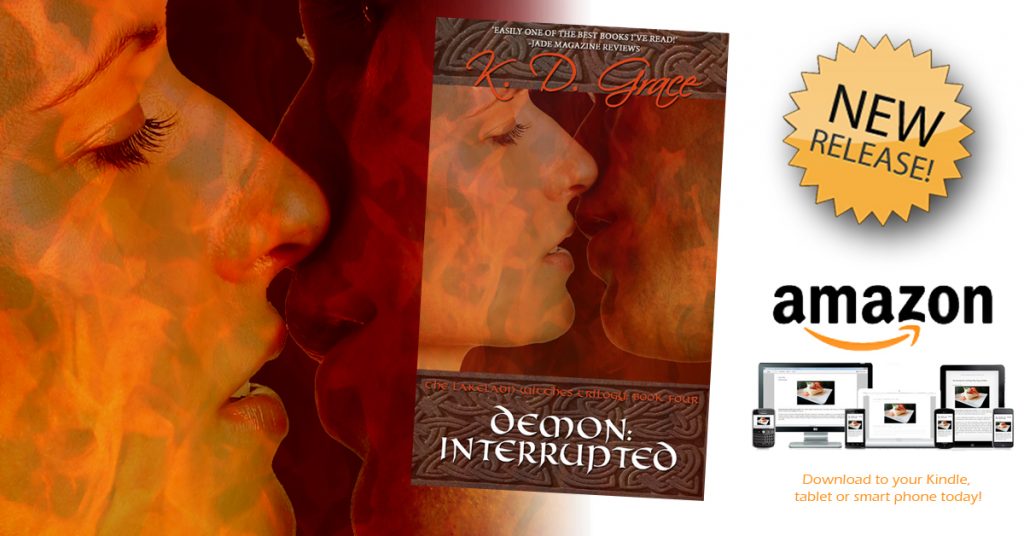 I know I promised part two of Mr. Sands today, but I just have to take time out to crow about my new release! That’s right! Demon Interrupted, the continuation of the Lakeland Witches saga, is now a unified novel you can buy on Amazon!

Sometimes a secondary character in a novel I’m writing intrigues me so much that even  after the novel is finished, I can’t stop thinking about him or her. Most of you know that’s what happened with Wade Crittenden in the Executive Decisions series. He was just too intriguing not to revisit. The same is true with Ferris Ryder from the Lakeland Witches trilogy. From the moment he appeared on the scene in the second Lakeland book, Riding the Ether, capable of making himself completely unnoticed, while at the same time possessing amazing skills he has no idea how he got, I wanted to know what his story was, so I decided to do my first ever online serial, with a new episode of Ferris’ story coming out on my blog every three weeks, timed to finish on Halloween, as any good paranormal series would. It was my first aerial, but by no means my last.

And now, at last, Ferris and Elaine’s story will be coming out altogether, expanded and enhanced into a novel for Xcite Books. What started out as a serial and a novella is now the 4th book in the Lakeland Witches trilogy, and I can’t tell you how pleased I am and excited to make Ferris’ story available to everyone in eBook format.

Ferris Ryder has a choice to make. He can reclaim the past, which he now consciously keeps from his memories or he can let all that he fears to remember destroy the present and the Elemental Coven he has come to love. Has the mysterious Elaine come into his life to be his guiding angel or will she tear his world, and that of his coven family, apart? 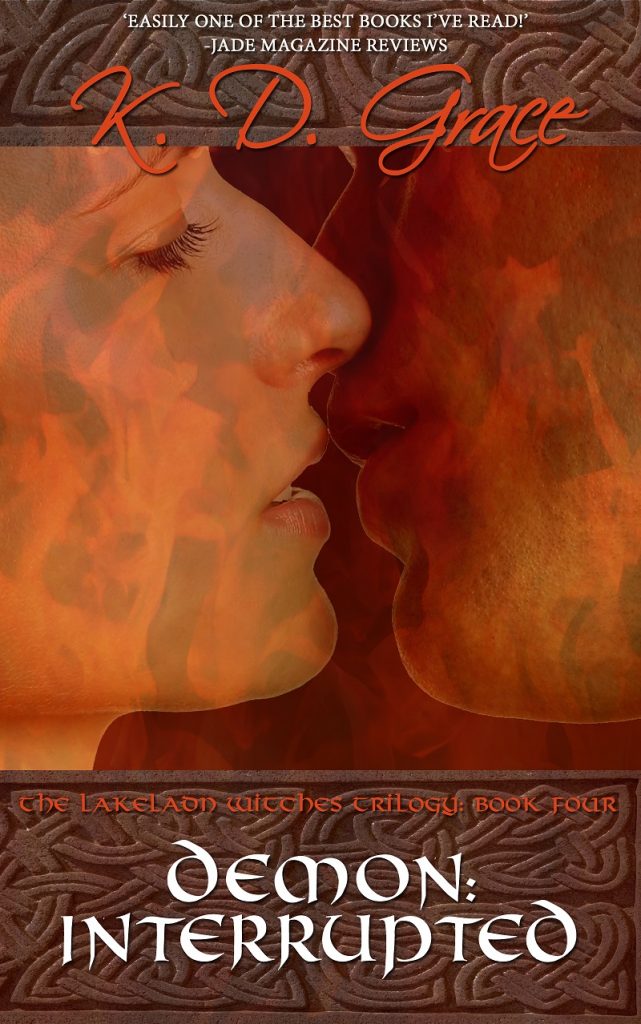 In a room full of people Ferris could remain totally unnoticed. It was almost as though he were invisible. He heard things that way, saw things that others missed. Fiori suspected that was part of his magic. However, at the moment, he was completely and totally the centre of her attention as his warm, wet tongue teased its way down and around the pucker peaks and the rapid rise and fall of her breasts. One splayed hand cupped and fondled her tight pubic curls while the other worried open his fly. What he was doing to her body was also a part of his magic and way more of a surprise, considering the man’s unassuming nature, than his ability to blend in.

‘Do you want me to make love to you?’ He asked it as simply as a parent would ask a child if she would like a bedtime story. He asked it because he knew in a house where sex magic was practiced, healing came in the form of passion, and she nodded again because she knew that too. His cock was already hard, but then she had noticed that it often was. In those times when he allowed attention to be drawn to himself, in those times when he made his presence known he neither attempted to hide his erection nor did he attempt to flaunt it. It was the ease and the comfort of which he wore his own masculinity that made him seem like a much larger man than he really was. In spite of his chameleon nature, he was not shy by any means, and his stamina and his finesse made him a welcome edition to the beds of all of the Elemental witches and their consorts.

Impatient for the feel of him freed, she shoved at his trousers, the scrape of the zipper seeming unusually loud in the quiet room. He ran his hand down to aid her as she worried his cock free. He was neither large nor small. Even his cock was nothing unusual to draw attention to itself, and yet there was no one at Elemental Cottage who didn’t relish the thought of Ferris between their legs, of Ferris shifting and grinding as though his unassuming penis had a secret magic all its own once properly sheathed in an appreciative pussy or mouth or arsehole.

His breath caught with a grunt as she fisted the length of him and she could almost feel the ripples of lust rising up the vertebrae of his spine. For a second he wrapped his hand around hers and shifted his hips. Then he pulled her fingers free, kissing each one of them, running his tongue in ticklish strokes over the tips, making her hips rock against the mattress. ‘I’m going to taste you now. I can already smell how good you’ll be.’ With a wriggle of his arse and a shove with his feet he shed his trousers as he crawled down between her thighs, nudging her open with the smoothly shaven wedge of his jaw, clearing the way with nose and lips, teeth and tongue. The humidity of his breath blew across her clit, which rose up in anticipation.

‘There,’ he said, his fingers parting her as agiley and exactingly as if he were a pianist and she were his instrument. For an age he studied her, fingered her, arranged her as though there were only one way, the best way to approach her dark, heavy folds, and he would not partake until he knew exactly what would bring all of her focus, all of her energy, all of her arousal to the very centre of his attention. ‘And now –’ his words were little more than a rush of breath ‘–I’ll give you what you need.’ He took her with his whole mouth, hunched over her like a lion at his prey, the muscles of his shoulders flexed tight, dusted and gilded in moonlight. And she felt the bloom of her arousal like a bud swelling, bursting, opening. Then the bloom became an explosion rising up from someplace suspended above the base of her spine. He held her hips, held her steady with strength his body belied as she bucked against his mouth, as she convulsed, as the moon moved in and out amid the undulation of slate clouds.

In the hazy vision of heat he seemed larger than himself, much larger than himself as though his arousal, their arousal together had released something broader of shoulder, deeper of chest, darker of memory and, as the moon disappeared, the power of him rose like a shadow thick and all-consuming and, somehow, other than himself. The hair on the back of her neck rose. Gooseflesh prickled over her breasts, even as she rocked out her orgasm against his mouth.

But before the tingle of uncertainty and the edge of fear could take hold, the moon reappeared and unassuming Ferris gave her clit on last hard tug with his lips and then rose over her, positioning himself, easing her open with his knees and his hips.

‘I need you in me,’ she said, her voice nearly lost in her struggle for oxygen.

‘A need which I share,’ came his urgent reply. It took no more than the tucking of his hips and a single thrust and he was in deep. She was slick and ready for him, gripping him as though she hadn’t just come, as though she were desperate for him to take her. With arms much stronger than they looked, he lifted her legs around his hips and 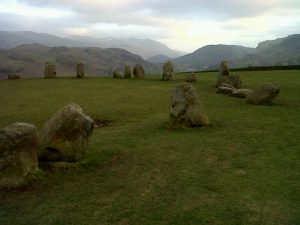 positioned himself so that with each thrust he raked her clit, and she could almost swear that in the stark relief of moonlight and shadow his eyes were onyx black and yet bright, so bright. Even in the glow of a nearly full moon, he road her in the light of an after image that made no sense, and she was reminded that not even Ferris understood his own magic. The closer they both came to orgasm the larger and heavier the after image grew. And the larger the after image, the harder they strained for release. When orgasm broke over them, so did the shadow, consuming them for the briefest of moments and then receding behind their own efforts to recover themselves taking with it Fiori’s urge to speak of it, to question it.