Celebrating The Collared Collection: Interview with a Pet 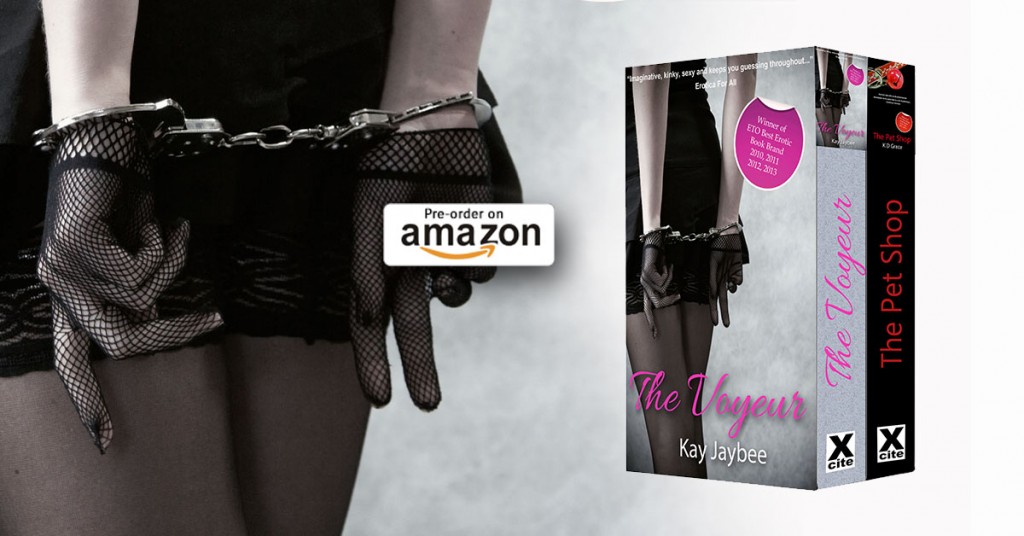 I can’t tell you how excited I am about the upcoming release of The Collared Collection – my chance to be in cahoots with Kay Jaybee! The Collared Collection puts The Voyeur and The Pet Shop together in a two-volume box set. It’s such a pleasure to see our names together on a box set that contains two of our very favourite, and possibly our kinkiest works.

The Collared Collection is a two novel boxed set from the pens of multi-award winning erotica writers, Kay Jaybee and Kd Grace .

The Collared Collection is up for pre-order now, so nab yours early and enjoy all the kink and all the sizzle that much faster. You won’t regret it.

And in honour of The Collared Collection and to titillate you a bit, here’s and interview with Tino from The Pet Shop. Enjoy! 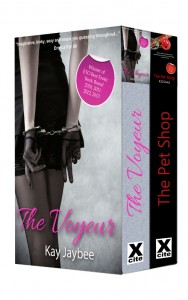 In The Pet Shop by KD Grace: In appreciation for a job well done, Stella James’s boss sends her a pet, a human pet. The mischievous Tino comes straight from The Pet Shop complete with a collar, a leash, and an erection. Stella soon discovers the pleasure of keeping Pets, especially this one, it’s extremely addicting. Obsessed with Tino and with the reclusive philanthropist, Vincent Evanston, who looks like Tino, but couldn’t be more different, Stella is drawn into the secret world of The Pet Shop. As her animal lust awakens, Stella must walk the thin line that seperates the business of pleasure from the more dangerous business of the heart or suffer the consequences.

Interview with a Pet

I was really lucky to get an interview with Tino because Tino’s The Pet Shop’s most popular Pet, and his schedule is always full. But just looking at those lovely dark eyes and that bedroom mussed auburn hair, I can see why. Anyway, Tino had to work me in to his schedule, after all he does have a starring role in MY novel, and now in The Collared Collection, so he owes me.

KD: Welcome, Tino! *smooths hair, checks breath in hand* It’s lovely of you to let me interview you. I just want to say that it’s a real pleasure to meet you in person and…

Oh, sorry folks, I just remembered, The Pet Minder’s Manual says Pets only wear clothes in public and
they’re much more comfortable naked. I certainly wouldn’t want Tino to be uncomfortable, so I’ll just get him out of this shirt. (breathe, KD, Breathe!) And now the trousers and then we can get on with the… Oh my! *checks to make sure she’s not actually drooling*

There now, that’s better, isn’t it, Tino? Ah, that’s sweet. Tino’s sitting on the floor now with his head resting on my thigh. I think that means he likes me. I have been assured that he won’t bite… not unless I tell him to. Though I do hear he has a reputation for being a bit naughty at times. I suppose that’s my fault because, well, I did write him that way. Anyway, on with the interview.

KD: So, Tino, tell us about being a Pet. What’s it like having a keeper for a weekend and letting them take care of you and feed you and bathe you? And what’s it like taking care of their needs, if you know what I mean.

KD: Um … I know the Pet Minder’s manual says that Pets don’t talk. Okay, I can understand that, Tino, 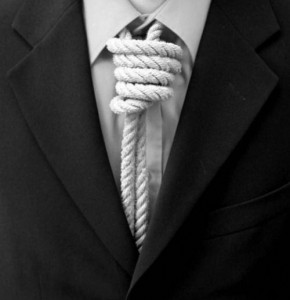 I understand you staying in character and all. No doubt that’s what makes having a Pet such a stimulating experience. But this is an interview. I mean you’re not really MY Pet. Surely you could just give us a little clue. After all I did write you, remember?

KD: Okay, maybe that question’s a bit personal. We certainly don’t want to infringe on the privacy of any of your keepers, Tino. Here’s a good question, and I’m sure our readers are dying to know. I’ve heard that no one actually knows where The Pet Shop is, not even the Pets. I’ve heard that Pets come and go by way of black vans and they never see the route. Is that true? I’ve heard that some people have chosen to become full-time Pets and never leave the Pet Shop, but others, like you, enjoy having a keeper. Why do you suppose that is?

KD: Tino? Tino what are you doing? Tino, stop that! Stop that right now. You’re a bad boy! You know you’re not supposed to play with your… er to behave badly during an interview. *whispers next to Tino’s ear* Look, Tino, I know you want to play, but I’m trying to do an interview here, for godsake!

Oh dear. Jeez. This is a bit embarrassing, everyone, I do apologize. He’s bent over offering me his bottom. And the manual does say that naughty Pets have to be punished. It says they have to be taught who’s the alpha in the Pet/keeper relationship, and… er I guess that would be me. It says that I either need to use my hand or a rolled up newspaper on that lovely backside. Could you folks excuse me for just a minute. *spanks luscious offered-up, bare bottom until it’s nice and pink.*

Now then, where were we? Oh yes. You’re probably wondering why I’m interviewing a Pet from the Pet Shop when he isn’t allowed to even speak. Well, first of all, let me just say if you could see this luscious pink bottom, and the rest of the package you wouldn’t have to ask.

But, actually that’s only a part of the reason I wanted to interview Tino. You see, I have it on good authority that in his life in the real world, Tino’s actually the reclusive, richer-than-God eco-warrior, and entrepreneur, Vincent Evanston. Problem is, no one has seen the man in ages. But Stella James has shown me archive photos of Vincent Evanston, and we agree. He sure looks a lot like Tino.

Actually, I was able to catch up with Vincent Evanston. I managed to get hold of his unlisted Blackberry number. You probably wonder how I could manage that. Well, it’s simple really. He’s my characterJ I thought since he could talk and Tino might not be willing to that maybe I could get a statement from him.

Poor timing on my part, really. I caught him in the woods photographing pileated woodpeckers. He really didn’t appreciate the interruption. But when I asked him if he were Tino, he just sort of growled at me and said, I quote, ‘Tino’s not here.’ Then he hung up on me. Kind of rude, really, but you can be that way when your rich and brooding, and you look like…well you look like Tino. Only with clothes – outdoorsy, manly, sexy sort of clothes…

Well folks, I have to admit, I’m a little disappointed. I’m a pretty good interviewer, and I was sure if anyone could get Tino to talk, I could. But instead, he’s just sitting on the floor licking my leg with that delicious, pink tongue of his. He’s sitting kind of tenderly on that tight little bottom I just spanked, which I have to say, leaves his impressive package, rather well-exposed. *Makes an effort not to look. Sort of.* Still, I did write Tino, after all. If anyone can get him to talk, it should be me. Let’s try again.

KD: Tino, rumour has it you’re spending an awful lot of time with Stella James, that new employee over at the Stridgida Company. I hear she’s scheduled you to spend yet another weekend with her. She knows you’re not cheap, right? Frankly I’m surprised she’d have you at all, since I hear she’s a bit of a prude.

Tino:… *Nips KD’s thigh and rubs himself against it*

KD: Ouch! I thought you weren’t supposed to bite unless I asked. So, can I take that to mean Stella’s no prude? Maybe we’ve worked out a code here, folks, a way of communicating that doesn’t involve talking. This is a good sign – a nip on the thigh for no, and a lick for yes? How about that, Tino? Will that work? Oooh! Not sure what that meant. Never mind, let’s try to get on with it. So tell me, Tino, is it possible that a certain very popular Pet might be a little bit smitten? Tino! Tino, stop humping my leg! God, this is so embarrassing. Stop it right now or I’ll have to punish you again.

Wait a minute. I get the feeling you might be liking this whole spanking thing just a little too much.

Let’s talk a little more about Stella James. I heard while Stella was in Oregon on business, she actually met Vincent Evanston, quite by accident. Sorry Tino, but that sounds like way more than a coincidence to me. And if anyone can get to the bottom of this whole Tino/Vincent mystery, well I think Stella is the 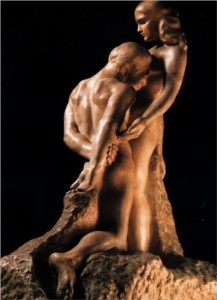 woman to do it. Surely you have something to say about that, Tino?

KD: Tino! Tino stop it. I’m trying to type an interview here and you can’t be blrrrrk me. Tino, am I going to have to spknf;asdoj you again? Tino, move! I can’t see the monitor with yourmcdksn in my xmdlos;pa.

Umm, looks like that’s it for the interview, folks I’m happy we hadal ldkf;lkeoi. I hope you’ll alkmlasdfl The Collared Collection and that you vrpeyx@@@ Kay Jaybee’s novel, The Voyeur, and the xcdewpelkfj; my novel, The Pet Shop to find out the trsa;ldkfj about Tino and Vincent. Thanks again, for ssssssdrpioeu me. Now if you’ll excuse me I really have to punnlaknsf a naughty Pettttttttt.