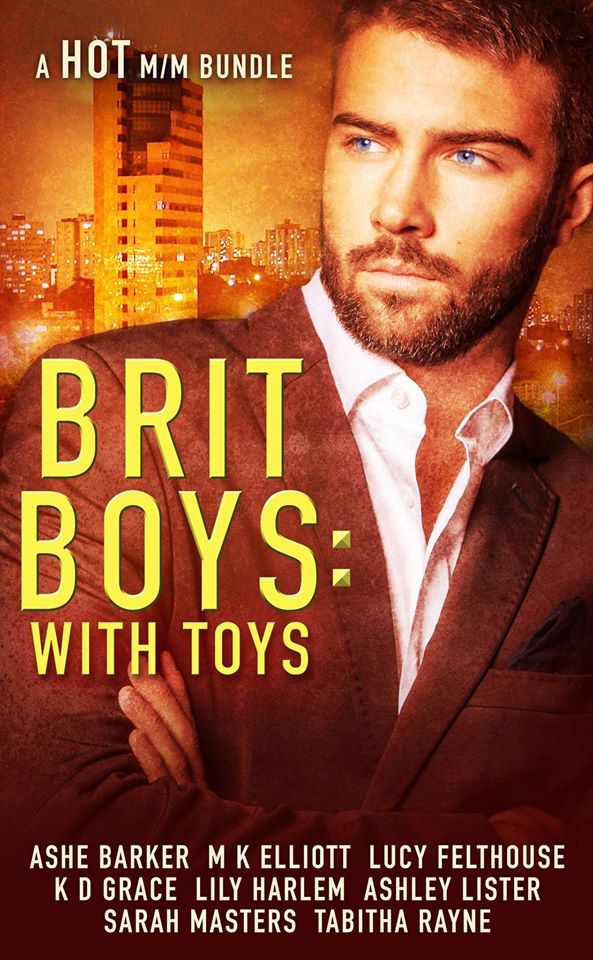 The authors of the new Brit Boys collection, Brit Boys with Toys, are very excited to reveal our delicious cover. Yes, the cover is sizzling and sexy, like our boys and their stories. Remember, you can give yourself an early Christmas pressie this year by pre-ordering this delish M/M collection from Amazon now, so you’ll have it steaming up the screen of your eReader first thing on the 22nd! Yup Christmas may be coming early, but Brit Boys with Toys, well they’re coming right on time. 😉 😉 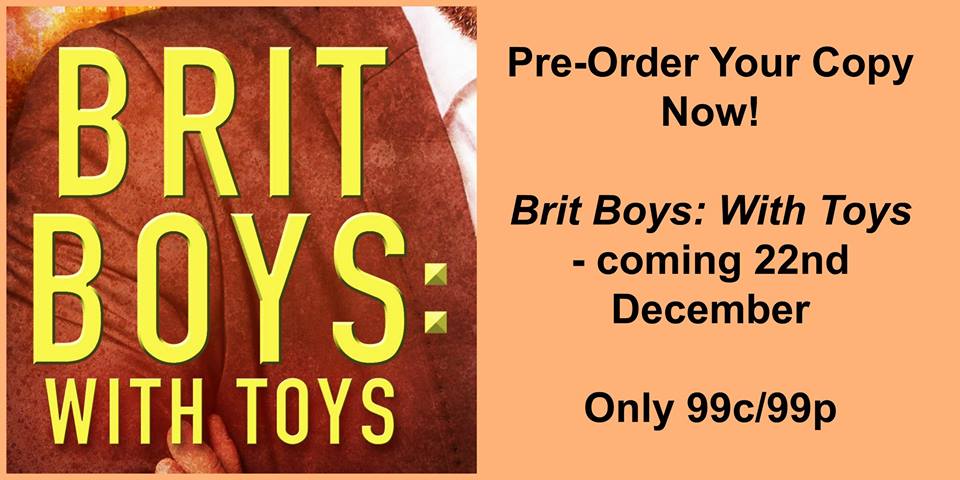 The energy bar must have helped. Will seemed coherent enough. “I can’t feel my hands,” he said battling to get his sleeping bag out of its waterproof sack.

“Would you look at that,” Will said as Doc grabbed the bag. “Amazingly, my middle finger works just fine.” He flipped him off.

“So does your smart mouth.” Without thinking Doc zipped the two bags together.

“Oh. Right.” But Will could no more manage the buttons and zippers on his clothing than he could his sleeping bag.

This time when Doc shoved his hands away and pushed the waterproof jacket off his shoulders, Will only watched, eyes focused on the process as though it were something totally new to him. Doc cursed the fiddly buttons on the man’s shirt, his own hands none too agile from the cold and wet and the fact that he was undressing Will fucking Charles, about whom he’d been having less than pristine thoughts since his first view of the man’s Arse, Will fucking Charles with whom he was about to cuddle down into a sleeping bag butt naked, never mind that it was with good reason.

Will sucked a harsh breath. “Your damned hands are like ice cubes, Woodsy.”

“Fucking like to see you try.” Will’s teeth were chattering hard, and his whole body trembling from the cold as Doc worried the shorts down over his commando bum and found himself face to cock, which made the blighter burst into hysterical laughter. “Have we ulterior motives, Mr. Jones? Where the hell’s urBrain? I have to get this on camera.”

“Want a selfie of your cock, do you, you shivering bastard?” Doc turned his attention to the walking boots, which had stopped all progress of getting the man naked. Focusing on something other than the naked, very vulnerable body of Will fucking Charles helped clear his mind. He was too cold, to tired to get hard over what was essentially a matter of life and death, he told himself. Surely!

Once boots were dispensed with, he shoved the man into the sleeping bag and went about the awkward business of stripping himself.

“You point that thing at me, and I’ll shove it up your arse,” Doc’s own teeth sounded like a couple of spastic tap dancers had been turned loose in his mouth.

What started out as ribald comments on the shriveling effect of the cold on male tender bits dwindled to nothing more than the sound of convulsive shivering. By the time Doc had shed the last of his clothes and shoved his way down next to Will, he was seriously worried. It took all his strength, which wasn’t a helluva lot at the moment, to pull the bloke into his arms and hold him close enough to share body heat, what little there was of it. The worry subsided a bit when Will threw his arms around his neck and gave a harsh chuckle against his throat. “This was seriously worth getting hypothermic for. Pity I’m too fucking tired to appreciate it.”

Though Doc agreed wholeheartedly with the sentiment, his focus was on getting Will warm, then he’d get out the backpacking stove and fix them something hot. That was the last thing he remembered, that and the feel of Will’s body shivering against him, in the tent redolent with the male scent of core heat and wet gear all overlaid by the icy metal smell of the fells in a storm.