As my last guest of 2012, I’m elated to welcome Ashley Lister’s alter-ego, Lisette Ashton, to my site to talk about the novel I’ve been anxiously waiting to read, Dragon Desire. Welcome back to A Hopeful Romantic, Ashley/Lisette, and do tell us all about Dragon Desire: The Quest for Satisfaction. 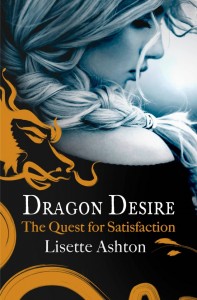 First I have to thank the lovely KD Grace for inviting me here today. KD Grace is one of my favourite authors and I’m genuinely honoured to be a guest on her blog.

Second I’d like to wish season’s greetings to everyone reading this. It’s almost New Year and I hope the festive period has brought you everything you personally desired.

And, on the subject of New Year celebrations, I should point out that this year, according to the Chinese horoscope, has been the year of the dragon. Like a lot of readers, I’ve always been fascinated by dragons. There’s something about the majesty, power and excitement of these mythical creatures that I find thrilling. Perhaps it’s the idea of dragons devouring maidens? It could be the suggestion of power they embody. Or maybe it’s the thought of a dragon capturing a damsel and insisting she be rescued by a brave knight…?

Since I wrote my first short story in this genre I’ve now written another novel, plan to write a sequel and I’ve got ideas for a half dozen more short stories. There’s something I find compelling about writing of an age where life was made simple by a lack of technology and surfeit of magic and dragons. The following extract from Dragon Desire introduces the story’s hero, Owain, and the dragon he guards, Drusilla.

As long as he could continue to overlook the fact that there was a leather wedding band on her heart finger, Owain knew he would enjoy rutting with the redhead in any one of the hay-filled stalls.

“I didn’t mean to upset you with my ignorant comment about dragon horn.”

She didn’t look at him as she said the words. Instead they were spoken over her shoulder as she continued to pet Drusilla. The dragon continued to purr as the redhead caressed its cheek and wings.

“You weren’t to know,” he assured her. He was thankful for the darkness of the stalls. It stopped her from seeing the solemnity of his features. “I once had a bad experience because of someone spinning lies about dragon horn,” he explained. “I suppose I overreact whenever it’s mentioned nowadays.”

He looked up to see she had stopped petting the dragon.

Silently, she had moved to stand by his side. She stared up at him, her emerald eyes sparkling softly. Her chest seemed to rise and fall with a quickened pace. His gaze fell to the heave of her breasts. The thrust of her nipples jutted sharp against the light cotton of her kirtles.

Unable to stop himself, Owain licked his lips.

“Do you like what you see, sire?” she asked coyly.

The red and gold kirtles were laced with ribbon at the breast. She reached for the dangling thread of one ribbon and teased it so the binding began to unravel.

The coquettish lilt to her voice was thoroughly endearing.

Owain dearly wanted to show decency and propriety. He wanted to mention the fact that she wore a leather band on her heart finger and was therefore either married or betrothed to another. But, whilst he wanted to act like a gallant knight or chivalrous suitor, his actions were dictated by the needs of his loins.

He pulled her into his embrace, snaking one arm around her waist so that she was brought close to him. He lowered his face to her lips and then they were kissing with a passion that was as ferocious and fulfilling as he had expected.

Her tongue explored his mouth. She curled one leg around his hip, pressing the centre of her sex against thigh. A sob of raw desire whimpered from her throat as she ground herself against him. Her hands pushed at his chest, fumbling to remove his tunic and gain access to his bare flesh.

With a moan of desperation she wrenched her mouth from his.

He couldn’t hide his smile.

“If you insist.” He lowered his face to the unfastened décolletage of her kirtles and pressed his nose between her breasts. Drinking in the dusky scent of her nearness he moved his mouth over one orb and suckled against the stiff, throbbing tip of her nipple.

He stiffened at the sound and cast a wary glance toward the doorway. When he realised that no one had been alerted by the cry of her pleasure he allowed himself to relax and enjoy the experience and stop worrying that she might have a husband or fiancé lurking in the shadows ready to accuse her of being adulterous or challenge him for being a swiver.

When the redhead groaned again Owain savoured the sound.

He resisted the urge to buck his loins against her.

Working with dragons fuelled him with a constant arousal but he was loathe to surrender himself so quickly to such a base responses. Holding her in one arm, teasing the shape of her exposed breast with one hand as he suckled against the hard and unyielding tip of the other, Owain revelled in her heightened responses to his teasing.

She was breathless and trembling and desperate for his cock.

She grabbed at his tunic with her left hand. It was the same hand that bore the leather band on her heart finger.