A Free Snog in the Snow

It’s a double whammy today here on a Hopeless Romantic. It’s not only the last day of Blissemas and another chance to win the fab Blisemas grand prize with a Snog in the Snow, but this sizzling, snowy snog is from my MM paranormal, novella, Landscapes, which is free at the moment along with a lot of other fab MM reads for the Love Under the Mistletoe MM Christmas Frolic. Follow either of the above links for your copy.

Comment on any of the Snog in the Snow blog posts offered up today for another chance to win a fully-loaded Kindle Fire 7!

‘You could have told me.’ The sound of his voice clenched my heart. For a moment I was certain I was dreaming. Reese constantly tortured me from the dream world. But I was awake, wide awake, and as the breeze shifted I could smell his sweet blood. ‘You could have come to me in the beginning. I’m not that unapproachable.’

With difficulty I found my voice, as though it were something long lost from me. ‘Perhaps you were too approachable.’ I gathered my wits, what little were left to me, and turned to face him. His hair was a bit longer, blown by the wind, and the stubble of a long day caressed his cheeks, and God, he was as beautiful as I remembered. Then I smelled Talia on him, felt her magic tingling over his skin. ‘She shouldn’t have come to you. If you’re back here because 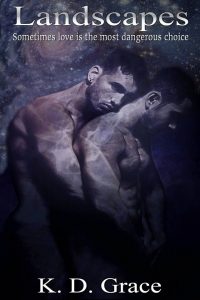 you feel sorry for the poor vampire, then maybe I’ll rip your throat out and drain you and you can see where your sympathy gets you.’

He moved to stand next to me, knee-deep in the snow that buried the half-finished garden. ‘You won’t get any sympathy from me. You were a complete twat. You should be damn glad I’m not wearing garlic and sporting a stake. You didn’t ask for what happened to you, Alonso. I get that. And even if you did, we play with the hand we’re dealt. All of us.’

There was a hitch in his breath and I could almost taste the heat of his blood in the soft spot at his throat. In a wave of dizziness I stepped away. ‘Afraid I’m not very good at cards. What did you come for Reese?’

‘I came to say I’m sorry, to say that I forgive you and to ask your forgivness.’

I dropped onto the bench as though I were suddenly boneless. To my distress, he sat down next to me and pulled the wool scarf away from his exquisitely tender throat. His pulse was rapid with excitement. With fear. ‘You need to feed, Alonso, you look like hell.’ He pulled open the collar of his shirt. ‘Take from me.’

‘Christ, Reese,’ I shoved off the bench, back-pedaling until I nearly tripped over a pile of stones buried under the snow. ‘You can’t make that offer, not now.’

‘I … I don’t understand. You still want me. I saw that. Talia showed me, and God knows I want you.’

‘Of course I want you. Like I’ve never wanted anything in my life, but I’m not safe Reese. I haven’t fed in … too long. The very scent of you is driving me mad. If I take from you, I won’t be able to stop.’

‘Well I’m not. Your death may mean nothing to you, but it’s not a risk I’m willing to take, and believe me the risk is very real.’

I smelled the sharpening of fear, as he scrambled off the bench. The night was icy cold and heavy with the threat of snow. I could sense him shivering even through his coat. He squared his shoulders and spoke between chattering teeth. ‘What do you want me to do, Alonso. Tell me, and I’ll do it.’

I took a deep breath, struggling to clear my head. ‘Go to the house – to the kitchen. Cook is asleep but there’ll be food. Eat.’

‘Eat again,’ I commanded, turning to face him just to make sure he was really there and not something my desperate imagination had conjured. ‘Because when I return,’ I held his gaze ‘you’ll need all of your strength. We both will. Go! Now!’

Reese paced Alonso’s study while Talia sat on the Cordovan leather sofa pretending to read a novel. ‘It’s almost dawn,’ he said, for the third time in ten minutes. ‘Where the hell is he?’ The snow had set in soon after Alonso had left. How well a vampire could cope with a blizzard, Reece didn’t know.

‘It’s not like going down to the pub.’ Talia sat the book down and gazed up at the monitor above his desk, the one that showed what Alonso would see if there had been a window there. ‘He’s careful when he feeds, never leaving any trace. Besides, he knows the Lakes like the back of his hand. He won’t get caught out. High View is honeycombed with caves. There are also a few old slate quarries, as you know.’ She motioned him into the rough stone corridor and led him down to the Day Room. There, the only space that wasn’t filled with monitors and controls was a worktable to one side spread with a large, laminated map of the area. She ran her finger along a bright red line leading from the house out to the backside of the fell. ‘There.’ She circled a spot on the map with a grease marker. ‘Pull up camera eight.’

At first the display on the big monitor looked blank, then the night cameras kicked in and they could see the rocky walls in monotone shades of green and gray. Reese recognized the cave he’d discovered Alonso in with the walker. At first they could see nothing, but suddenly there was a flash of movement across the screen, and then it was gone.

‘There,’ they both said at the same time.

‘Is there any way of adjusting that camera?’ Reese asked.

‘Not from here, but that cave opens into a tunnel that leads to the wine cellar. It’s wired to send a signal if anyone but Alonso or a designated person is there.’

‘Show me where it’s at. It could be that he’s in there and he’s hurt. Look,’ he said when she raised a skeptical eyebrow, ‘I can’t lose him before I get the chance to properly make things right between us, so where’s the damned wine cellar?’

She gave him directions, then stayed near the monitors to watch. The fell tops were already tinged with gray from the coming sunrise, and Reese could barely keep back his rising panic.

He was down the steps and halfway across the cavernous wine cellar, when a door at the back burst open, and Alonso pushed his way in, dark hair glistening beneath the bare light bulb with a generous dusting of snow. For a moment neither man spoke, but only stood gazing at the other. And then Reese found his voice. ‘I was worried. The sun’s coming up.’

‘It was the sheep,’ Alonso said. ‘They slowed me down a bit.’

He brushed snow from the shoulders of his black wool coat, then offered Reese an embarrassed grin. ‘If I’d gone straight for the shepherd without an appetizer, I’m afraid he wouldn’t be home shagging his wife senseless right now.’

‘Well their blood at least. It’s a poor substitute, but it was necessary this time.’ The shepherd had managed to get all but three into the barn against the weather, which was bad enough that he had to hole up there until it passed. Good thing for me.’ He’ll think the sheep were lost in the storm, and when the weather clears enough that I can arrange it, he’ll find a nice fat wad of £20 notes stuffed in the seat of his Land Rover.’

Alonso held his ground. ‘That depends on you.’

The next step forward was uncertain. The one after that wasn’t, as Reese moved into Alonso’s arms, feeling the chill of the wet snow, smelling the scent of Cumbrian winter and beneath that the spicy, earthy scent of the man. For a long time they stood in each other’s arms, until Reese began to shiver, and Alonso opened his coat and pulled him in to his body, warm from feeding.

He lowered his mouth to Reese’s throat and kissed the shudder of his pulse. ‘I am. Now all I’m hungry for is you.’ The rocking of his hips alerted Reese to the erection nestled in his trousers. That and the careful rake of his canines against Reese’ throat made his own cock rise to attention.

Much later, Alonso lay with Reese pulled into a spoon position in his big four-poster bed, his hand absently cupping first Reese’s cock, then his sac until, in spite of the whirlwind of sex they’d already had, Reese rocked his hips slowly back and forth into his grip. ‘I know you have questions,’ Alonso said. He rose up on one elbow and kissed Reese’ ear. ‘Don’t be afraid to ask. I’ll try very hard to give you answers. But there may be times when I won’t be able to. There may be times when I’ll have to work on it. But know this,’ he said,’ moving his hand over Reese’s hips to cup his arse and stroke the cleft in between. ‘I won’t lie to you, even though there’ll be answers you won’t like, answers that may shock you.’

‘I was with the succubus, remember? You’ll find I’m not so easy to shock anymore.’ With a contortionist twist of his upper body, he curled his fingers in Alonso’s mussed hair and guided his mouth down to meet his, kissing him hard leaving them both breathless as he pulled away. ‘I know your heart, Alonso. That’s why I came back. That’s what will hold me here.’

2 Responses to “A Free Snog in the Snow”