Inspiration Take Me, I’m Yours!

August 12, 2018   Category: Uncategorized   Comments Off on Inspiration Take Me, I’m Yours!

It’s elusive, it’s mysterious, it’s exhilarating, and we erotic writers crave it more than the
sex we write about. We chase it shamelessly, we long for it passionately, we would gladly make ourselves slaves to its every whim, and no matter how fickle it is, we always welcome it back with open arms. When it’s with us, it’s at least as good as the best sex. And when it’s not, we mourn its loss like a lover. I’m talking about inspiration, of course. It’s the breath of life for every story ever written and the coveted ethereal presence that every writer yearns for.

The mythological link to inspiration is especially interesting to me in the light of a life-long fascination with mythology. Half of my novels and at least that many of my short stories and novellas find their inspiration in mythology or fairy tales of some sort. My Medusa’s Consortium novels and stories all have their roots in mythology. 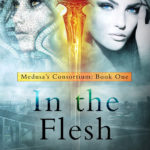 Greek mythology – mythology of any kind, really — is fabulous inspiration for writers. The gods are always dipping their wicks where they don’t belong and finding ever more creative ways to do so. Nine months later, viola! A magical child is born, a child with gifts that will be needed to save the world, or at least a little part of it. But there’s one story that always comes to my mind where the lovely virgin resists, and no wick-dipping occurs. That’s the story of Apollo and Daphne.

The Muses serve Apollo, so of course this myth interests me. Apollo is the god oflight and the sun; truth and prophecy; medicine, healing, and plague. He is the god of music, poetry, and the arts; and all intellectual pursuit. If ever there was a wick we writers would like to be dipped by, it surely has to be Apollo. Daphne is a mountain nymph and not interested in giving up her virginity to some randy god. While Apollo is pursuing her, she prays to her father, who is a river god, and he turns her into a laurel tree. Ovid claims it’s not Daphne’s fault that she’s not hot for Apollo right back. He claims that Cupid, who is angry at Apollo shoots Daphne with a leaden arrow, which prevents her from returning Apollo’s feelings. But what matters is that she misses out on Apollo’s inspiration. 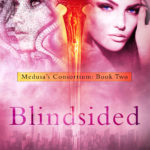 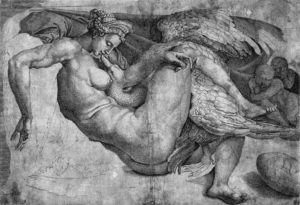 The gods aren’t always gentle in their seductions. Hades drags Persephone off to the underworld screaming and kicking all the way. Zeus turns Io into a white cow, who is tortured and tormented by Hera. In the form of an eagle, he abducts Ganymede and drags him away to Mount Olympus. Writers know well that inspiration doesn’t always come in a gentle form. In fact one of my creative writing teachers used to advise her students to go to the place inside themselves that most frightened them, most disgusted them, most disturbed them, and that’s the place where they would find inspiration, that’s the place from which their writing would be the most powerful.

I’m quite disturbed by the journey In The Flesh is taking me on. It’s the story of a demonic 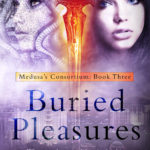 spirit who is irresistable, and insatiable, and gives everything he promises his lovers and more. But the price of passion beyond imagining is high. Of course he’s just a scary stalker bastard with divine powers, but at the same time, I go right a long with the dangerous, even deadly, seduction of Susan. Would you??? I would. Or at least I think I would. Obsession is a harsh master, and not always the giver of rewards promised. Though at the end of the day, most of us would gladly pay the price for inspiration.

Whether inspiration comes in gentle, beautiful forms or whether it drags us kicking and screaming and tears us from limb to limb, the result will be something greater than what it sprang from. From the seductions of the gods, the children born were always larger than life. They were heroes and monsters and fantastical creatures, but they were all born of that joining of divinity and humanity, they were all the result of what happens when something greater penetrates the blood and the bone and the grey matter of our humanity. What comes from that inspiration may indeed be monstrous or fantastical, but it will always be, in the mythical sense, born of the gods. 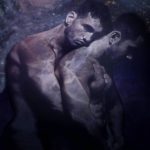 Which leads me back to Daphne and Apollo. The cost of inspiration is the loss of innocence. We are seduced, we are penetrated, we are impregnated with something new, something fresh, something possibly even frightening, something that we, as writers must carry to term and give birth to. But none of that can happen without yielding to the seduction. Daphne became a tree, unable to move, unable to think, unable to ever be penetrated or inspired. One can only imagine what may have resulted from the willing union with the god of light and truth and poetry and the arts and all the things we writers crave. I’ll be honest, I fantasize about Apollo. I fantasize about inviting him right on in and saying I’m yours. I’ll take all you can give me, and please, feel free to stay as long as you like. Though, in truth, in my fantasy, I skip the dangerous and scary bits. And encounters with inspiration can often be dangerous and scary. I think it’s probably Apollo who inspired my demon lover – a terrifying version of divine inspiration. 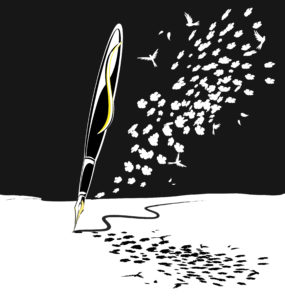 There’s a cost to inspiration. It’s the obsession we all know as writers, the one that won’t allow us to think about anything else in the waking world and sometimes even in the dream world until we get the very last word down, until we make it shine exactly the way we conceived it, exactly the way it penetrated us. My heart is racing just writing this because every writer knows what it feels like, and every writer lives for it to happen again and again and again. So yeah, forget the tree rubbish, laurel or otherwise. Inspiration, take me, I’m yours. Have your way with me. I couldn’t be more willing if I tried.