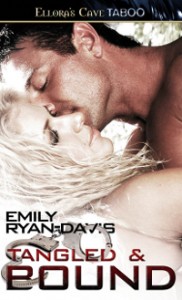 Friendly, adventurous, sexually submissive…and a complete stranger. She’s exactly the anonymous, no-consequences diversion fetish-club owner Sam needs to kick off a few days in Las Vegas. He doesn’t hesitate to take her up against the door of the in-flight bathroom.

When Sam informs her that his plans don’t include a long-term D/s relationship with an impulsive young blonde for whom submission is more than likely a passing whim, Melanie throws herself into convincing him she’s exactly the submissive lover he wants, needs and can’t live without.

Halfway into her non-stop flight from New York to Las Vegas, Melanie Burke started to squirm.  Her restlessness had nothing to do with her tiny middle-of-the-row seat and everything to do with the muscular, denim-clad thigh touching her bare leg.

The thigh belonged to a man she’d noticed hours earlier while waiting to board. In a sea of people wearing jeans and t-shirts, he’d stood out, and not because of his scuffed cowboy boots and oversized belt buckle. Well, not only because of those. While the whole Texas horse wrangler look was out of place in LaGuardia, he certainly wasn’t the only man doing the Western thing. He was the only one doing it well, though.

Something about him declared, “I’m in charge”. Ever since she’d gotten wet while reading a BDSM-themed novel earlier in the year, Melanie had become a sneaky people-watcher, looking for the whole “in charge” vibe Dominant men apparently put off. When she’d despaired ever finding her Dom, Brooke had advised her to chill and wait. According to Brooke, Melanie would just know. She was on the verge of giving up and going back to her normal sex routine of grad students and bar crawlers, but then she saw him.

During boarding call, she’d covertly watched the way he stood apart from the crowd even while standing in the middle of it. Her attraction to him was inexplicable. The cowboy look really wasn’t to her taste. She went for guys with more of a GQ look. He didn’t exude sophisticated power like the heroes of her dog-eared novels, either, but he did take her breath away. Some part of her she was just discovering wanted to kneel at his feet and gaze up into his eyes from below.

Pale, grass-green eyes met hers. Caught in the act of looking, startled by the fact she’d caught him in the act, too, she quickly shifted her focus back to the book spread across her fold-down tray.

“Good book?” Her neighbor’s voice wrapped around her, warm in the too-cold cabin. She pressed her thighs together as her simmering arousal cranked up a notch.

“Most of the world seems to like it.” She glanced up to find him still watching her. This time she was prepared for the intensity of his examination and managed to maintain eye contact. She even did a little looking of her own, mostly in the form of a closer inspection of his dark-blond evening stubble and full lips. Those lips quirked while she studied them. They would be fantastic between her legs.

As if he had access to her little fantasy, his smile widened.

“I’m not interested in most of the world. Do you like it?” He reached over, closed the book, and turned it so the front cover showed. “Who would’ve thought a simple neck tie would become so iconic?”

“It’s a very striking cover,” Melanie agreed. But totally disinteresting to her now. As far as visuals went, he had all her attention. His shoulders dominated the narrow seat. She seriously wanted to climb astride his lap and put her hands on him. Maybe rub up against that big belt buckle. And she wanted to beg him to keep talking. The Midwest meets New York accent was weirdly fascinating.

“The question still remains whether you’re enjoying the read.”

“Yes or no?” He interrupted.

Heat flashed through her. Blinking rapidly at her body’s response to his demanding inquiry, she managed to say, “I’m not sure.”

“There’s a simple way to tell.” He leaned close and spoke directly into her ear. “If you’re wet right now, you’re enjoying the book. “

The powerful confidence of his voice stirred something low in her abdomen. She was wet before his lips brushed her ear. Now she felt soaked.

“Answer me, honey.” He touched her chin and tilted her head at a slight angle. Callused fingertips settled on a spot just below her jaw. “Your heart’s racing, but I don’t think you’re scared. I think that book has you so hot, you’re dying to slip your hand into your panties.”