Posts Tagged ‘Stuck with You’

I’m always happy to promote the latest in new erotica and romance on A Hopeful Romantic, and never more so when the story is one written by a friend and sister writer whose writing journey I’ve had the pleasure to watch blossom and evolve. With that in mind, it’s my pleasure to announce Jillian Boyd’s new release, Stuck with You. 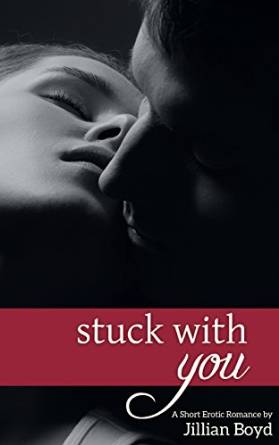 Stuck with You Blurb:

When Bethan’s work sends her and Ivan, her ex, to a conference together, she’s less than impressed. And when their flight home is grounded due to a snowstorm, she thinks it can’t get any worse…

Excerpt from Stuck with You:

He could tell she wasn’t happy about this situation. Every time she got annoyed, her Welsh accent would become sharper than a pinprick. He couldn’t blame her though; it wasn’t exactly fun to be stuck in an airport hotel during a snowstorm. With your colleague. Who’s also your ex.

Ivan watched Bethan, on the phone to her mother in Swansea. He’d only met Bethan’s mother twice during their relationship, but every time she looked at him, Ivan felt her eyes pierce his very soul. Bethan reasoned that, if looks could kill, her mother would be watching Neighbours from behind bars.

The sheer noise that came from the other end was unbelievable. Bethan held the phone away from her ear, letting her mother rant about ‘that no-good piece of London shit’.

“For a 75-year-old woman, she’s got a colourful vocabulary,” whispered Ivan. Bethan rolled her eyes.

“If she’s talking about that thing with the sock…”

Bethan turned his way and shushed him, before turning back to her mother. “I’ve got to go now… sorry. I’ll call you when there’s news. Right. Love you. Bye.”

After hanging up, she practically threw her phone onto the nightstand.

“So… that sounded pleasant,” said Ivan carefully. Bethan didn’t answer immediately. Instead, she walked up to the window, opening the curtains and peeking outside at the deluge of snow coming down from the heavens. One harsh streetlight illuminated the white sidewalks.

She turned around to face Ivan. “Looks like we’re going to be here for a while. If you want to go and do something on your own, be my guest.”

“Right,” Ivan said, feeling a little bit deflated. “What are you going to do then?”

“I don’t know. Go over the notes I took at the conference, I guess. Read a book. Watch TV.”

“And why the hell not? I took plenty of notes, and I need to type them up.”

“The notes from the conference we’ve just attended on synergy in the work place? Are they really that urgent to type up? I distinctly remember you nodding off during the keynote speech.”

“I…” Bethan started, but trailed off. He knew he’d tread onto a dangerous path with what he’d said. Eventually she said the thing he’d been expecting. And dreading. “I just want to be alone, that’s all.”

“Okay. I’m going downstairs to have dinner. I’d love it if you could… but if you don’t, that’s fine.”

The uncomfortable silence that accompanied Ivan on his way out the room was telling of just how much Bethan was still hurting. And actually, he couldn’t blame her. Seven months was in no way enough time to get over how much of a prize dick he’d been.

The truth was that he wasn’t over it either. It was hard going getting over someone who worked for the same company, in the same building as you did.

The moment he’d found out he’d be going to this conference with Bethan, he knew he was fucked. He’d tried everything in his power to avoid any confrontation, since the last one was still painfully fresh in his mind. But now there was no avoiding it. And especially not now that they were stuck in a hotel near O’Hare Airport, miles away from their respective comfort zones and in the middle of a Chicagoan snowstorm.

Sat on his own, in the virtually empty restaurant, he felt the weight of the world on his shoulders. Which was ridiculous. This was just about Bethan’s rejection of his dinner invitation. It wasn’t like he felt all his hopes of a second chance being dashed as the night ticked along.

When she’s not writing filth, she can most likely be found at her day job or in the dark of the cinema. Her stories have been published by the likes of Cleis Press, Ladylit and House of Erotica.

Buy Stuck with You here: