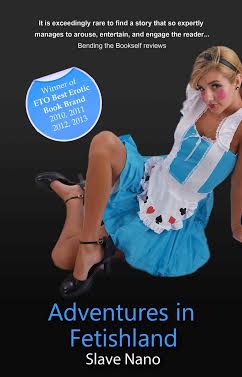 Safe words can lead to lazing ‘domming’ and that is dangerous.  What keeps a sub safe is an experienced, aware and responsible domme (I’m assuming female domme for purposes of this piece) watching her submissive all the time, gauging his responses and judging how best to develop a scene.  A domme sitting back waiting for a safe word and failing to engage fully with her play-partner is an unsafe practise as she will miss those critical reactions to stimuli.

Safe words don’t take into account the psychology of submission.  The whole point about the relationship between a dominant and submissive is the surrendering of control to another person.  Safe words get in the way of that.  In an intense scene a submissive attains a state in which he will go anywhere, do anything for that other person.  A person in that state of mind is not always in a position to make considered choices.  His focus is on serving and being taken as far as his mistress leads him. In these circumstances the judgement of an experienced domme is a much better safeguard than a safe word.

So, to sum up, if you trust the person you’re doing this with you don’t need a safe word and if you don’t trust them, be honest, a safe word isn’t going to do you any good anyway.

Ok, let’s get back to the writing now.  The extract below is from my book Adventures in Fetishland.  It is part of a scene with cling film mummification and breath play.  The setting of the book may be fantasy (it being a BDSM/fetish reinvention of the Alice stories) but underpinning it all is a psychological relationship between dominant and submissive that is real. This is edgy play for my two characters.  To have a safe word lurking in the background would undermine the whole purpose of the scene, which is to show my main character, Kim, demonstrate her trust in the Red Queen; as I think any discerning reader would recognise.

You can find out more about me and my writing at http:/slavenano.co.uk

Extract from Adventures in Fetishland 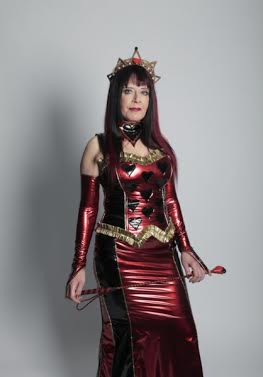 of her long hair brush against her flesh and smelt her sweet and exotic scent.  She worked especially hard to pull the cling film over Kim’s tits and ensure that her soft mounds of flesh and her engorged nipples were wrapped tight.

She had reached Kim’s neck.  How far would she go?

“Mmm,” Kim was in a sensual daze and could only mutter her approbation.

“Take this and make sure you hold it tightly between your teeth. Don’t let it go.”

She inserted a plastic tube into Kim’s mouth.  Kim’s heart jumped a beat.  What did this mean?

The cling film was wrapped around her neck and then twisted around the plastic tube to hold it firmly into place.  Kim was wetting herself with fear and anticipation.  She knew what was going to come next and, although part of her couldn’t believe that she had allowed herself to be offered up for this mummification ritual, another part of her desperately wanted to surrender herself to it.  It was this latter part that won over as she laid there quietly, submissively, yearning to be enveloped completely and give herself up.

“This is the gateway Kim, the path into another world for you. The jackal-headed god Anubis is here to ease your path through it,” she said acknowledging the presence of the duchess in the mask.  Kim drank in this moment before she was deprived of sight, perhaps of breath and life itself.  Leaning over her was the imperious dark haired figure of the Egyptian goddess arraigned in golden jewellery and precious stones with her piercing blue eyes that penetrated right into her soul.  Next to her was the snout headed figure of Anubis beckoning her on, inviting her to take a further step into this strange world she had committed herself to.  She had one last chance to look down at herself, a bizarre figure mummified in 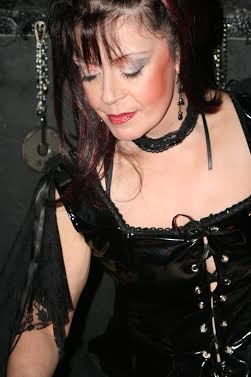 white cling film.  Kim thought she looked fantastic; very exotic and sexy in a bizarre way.  She took one deep draft of air through her nose before the cling film wrapped around her face, over her eyes and ears until finally her head was covered. She tried to imagine what she looked like now, a cocoon of white with a plastic tube sticking out of her mouth.

Deprived of sight, sound and smell and with only the taste of the plastic tube in her mouth, she was totally immersed in the sensation of the thick white film clinging to her body.  She drew in deep gasps of air through the tube, that very act making her head spin even more. The psychological sensation of surrender and submission was overpowering.  She was immersed in her own body, the overwhelming feeling being that of the tight cling film holding her in.  She felt herself drifting off and would have loved to have floated in this submissive nether-world for ever but then suddenly something yanked her back to a perverse kind of reality and an awareness that there were still other people in the room, even though the sense of them seemed to be some distance away.

At the moment Adventures in Fetishland is available for the insanely cheap price of 39p/$0.64