Myth Busting in the Big Apple 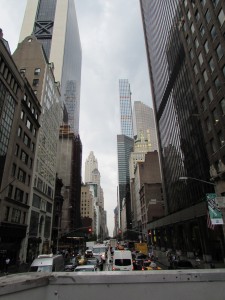 I’m just back from another stonking trip to New York City, and I have to say without a doubt I am right up there with all of the masses who heart New York. I heart it more and more each time I visit, as I get to know it better. Raymond and I were joined again this year by his sister, my lovely sister-in-law, Cynthia, who accompanied me in terrorizing the town while Raymond was training in martial arts. The three of us enjoyed several discussions about how different the city was from our original expectations of the Big Apple. So here are a few of the myths busted by our first visit, but totally shattered by our second.

Truth: Only if you’re repulsed by the smell of every sort of freshly cooked food, including pizza by the slice and 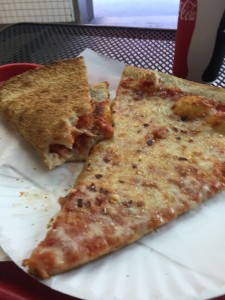 bakeries that are a feast for the eyes as well as the nose and mouth! Seriously! Nose-gasms at every corner! Oh I was
told by a gentleman from New York State who’s been visiting the city on a regular basis for a number of years that it used to stink, but those days of olfactory nastiness are long gone, replaced with scents guaranteed to make your mouth water rather than your eyes.

One of the adventures we had on this visit was to take an open-bus tour of the city — well part of the city anyway — to get an overview for further exploration. We got caught 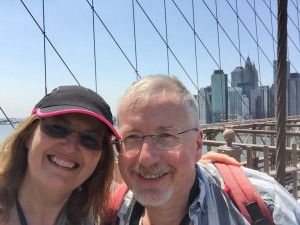 in a total downpour, and had the kinky (if you like that sort of thing) experience of doing half the tour wrapped in plastic, and I have to admit the drowned rat look was massively improved by our complimentary garbage-bag style Greyline Tours rain panchos. All that to say, even as the water rose around our feet on the floorboards of the upper deck, we sniffed and inhaled the mouthwatering scent of NYC. Which I also heart, BTW! And NYC-style pizza – I really heart that a lot! 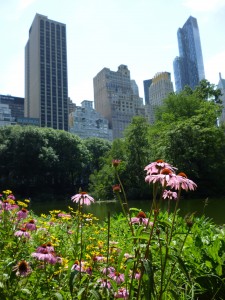 Truth: Not from what I could see! As most of you know, I do a lot of my exploring on foot wherever I go, and the Big Apple was no exception. I believe you can never really know the soul of a place until you’ve walked it with the soles of your own feet. And though NYC is way to big for me to have completely taken in hoofing it, I did give it a gallant try and, up close and personal, I have to say New York is one of the cleanest cities I’ve ever visited. Mind you, I do feel I’ve not made a fair judgment until I can get more data. I’ll hopefully have an updated report on the city’s cleanliness next year.

Myth: People in NYC are rude. 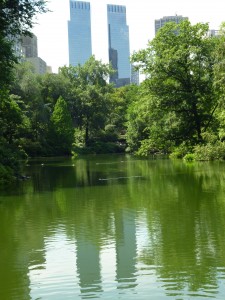 Truth: In my own experience, nothing could be farther from the truth. In two visits to

NYC, I can’t count the number of times people have been kind, helpful and mostly just friendly. I’ve never asked
anyone for directions or advice or information of any kind who didn’t give it cheerfully. I’ve never engaged anyone in conversation who wasn’t friendly. I’ve had people make room for me in a crowded subway, I’ve had people simply engage me in light conversation. I’ve had people laugh with me and joke with me and, best of all, people always seem happy to share their feelings and experiences of their city. I learned a lot about the place in just that way. 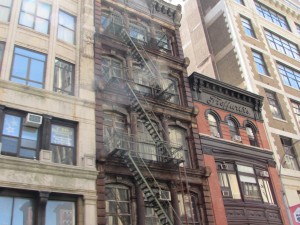 Myth: NYC is easy to get lost in.

Truth: Two words: Grid layout. I’m an old fashion girl who still enjoys the feel of a map in my hot little hands, and armed with just a map and a landmark, I’ve managed to ‘stay found’ and end up where I intended to be with very little problem. NYC is laid out in a grid, so cross streets going north and south, east and west always give a clear picture of where you are. For me, the job of navigating the Big Apple was even easier because I always came in from Penn Station, and the first thing I looked for was the Empire 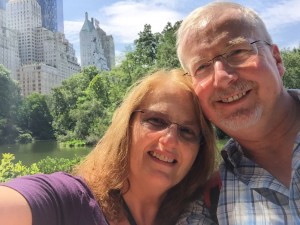 State Building. From there, the grid was my oyster – so to speak.

OK, I admit, that as a tourist, I’ve always found the open bus tours a helpful way of getting an overview of any city. I
quite often do that first, then get an idea of where to explore on foot. It works for me. However NYC is so big that there are five tour routes and several boat tours associated with the busses. That, of course, is not even
counting the Staten Island Ferry, which is free and gives some of the most amazing views of Manhattan imaginable. All that, plus the easy access to most parts of the city by the subway, and exploring is a piece of cake … from a very nice bakery … Having said all that, I have a lovely cousin who is convinced that getting lost isn’t a bad thing at all because you never know what you’d discover on the way to getting found again. 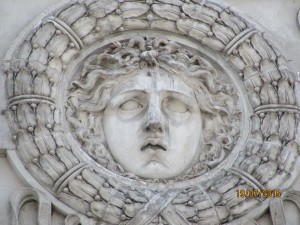 Myth: NYC is a dangerous place.

Truth: Every place is a dangerous place, and that can easily be said of any city in the world. I remember being a little bit timid the first time I went into the city, and I discovered, to my surprise, that I felt right at home. I’ve been in big cities all over the world, and I often explore them alone on foot armed
with nothing but a map and a camera. That comes from tagging along with
my husband, who often works while I play, but even before I met him, I was exploring cities on my own. I personally find there’s nothing more empowering, no better way to make a city my friend that to follow my nose, 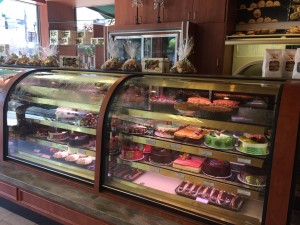 and my map. And NYC is easy on both. Common sense is the key in the Big Apple just like it is anywhere else I’ve ever been.

On both trips I’ve relished the days I’ve had to explore alone in a city that never fails to inspire. The very best parts of NYC are the opportunities to follow my nose, to get lost in the thoughts and ideas and inspiration that flow from being anonymous among the throngs. I get to be the invisible observer, a voyeur with a purpose. 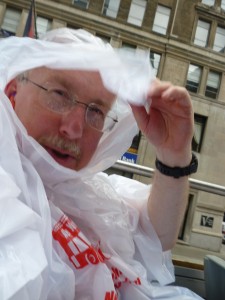 “Did he say anything about me?”

Young man behind me on the train talking on his mobile:

“Dad, I underestimated how much money I needed. No! No, I’m find, I’m all right, don’t worry. I just 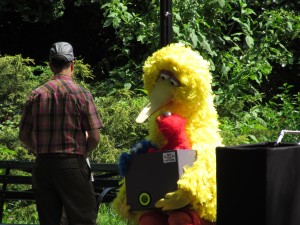 underestimated how much New York would cost.”

A frantic- looking young woman decked out in evening wear at 10:30 in the morning, running to catch the subway.

Cynthia and I had great fun making up a story about her situation while we wandered around Midtown Manhattan.

There you go! Myths busted! In my opinion, there are two big dangers in NYC. The first is being too timid and missing the good stuff. I was shocked at the number of tourists I saw seeking out McDonalds or Sbarros (and yes tourists are as easy to pick out in NYC as they are the world over. I’m sure I am too, though I did remember to remove my bin-bag rain poncho when I left the tour bus.) 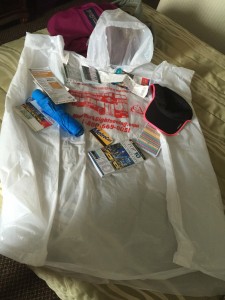 The second, and the biggie for me, is falling totally in love with the city, even as I’m melting in the 100 degree heat or
doing the back stroke in a glorified garbage bag in a rainstorm in an open topped bus. I’m a tourist. I know that’s completely different from living in a place and dealing with all the little niggles and irritations local folks deal with all the time, but then that’s part of the fun. I can have a love-affair with the Big Apple, let it tease me and entice me and seduce me for one week a year, and I can come home smug in the fact that I spent a delicious, inspiring, tantalizing few days in the arms of one of the coolest cities on the planet.